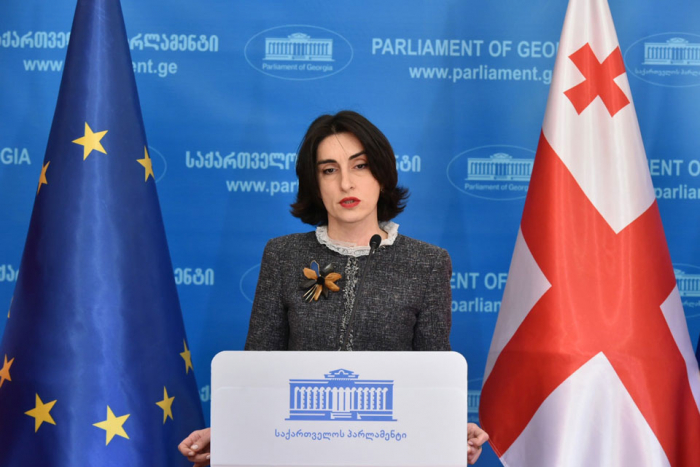 The fact that the European Commission officially recognized Georgia’s European perspective for the first time is to be welcomed, said Maka Bochorishvili, Chairperson of the Georgian parliamentary European Integration Committee, at the plenary sitting.

“Last week, the European Commission published the assessment of the three associated countries and recommendations to the European Council regarding the granting of EU membership candidate status in response to applications from Georgia, Moldova, and Ukraine.

I will not dwell on the geopolitical context in which the European Union is considering the three applications. For all three countries, the European Commission has named preconditions that need to be met in order to qualify for candidate status.

In the case of Georgia, unlike Ukraine and Moldova, the European Commission – having recognized Georgia’s European perspective – recommends that we fulfil the preconditions before being granted candidate status.

Of course, the fact that the European Commission officially recognized Georgia’s European perspective for the first time is to be welcomed. This is undoubtedly an important step forward on the path to EU integration, which allows Georgia to take part in the EU accession process.

The obvious progress made by Georgia in terms of the implementation of the Association Agreement remains a fact, which will always serve as a solid foundation for our further advancement,” she said.

According to Maka Bochorishvili, Georgia aspires to become a candidate country for EU membership together with Moldova and Ukraine, and to advance in this process in a timely manner. She further explained that no country will be able to do this without fulfilling the preconditions.

“On 24 June, the European Council will hold a discussion and the 27 EU member states will make a political decision regarding Georgia, Ukraine, and Moldova.

The recent visits, meetings, and consultations held in the capitals of EU member states have served the purpose of allowing us to explain to our partners the expectations that exist in Georgia and the importance of a bold geopolitical decision by the European Union in today’s difficult geopolitical environment.

One thing is clear regardless of the decision the European Council will make on the 24th: In order to make further progress on the path to EU membership, Georgia must take steps to implement the European Commission’s recommendations, some of which are already part of the Association Agenda.

At this crucial moment, the European Union told us once again that we must learn to respect one another and try to work together on issues that are needed for the future of the country and its integration into the European Union.

No one is asking us to agree on everything but maybe, for the sake of the future of this country and our children, we could transform loathing and hatred into constructive, action-oriented criticism and replace destructive and futile initiatives with those that will actually help the country’s EU integration.

Maybe we could try to respect the state and its institutions instead of attempting to trample them. Success on the path to EU integration is unimaginable without robust institutions. Maybe we could try to find, in this building, the spirit that we were expecting from a large part of the opposition for 100 days after the signing of the Charles Michel Agreement.

Against this backdrop, calls to overthrow the authorities that have been made in recent days are completely contrary to the message we have received from Brussels. Now is not the time to try to separate the authorities and the people, nor is it the time to point fingers and insult the voters who stand behind every one of us. This crucial moment in the history of Georgia requires proper assessment and engagement in political processes with greater responsibility,” she said.