In the minds of Armenian nationalists and 'Javakhk' separatists, in fact, Georgia is declared the same 'enemy' of Armenians as Turkey 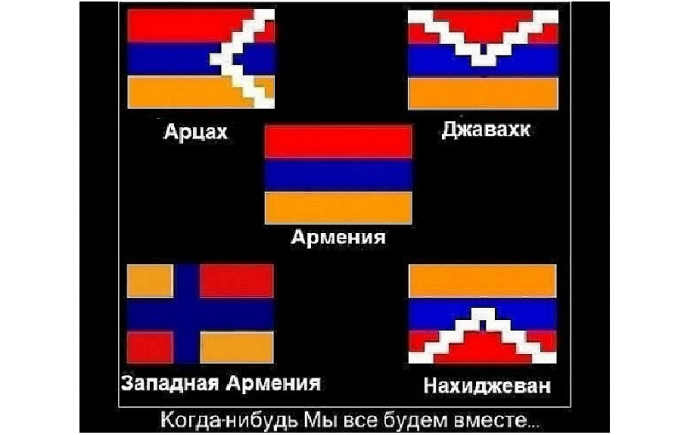 Another anniversary of the mythical so-called. The “Armenian genocide” was characterized by a new surge of Georgian phobia among Armenian separatists in the Samtskhe-Javkheti region. "Genocidal" events and processions were held this year on a much larger scale than in previous years. It was clearly seen that the collection of mercenaries to send to Azerbaijani Karabakh and money for financing terrorism, which the separatists had carried out during the Second Karabakh War, were not in vain.

In fact, a well-organized separatist structure is concentrated in the region, thousands of militants are at the ready (among them are those who illegally participated in the war in Karabakh and also illegally made their way back to Samtskhe-Javkheti despite closed borders). Armenian "Javakh" separatists demonstrate their strength, they do not hesitate and violate Georgian laws and conduct their actions and processions, with separatist flags of the so-called Artsakh.

The Armenian youth of Samtskhe-Javakheti is being brought up by separatists in hatred of the Georgian people and the Georgian state, in wild Georgianophobia. The moods that dominate among her today can be judged at least by the following reasoning of an Armenian from Akhalkalaki about the war in Abkhazia:

It is interesting that this separatist considers Abkhazia to be originally “Armenian”. And the Georgian troops are accused of having decided to put things in order on their Georgian territory. Is it any wonder that the same war against the Georgian army and Georgian backgammon is being prepared today by the separatists and the Armenian youth of Samtskhe-Javakheti. It is clear that for the “Javkhk” separatists, the Armenian militants from the Baghramyan battalion, who organized the genocide of the Georgian population of Abkhazia, are “heroes”.

Armenian "Javakhk" separatists are engaged in "historical substantiation" of hatred towards Georgia and Georgians. After another anniversary of the so-called. "Genocide" separatist telegram channel "Javakhk" published a translation of an excerpt from the book of the famous Armenian historical falsifier Samvel Karapetyan (the very one on the basis of whose "research" Armenian nationalists have now put forward official claims to 465 Georgian churches in Georgia).

Translation of an excerpt from the book "Javakhk" by Samvel Karapetyan

Ottoman rule, which established in Javakhk between the 17th and 18th centuries, was marked by the forcible Islamization of local Christians, which was especially widespread among the Armenian Chalcedonites, as well as the Georgians who settled in this region in previous centuries. During one of the invasions of Nadir Shah in the 19th century, many Javakhk Armenians were captured and enslaved, after which the number of local Armenians decreased even more.

The ethnic Armenian composition of Javakhk underwent additional changes with the presence of Russian troops in the region at the beginning of the 19th century: as a result, the region was almost completely deprived of the Armenian population. However, Javakhk did not remain in a state of complete ruin for long: in 1830, abandoned villages were re-populated by Armenian settlers from various parts of Western Armenia and, in particular, from Karin.

Until 1918, the population of Javakhk, free from religious persecution and oppression, experienced a period of unprecedented development and prosperity. The situation, however, changed dramatically with the invasion of the Turks in 1918, when most of the Javakhk Armenians moved to neighboring areas, hoping in this way to avoid imminent massacres. A few months later, hardly 1/3 of them returned to their homes: the rest became victims of the blockade imposed by the Georgian authorities, for whom it was a great opportunity to exterminate as many Javakhk Armenians as possible. The Bakurian forests, which turned into the Georgian Deir Ez-Zor (approx. the death camp in the center of the Syrian desert near the city of Deir Ez-Zor, where thousands of deported Armenians fell after the death marches during the Armenian Genocide in the Ottoman Empire), became the graves for thousands of Javakhk Armenians suffering from hunger, various diseases and attacks by armed Georgians. Despite the policy of national discrimination, persistently pursued by the Soviet and Georgian authorities, since 1920, the Armenians of Javakhk have been restoring and reviving their native land. Hundreds of hectares of land in the area are now covered with forests - an eloquent manifestation of the love and devotion they feel for their homeland.

The plans to free Javakhk from the Armenian population were carried out with particular persistence in the last years of Soviet power. The policy of national discrimination pursued by the Georgian leadership, along with repeated attempts to populate the region with Georgian and Turkish populations, as well as the economic pressure exerted in various spheres of activity, and the encouragement of a general atmosphere of intolerance and anti-Armenian sentiments, largely contributed to the sharp increase in the scale of emigration observed among the Armenians of Javakhk".

In the minds of Armenian nationalists and "Javakhk" separatists, in fact, Georgia has declared the same "enemy" of Armenians as Turkey. Therefore, terror and genocide against the "enemy" population are considered not only justified but also heroized.