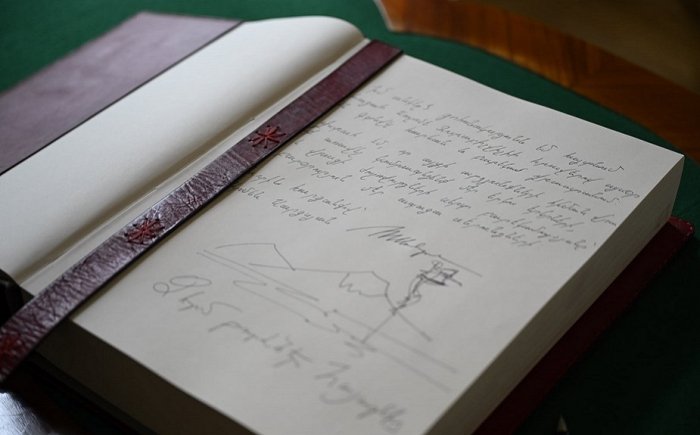 During his visit to Georgia, Armenian President Armen Sarkisian managed to organize an international scandal. He very carefully painted the Turkish Mount Agrydag, also known as Ararat, in the book of the honorary guests of the President of Georgia.

Georgian President Salome Zurabishvili posted on Facebook a photo from the guest book page at her residence. It shows the recording of the President of Armenia Armen Sarkisian, who accompanied the recording with a drawing with the contours of Mount Aghrydag (Ararat).

“I express my sincere satisfaction with the invitation of President Salome Zurabishvili to visit Georgia. I am sure that the results of this visit will strengthen the relations between the Armenian and Georgian peoples for the benefit of our future generations, ”Sargsyan wrote in the book, without specifying what the Turkish mountain he had drawn in general has to do with“ relations between the Armenian and Georgian peoples ”.

In order to understand the whole essence of this outrageous demarche, it should be noted that this is the first international visit of Armen Sargsyan after the 100th anniversary of the Moscow Treaty of 1921, which was hated by Armenian nationalists and revanchists, which confirmed the belonging of Agrydag (Ararat) to Turkey, and Batumi to Tbilisi.

Let us remind that recently Armenian nationalists not only declare that the Bolsheviks “gave” the “Armenian Mount Ararat” to the Turks, but also more and more often propagandize that it was “exchanged” for Batumi. In light of such historical nonsense, which is nevertheless widespread among Armenians, what did Sargsyan want to say when he painted Aghrydag (Ararat) in the book of honorary guests of the President of Georgia? Is it possible that he not only claims this Turkish mountain but also does not recognize Batumi as Georgian? It turns out like this!

Turkish affiliation Agrydag and Georgian Batumi, Samtskhe-Javakheti are recognized by the same treaty - Moscow 1921. Indeed, according to the previously concluded Sevres treaty, which would have been canceled by the Moscow treaty of 1921, Armenian nationalists claimed both Batumi and Samtskhe-Javakheti...

Let us also remind that the recently liquidated separatist "Artsakh", organized by the Armenian occupants on the Azerbaijani lands seized until recently, "recognized" the so-called. "Independence" of the separatist Abkhazia (where the Armenians have already become the majority), and the so-called. "South Ossetia". Those. In fact, Armenia, in support of separatism and territorial claims, consistently advocates the division and dismemberment of Georgia.

It turns out that not only Abkhazia but also another Georgian autonomy - Adjara, do the Armenian nationalists consider "their" Armenian? Maybe Sargsyan also hints about this with his drawing? There are many messages in the drawing, which, of course, those initiated into such subtle hints understood immediately.

The President of Armenia has never shown himself as an "artist" before. But he is known as a person who has extensive experience in diplomatic work and is familiar with international law. He cannot but understand that his drawing would not otherwise be interpreted as an encroachment on other people's territories.

The highest peak in Turkey, Agrydag or Ararat, is an internationally recognized Turkish territory. The fact that Armenian nationalists are absolutely illegally claiming it, like other regions of Eastern Turkey, is the same nonsense as the claims of the same nationalists to Georgian Samtskhe-Javkheti and Tbilisi.

The moment of Sargsyan's demarche was chosen carefully. After all, now the question of unblocking Zangezur and restoring normal relations between Armenia and its neighbors, Turkey and Azerbaijan, is head-on. And at this time, during a visit to Georgia, a country that is one of the key trade-economic partners of Turkey and Azerbaijan in the Eurasian transit, Sargsyan provocatively "stated" his claims to Turkish lands.

With his pictorial diplomatic attack, Armen Sargsyan is thus trying to "drive a wedge" into fruitful and mutually beneficial Georgian-Turkish cooperation. In general, he wants to "block" all routes through the region, and again return to war and confrontation.

Also, according to Armenian media reports, in particular Sputnik Armenia, at a meeting with Zurabashvili Sargsyan discussed security issues in the region, taking into account new realities, in particular, "against the background of the consequences of the military aggression against Karabakh unleashed by Azerbaijan with the support and participation of Turkey."

The impudence of Sargsyan's statements regarding the alleged aggression of Azerbaijan against its own territory - Karabakh, previously occupied by Armenia, is simply amazing. Such statements repeat one to one the notorious statements of the Kremlin propaganda regarding the alleged "aggression of Georgia" against its own territory - the Tskhinvali region, in the terminology of the Kremlin propagandists and Armenian nationalists.

Sargsyan began to draw other people's mountains, also knowing perfectly well that from April 15, Russia went to a demarche, cutting off air traffic with Turkey. Allegedly for reasons of "the danger of coronavirus" (which was greeted with joy by all Armenian media). But everyone understands that the Kremlin made such a decision after Turkish President Erdogan, at a meeting with Ukrainian President Zelensky, confirmed Turkey's unconditional support for the territorial integrity of Ukraine and Ukraine's ownership of Crimea. The fact that the claims to someone else's mountain are also timed to this moment is also another hint that the Armenian nationalists do not put internationally recognized borders at all.

Stating in a figurative diplomatic way about Armenia's territorial claims against Turkey anywhere, but during his official visit to Tbilisi, President-"artist" Sargsyan, in fact, made it clear that Armenia will continue to disregard all norms of international law, deliberately provoking new conflicts and problems in the region.