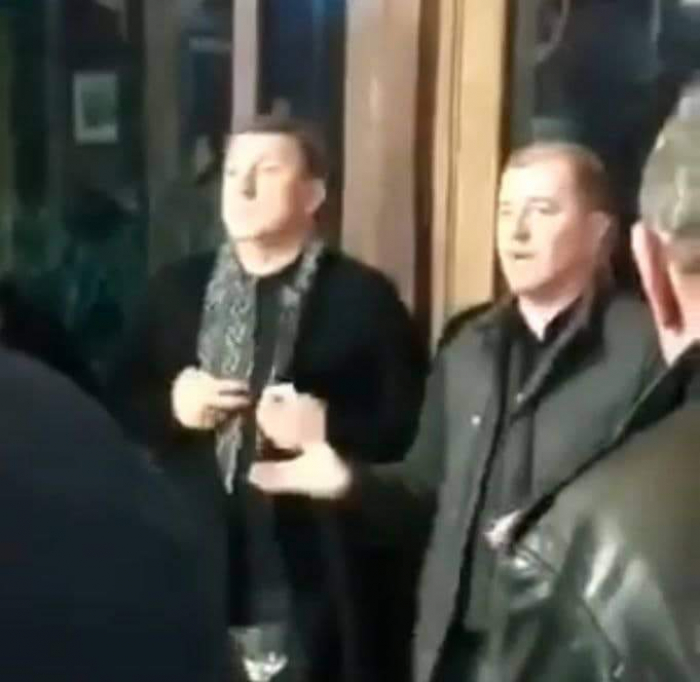 Armenian criminal mastermind Ruben Tatulyan, the de facto "master" of separatist Abkhazia, and Abkhazians themselves before him as in the separatist territory (and in the Russian Federation "no one calls them anything"), demonstrated a recent episode reported by the Abkhazian telegram channel Apsny:

"on November 24th Abkhazia Centre" telegraph channel published a photo of Sochi-based businessman and friend of the current authorities of Abkhazia Ruben Tatulyan and opposition politician Adgur Ardzinba. No comments were made to the photo. Connoisseurs say the photo was taken on November 22nd in the famous restaurant Gagripsh. Then Tatulian was having lunch with his Abkhazian friends, when supporters of Adgur Ardzinba showed up at the restaurant and started insulting Tatulian. However, Tatulian and his Abkhazian friends not only managed to calm down Ardzinba's supporters but also demanded that he appeared for a conversation. In about an hour the leader of the Abkhazian opposition arrived there with supporters in the number of 150 people. In a verbal duel Tatulian managed to defeat Ardzinba. As a result, the credibility of the opposition leader was severely shaken. And, apparently, there will be a fight for the post of leader in the opposition camp.

So what conclusion can be drawn from this information? Abkhazian opposition leader Adgur Ardzinba has "backed down" in his attempt to counter the dominance of the Armenian lobby and distribution of Armenians with separatist "passports"? In fact, he capitulated in this matter and from now on there is nothing that can prevent mass resettlement of Armenians in Abkhazia. Internal Abkhazian forces that tried to resist this are morally broken and trampled.

Moreover, Ruben Tutulyan humiliated him, and publicly, by literally trampling his authority. Ruben Tutulyan was drinking like a rightful "master of Abkhazia" in a restaurant that belongs to his compatriots just like any other more or less significant business on the separatist territory and then "aborigines" with a crowd of 150 people appear and demand something more. The "boss" had to put them in their place. The entire crowd of 150 people. Probably very offensive and humiliating expressions, which even Abkhazian online resources are afraid to tell, so as not to traumatize fellow countrymen. And the crowd of Abkhazians together with their leader Adgur Arzinba "swallowed the offence".

After all, obviously there were far fewer than 150 Armenians and "Abkhazian friends" (clearly of Armenian nationality) who were dining with Ruben Tatulyan at the time. However, they are in power, and Tatulian clearly explained to Abkhazians that what would happen to them and their families if they continued to prevent those who already felt themselves to be "masters" on their land from feasting and "enjoying life.  Roughly speaking, the Armenian criminal authority simply "wiped their feet" on the crowd of 150 Abkhazians.

Most interestingly, the episode took place on the eve of the congress of a new Abkhazian opposition civil association Assemblage of Social and Political Forces that was held in Sukhumi on November 23rd, 2022 where one of the main speakers was Adgur Ardzinba who had just been humiliated by Tatulyan.

Hence, it is understandable why all the participants at the congress avoided the issue of Armenian domination and continued to refer to the "Georgian threat", albeit not as vehemently as before. Abkhazians are simply afraid of Armenian nationalists. And at that they are panic-stricken, if one single Armenian criminal authority can humiliate a crowd of 150 Abkhazians.

Well, the masters of Abkhazia not only allow, but order to Georgians, making anti-Georgian rhetoric a prerequisite for holding congresses and other public events. However, the Abkhazians are already doing so without much enthusiasm, which was felt at the meeting of November 23, 2022.

The conclusion from the episode with Ruben Tatulyan and the crowd of 150 Abkhazians that he humiliated and put down is simple - without Georgia and the brotherly Georgian people Abkhazians will be nullified in 20 years. Their occupants and aliens will continue to humiliate and trample them until they are completely destroyed.