Is the alliance of " Qom (also spelled as "Ghom", "Ghum", or "Qum") and Echmiadzin" the last hope of Armenian revanchists? 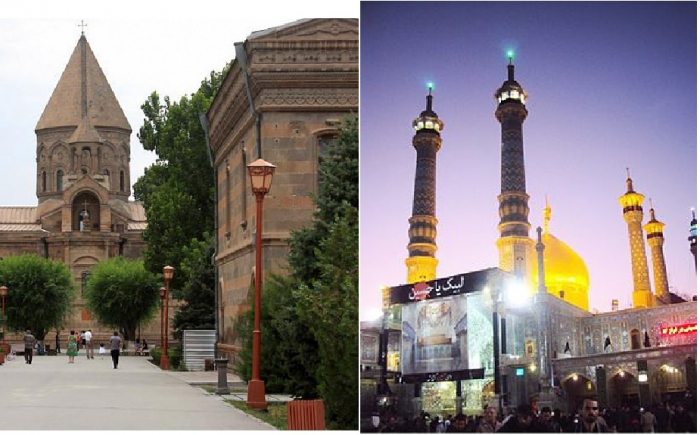 A very significant event took place between the separatist and Armenian nationalist rally on 30 October 2022 in Khankendi, Azerbaijan, under the cover of Russian peacekeepers, demanding the separation of "Artsakh" from Azerbaijan and a similar rally of Armenian revanchists in Yerevan on 5 November 2022.  Russian President Vladimir Putin awarded Russian Catholicos of All Armenians Garegin II with the Order of Honor. This was announced by the Kremlin press service on November 4. It is also very symbolic that by the same decree Vladimir Putin awarded the Order of Courage to the 336th Separate Guards Brigade of Russian Marines.

It becomes clear what forces the revanchists and Armenian nationalists are staking on, who are trying once again to raise the topic of "miatsum" and organize a new occupation of Azerbaijani Karabakh by Armenia - on the clergy and the Russian army. The Russian army is now bogged down in Ukraine and so far it simply cannot engage in Armenian revanchism, despite all the wishes of the powerful Armenian lobby in Moscow. However, on the "spiritual line" in the South Caucasus, the most unexpected surprises are possible.

Let us start with the fact that the Armenian Apostolic Church (AAC) project itself, with its centre in Echmiadzin, is unique. It has long had very little to do with Christianity, but has become a "model" project which, by poisoning an ethno-religious group scattered in the East with nationalism, has created an "Armenian nation" with an "ancient history" invented and falsified from start to finish. Etchmiadzin has long been a vehicle for the interests of both the Vatican and Vatican-linked major geopolitical players in the East.

Meanwhile, the Vatican has lately been clearly betting on ecumenism, which it understands as "the unification of all religions under the patronage of the Pope. And one of the main "ecumenical players" in line with this policy is Echmiadzin. It seems strange first of all because there is no religious concession more Islamophobic than the Armenian Church and there is no more Islamophobic nationalism than the Armenian one. That said, Echmiadzin maintains excellent relations with the Iranian ayatollahs, whose main spiritual centre is known to be the holy Shiite Muslim city of Qom in Iran.

To a large extent, political power in Iran is not so much in Tehran (where it too belongs to the Ayatollahs) as in Qom. "Secular" functionaries of the Tehran regime are totally dependent on the ayatollahs for determining the entire policy of the country. And this policy is in reality infinitely far from protecting the interests of Muslims - otherwise how can one explain Iran's support for Armenia's occupation of Muslim Azerbaijani lands and the expulsion of over 1 million Shiite Muslims from their home towns and villages.

"The alliance of Qom and Echmiadzin" is becoming a spokesman for geopolitical centres such as the Vatican and Paris in the Near and Middle East the more and more. Amid the weakening of Moscow, they are trying to find a "replacement" for the Russian military presence, trying to organize a new system of geopolitical "checks and balances", including in the region of the South Caucasus.

Unfortunately, some sincere Azerbaijani Shiite believers do not yet fully understand that the spiritual "authorities" in Qom have long ago, in fact, betrayed them. And at any time they will be sacrificed or made exiles at the request of their "friends" in Echmiadzin and the Vatican, as it happened with the Azerbaijanis of Karabakh, Zangezur, Iravan and other historical Azerbaijani regions, seized by Armenian nationalists. Apparently, marginal "pro-Iranian" cells in Azerbaijan and in Nakhichevan, which has been blockaded by "friends of the Iranian ayatollahs" for more than three decades, were "stirred up" by orders from Qom and Tehran, and "as a result" in recent days provocative "junk" regarding Iranian claims to Nakhichevan unexpectedly appeared. Yes, and the Armenian disinformation machine has not stopped for a minute so far and is working on these "throws".

"Recently in a number of social networks the so-called "Nakhchivan People's Movement of Iran", a fictitious organization, published an appeal on behalf of the local population addressed to the government of Iran, which states that allegedly due to the fault of Azerbaijani authorities the population of Nakhchivan Autonomous Republic experiences serious difficulties in security, science and food issues and wishes to voluntarily join the Islamic Republic of Iran. At the same time they ask the Iranian government to deploy Iranian armed forces in Nakhchivan," it was reported.

The SSS stated that these provocations targeting Azerbaijan are seriously investigated and appropriate measures are taken:

"Publication of such nonsense and provocative information by prominent circles that stand in a hostile position towards our country is unacceptable and causes disgust among our citizens. The Azerbaijani state and its political leadership is a guarantor of the security and prosperity of the entire country, including the Nakhchivan Autonomous Republic, which is an integral part of the country," the Azerbaijani State Security Service stated.

The State Security Service of Azerbaijan diplomatically does not directly indicate "along which line" the provocation with the so-called "Nakhchivan People's Movement of Iran" was organized. But taking into account that overwhelming majority of Muslims in Nakhchivan Autonomous Republic are Shiites and historically Nakhchivan along with Iravan was a "Shiite stronghold" of the same Safavid state - it is not difficult to guess. The provocation was prepared "along spiritual lines"; the Ayatollahs in Qom and Tehran are unscrupulously exploiting the religious feelings of the people, forcing them, in fact, to get involved in ventures suicidal for their country and people.

And steps to destabilize Nakhichevan at the highest level, in Qom and Tehran, are naturally coordinated with Echmiadzin, which has recently begun to show its activity, including in the immediate vicinity of Nakhichevan, near whose border in Jermuk on November 7 was the recently awarded the Russian Catholicos Garegin II with a kind of "visit to the border zone". Before that Garegin II "seconded" the head of the Tavush diocese of the Armenian Apostolic Church, Bishop Bagrat Galstanyan for the revanchist rally in Yerevan on November 5, 2022.

It was Bishop Bagrat Galstanyan who began the so-called "nationwide rally" of the revanchists in France Square in Yerevan with a prayer and a "word of blessing".

"...Armenians all over the world, no matter how broken, have the right to have rights, as more blood has been shed on our land than water has been used for irrigation and this right is undeniable. "Artsakh will never be a part of enemy states," Bagrat Galstyan said, making it clear that Echmiadzin neither recognizes nor accepts internationally recognized borders in the South Caucasus nor Azerbaijani sovereignty over Karabakh.

It turns out that everything is interconnected. Even when official Yerevan grudgingly accepts the signing of a peace agreement recognizing the territorial integrity of Azerbaijan, Etchmiadzin continues to lay claim to Karabakh. Qom, through its agents, is clearly beginning to claim Nakhchivan, although official Tehran does not seem to make such claims. This means that the revision of borders can begin "along the lines of the clergy", which is extremely dangerous and fraught with the risk of new bloodshed.