Transit for Armenia through Abkhazia without de-occupation and return of refugees? 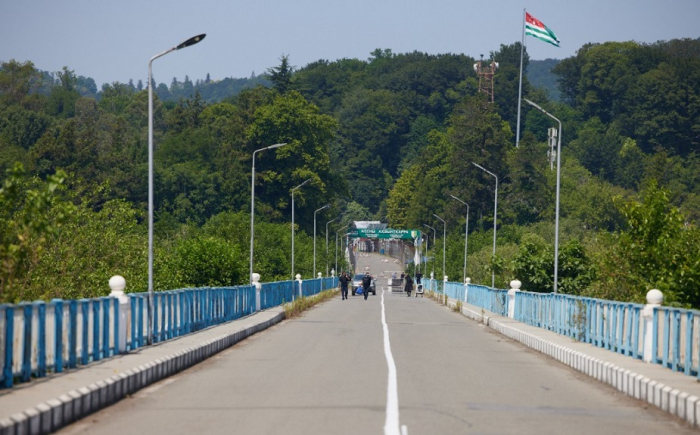 Russia's appropriation of Pitsunda has somewhat "overshadowed" another much more important process that is currently taking place in and around separatist Abkhazia. Namely, a new attempt to organize cargo transit through Abkhazia for Armenia without its deoccupation and return of Georgian refugees to their homes.

Should such transit be organized, there is no doubt that a new "great resettlement of Armenians" will begin on the shores of the Black Sea in houses and flats of expelled Georgians. Of course, after that Georgia will have to forget about the return of Abkhazia and return of refugees, and Abkhazian people will simply vanish from the face of the earth. All the more that at the same time (and this is practically a done deal) Russia plans to annex Abkhazia through the so-called "union state" and to allow a massive purchase of land there.

A journalist from Abkhazia, Inal Khashig, recently shared information about the establishment of a so-called "working group" under the separatist government in Sukhumi to transit cargo through Abkhazia to the non-occupied part of Georgia. Obviously, the transit of cargo further to Armenia. At the same time, according to the journalist, the working group has determined for itself that such transit is necessary.

The working group is headed by Valery Papba, aide to the separatist "president". The working meeting was attended by representatives of the separatist "ministry of economy", "customs", "border service", airport, railway, Sukhumi sea port.

It was stressed at the meeting that "Abkhazia has historically been a transit corridor. And now this is becoming quite relevant.

Inal Khashig discussed the arguments of the supporters of an early "Transit Opening":

"Over the last 30 years, we have become something of a dead end. All goods follow the same route: from Abkhazia to Russia from Russia to Abkhazia. Abkhazia practically did not earn any money from transit.

After February 24th, when confrontation between the West and Russia reached its climax and a huge number of sanctions were imposed on Russia, a global transformation took place in logistics and logistics centres.

Now that the processes of organising new logistics routes are taking place, it is quite silly to watch the real money Abkhazia needs floating away from us.

Especially when Russia is under EU sanctions, the Turkish direction is becoming one of the main transport hubs, at least in our region.

On the other hand, there is an opportunity to make money from road transit as well. On trucks, heavy goods vehicles. Now the flows have increased.

The working group recommended the President to lift the existing restrictions of the Inguri checkpoint.

This will give us an opportunity to unilaterally receive various transit cargoes that are coming from Armenia, Turkey. This also concerns various goods from Georgia. After all, we have the Gosstandart, which should certify these goods according to Abkhazian rules.

Obviously, transit will not only bring us financial dividends, but without this transit it will be difficult for us to develop our transport infrastructure. This applies both to airports and roads," the separatists say.

The organizers of the transit have not said a word about the return of Georgian refugees, or about the rights of the disenfranchised Georgian population of the Gali district. It seems that they do not intend to reckon with Georgia and its interests at all and present it with a fact:

" We do not hold any consultations with Georgia. Given that we are an Abkhazian state and we ourselves determine what goods come in and out of our territory.

We should also take into account the fact that Turkey is home to our large diaspora, which is interested in organising such transit, as it activates business in which representatives of the Abkhaz diaspora will be involved.

Moreover, it makes the route to Abkhazia much cheaper, given that airfares have risen sharply.

This route from Turkey via Georgia to Abkhazia by car becomes much cheaper for members of the Abkhaz diaspora.”

Such "heartwarming" care of the separatists towards "Abkhazian diaspora in Turkey" while in almost 30 years of their separatist "independence" they failed to return even 3 thousand descendants of Muhajirs can be explained very easily - the Kremlin needs to dictate its conditions for opening of the Zangezur corridor in the same Turkey. Organizing transit through Abkhazia will allow the Russian leadership and the Armenian lobby that stands behind it "not to hurry" with opening of the Zangezur corridor, setting new and new conditions. Since they will already have transit to Turkey through Abkhazia and Georgia that was permanently deprived of its lands. So there is no doubt that the project of "Abkhazian transit" was launched at the highest level in Moscow.

"The "working group" has already recommended the separatist "president" Aslan Bzhania to lift the existing restrictions on operation of the Inguri checkpoint on the line of demarcation. However, Georgia, in any case, should not fall for the ploy of the Kremlin and the separatists. Transit through Abkhazia is possible only after its deoccupation and the return of refugees and nothing else. Otherwise, by agreeing to transit today, Georgia risks losing Abkhazia forever.