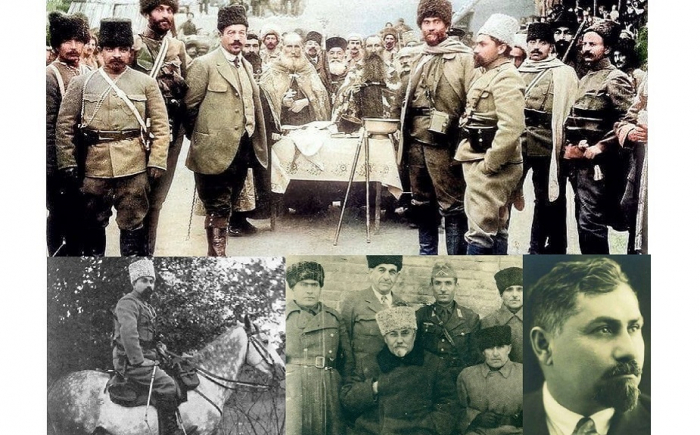 Paradoxically, against the background of Russia's aggression into Ukraine under the pretext of "denazification", the Armenian "Javakheti" separatists hoping for Russian military aid are glorifying Nazi criminals and executioners. It should be reminded that the Armenian nationalists have two main "heroes"-Nazis: the founders of the "Armenian Legion" of SS Garegin Ter-Harutyunyan (Nzhdeh) and Drastamat Kanayan (Droh or General Droh).

Drastamat Kanayan began his bloody path with the dastardly assassination of the outstanding son of the Georgian people, Baku governor Mikhail Nakashidze, in Baku in 1905. Later, during the First World War Drastamat Kanayan led gangs of Dashnak thugs, participated in massacres and genocide of Turkish and Muslim civilians, including Adjarians, Lazs and other Georgian Muslims.

During the Georgian-Armenian war, Drastamat Kanayan commanded Armenian troops trying to capture the southern regions of Georgia and advancing on Tbilisi. However, the "terrorist commander", who was a perfidious murderer and was only able to "fight" with civilians, was totally defeated and Armenian aggressors were stopped and thrown back.

Nevertheless, it was Drastamat Kanayan's attempt to seize Georgian lands by armed force that inspired the Armenian "Javakhk" separatists today.  This is why they have recalled his birthday on their Javakhk telegram channel ( https://t.me/jvkhkk/2581 ):

"Armenian statesman and military leader Drastamat Kanayan (Droh) was born on 31 May 1884. He was part of the national liberation movement and commanded Armenian units.

The separatists note that the "Armenian population", both of Samtskhe-Javakheti and Tbilisi, are "in need of protection". ... and "is waiting for liberation", or rather aggression from outside in order to split up and destroy the Georgian state. What the "protection of the population", or more precisely, the separatists of Donbas has led to, we see today very well in the war in Ukraine.

The comments of Armenian nationalists under the post dedicated to Droh are very interesting:

" We should have taken Tbilisi and not given it away. Maybe now the Armenian community in Tbilisi has not been wiped out".

"The Armenian community in Tiflis is underestimated for nothing now - it is much more organised than in some other diasporas".

At the beginning of the last century, who predominantly inhabited this city?

Who built most of the buildings in this city?"

"If the city was built and predominantly populated by Armenians, why isn't it an Armenian city?"

Yes, Armenian nationalists and "Javakhk" separatists consider the Georgian capital an "Armenian city". And they would call on anyone to conquer it. After all, if Droh allegedly "did not have a goal" to seize Tbilisi, now his followers may get it. All the more so since the cult of fascist criminals Droh and Nzhdeh, the propaganda of the most blatant Nazism by Armenian nationalists is combined with provocation by the Armenian lobby of Russia to aggression against neighbouring sovereign states under the cynical pretext of "combating Nazism".

Today "Javakhk" separatists glorify outright Nazi criminals who fought against Georgia and killed Georgians. After all, Drastamat Kanayan started killing Georgians and Muslims and continued them on a much larger scale in the service of Hitler, taking part in punitive operations of the Nazis against civilians and in the Holocaust of the Jewish people. But this executioner is a " Hero" to the "Javakheti" separatists.