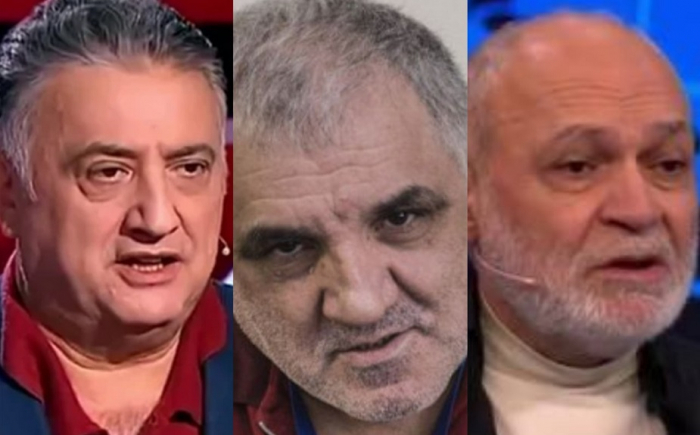 The Armenian telegram channel Bagramyan26 (https://t.me/bagramyan26/38382) was very frank about the representatives of the Armenian lobby, who are now the "mouthpieces" of the Kremlin propaganda:

"There are such names in the Russian media field: Semen Baghdasarov, Aram Gabrielyanov, Andranik, Migranyan, etc.

Russian circles often try to use these characters to allegedly influence domestic political processes in Armenia. But in reality any such attempt is doomed to a 100% failure in advance and is extremely negative for the Armenian-Russian relations.

Why? The reason is very simple.

Everyone in Armenia (authorities, opposition, people) without exception hates Semen Baghdasarov, Aram Gabrielianov, Andranik Migranian and other representatives of this "breed". Any public utterance by these beings about Armenia and Armenians causes only disgust and hatred in Armenian society.

Using their genetic background, these comrades actually do everything to act against the state of Armenia, to harm Armenia and to strike at the state interests of Armenia. In Armenia, these hateful individuals are perceived solely as enemies of the statehood.

And when these people are used on Russian platforms, it instantly hits the Armenian-Russian relations. No one but them, not even the "Soros", can spread anti-Russian sentiments in Armenia as much as the representatives of the aforementioned "figures".

So we urge all Russian platforms, on Armenian and Armenia-related topics, by no means to provide a platform for these individuals, unless, of course, the aim is "to want the best, but to get the same as always". They are the main enemies of Armenian-Russian relations and the most powerful generator of Russophobia."  End of post.

I would like to clarify a little - Baghdasarov, Gabrilyanov and Migranyan are doing everything to prevent Armenia from building a normal civilised state, building mutually beneficial and equal relations with its neighbours. The Moscow Armenian lobby is against a peaceful Armenia that has fundamentally renounced claims to foreign territories and the ideology of hatred towards neighbouring peoples.

"Armenia" Semyon Baghdasarov, Aram Gabrielianov, Andranik Migranyan is an aggressive, perpetually at war and trying to seize the territories of its neighbours, led by the utterly corrupt Karabakh clan. Such an Armenia, of course, is simply doomed to be dependent on the Armenian lobby in Russia, which supports such aggressive revanchist policies.

This kind of Armenia, the times of thieves, criminals and murderers of Kocharian and Sarkisian, is "close and understandable" to Moscow's Armenian propagandists. But this very Armenia was initially doomed to defeat and disgrace. The 44-day war demonstrated this. Had Sarkisian or Kocharian been in power in Armenia at the time, the defeat of the Armenian military would also have been inevitable, but much more disgraceful and with a much higher death toll.

The Armenian people, even if infected with nationalism, subconsciously understand that the Armenian lobby in Moscow, with their tired old nationalist slogans, will lead them nowhere but to new victims, a new national disaster and humiliation. This is especially evident today, when Russia, dragged into the aggression against Ukraine by the efforts of the same Moscow-based Armenian lobby, disgraced itself.  The "blitzkrieg" with the intention of "taking Kiev in three days", which those who listened to Baghdasarov and Simonyan had seriously hoped for, turned into a long and bloody war, weakening Russia. As a result, the Russian Federation is simply no longer able to support the exorbitant revanchist ambitions of Armenian nationalists in the South Caucasus.

Meanwhile, the same Semen Baghdasarov, Aram Gabrielyanov, Andranik Migranyan, Margarita Simonyan and Tigran Keosayan continue to agitate for a senseless bloodbath in Ukraine. They also continue to bet on the return to power in Armenia of the revanchists hated by the Armenian people.

But the families in Armenia, who lost their sons because of aggressive policies of Kocharyans and Sargsyans to seize foreign lands, begin to understand who the main culprit in this. And the more the above propagandists persist in imposing "their vision of the future" for Armenia (with a blockade, poverty and perpetual war), the more the Armenian population rejects it.