Armen Gasparyan for the extermination of Ukrainian civilians 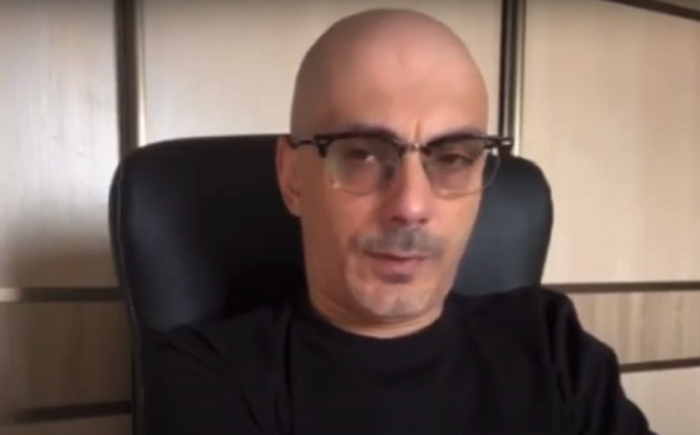 Political scientist Armen Gasparyan has been touting himself as a "great Russian patriot" for a very long time. Of course, his "Russian patriotism" is aimed at using Russia to "reshape the post-Soviet space" according to the models of Armenian nationalists.

In particular, he is particularly hostile and hateful towards Georgia. Armen Gasparyan spoke about the need for Russia's complete annexation of not only the Georgian Abkhazia and Tskhivali regions, but the entire Georgia. Armen Gasparyan was engaged in blatant anti-Ukrainian propaganda and, along with other Armenian propagandists, dragged Russia into the adventure of aggression against Ukraine.

For more than two months Russian troops have been fighting in Ukraine, suffering huge losses, but have not been able to occupy any regional centre except for Kherson, which was captured on the first day of aggression.  On the night of April 24 to 25, 2022, strikes were launched in the vicinity of Bryansk, already on the territory of the Russian Federation itself. This resulted in fires at the largest oil depot in western Russia and a military unit, and damage to the railway.  Ukraine has not claimed responsibility for what happened; everyone is well aware that perhaps the aggressor itself is launching strikes in order to arouse mass negative feelings among ordinary Russians, to raise the "degree of hatred" against Ukraine. The Russian Federation, represented by its leadership, did this more than once during the second Chechen war, blowing up houses and thereby obtaining a "reason" for an extermination war against the Chechen people.

This was followed by a "hurrah patriotic howl" on Russian social media demanding "retaliation", in particular strikes on Kiev's "decision-making centres" - i.e. the buildings of Ukrainian state bodies. The Kremlin has long threatened the Ukrainian leadership with such strikes. But Armen Gasparyan, on the second day after his compatriots celebrated the anniversary of the mythical "genocide", displayed the bloodthirstiness typical of the nationalists of the "long-suffering people" to the full extent.  Gasparyan called for a "harsh response" - strikes on Ukraine's transport infrastructure, explicitly stating that civilians would be killed as a result. But he is somewhat unconcerned by this. He actually calls for the extermination of the civilian population of Ukraine:

And today, Armen Gasparyan, as a "great Russian patriot", calls for the murder of the brotherly (which has long been no longer brotherly as it turned out) for the Russians Ukrainian people, calls for an all-out war against Ukraine and the extermination of the population. Although, then the whole of Russia will have to answer for the crimes against humanity committed on the "advice" of the likes of Armen Gasparyan.