Armenian looting of Crimea is possible "on a particularly large scale" 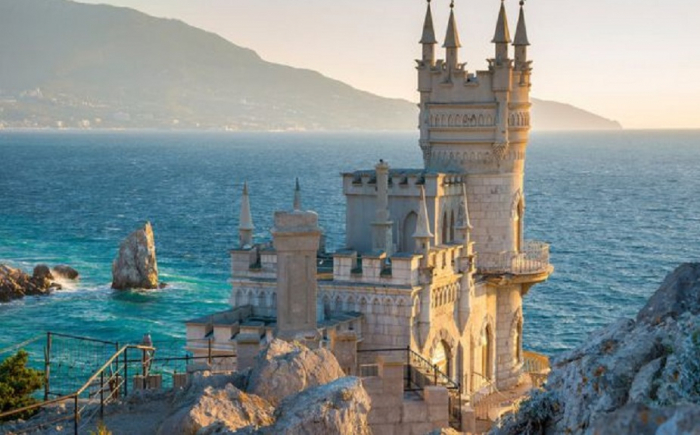 At a time when the attention of the world is riveted on Russian aggression against Ukraine, Armenia supports this aggression and questions the territorial integrity of the Ukrainian state. With the permission of the government of the Republic of Armenia, the so-called "Crimea Days in Armenia" were held in Yerevan on 4 April 2022 and the Armenian public was presented as a "subject of the Russian Federation".

During a visit to Yerevan by a delegation of the Russian-occupied Crimea (i.e. representatives of the occupation administration), representatives of Russian tourist firms illegally operating in the Crimea and Armenian travel agencies signed cooperation agreements. This was reported on April 5, 2002, by Irina Kiviko, the so-called "deputy prime minister - minister of finance of the Republic of Crimea.

Among the signatories are the Crimean Winepark at the Mriya Hotel and Belaviaservice, one of Armenia's largest tour operators.

"Crimean and Armenian businesses are ready to work with each other," Kiviko pointed out.

Under Ukrainian law and international law, there is no "republic of Crimea" but the Autonomous Republic of Crimea as an integral part of Ukraine, now illegally occupied and annexed by the Russian Federation. Just as the Autonomous Republic of Abkhazia is an integral part of Georgia. And there is one thing in common between the two Russian-occupied regions - they are of heightened and unhealthy interest to Armenian nationalists and the Armenian lobby.

In particular, the same Irina Kiviko announced that already this season tourists from Armenia can come to the occupied Crimea "for rest and treatment". Naturally, the representative of the occupants did not specify that from the point of view of Ukrainian legislation, such trips without the approval of the Ukrainian authorities are considered a criminal offence.

Nevertheless, the Armenian authorities give the go-ahead to ethnic Armenians to violate Ukrainian law on a massive scale. And this is another unfriendly, if not outright hostile, move by Yerevan towards Ukraine since Russia's aggression against the country.

We already know facts of transfer of Armenian Su-30 planes to fight on the side of Russia against Ukraine, as well as transfer of Abkhazian Armenians and fighters of the Baghramyan battalion from the occupied Abkhazia to fight on the side of the aggressor in Ukraine. Abkhaz Armenians, in addition to Russian and separatist so-called "citizenship", mostly also have citizenship of the Republic of Armenia.

Armenian media and telegram channels do not hide their joy at the Russian occupiers' strikes on facilities in Ukraine:

"Meanwhile, in all this fuss, we have missed the positive news: the engine plant of the Turkish Bayraktars has been destroyed in Kharkiv. And the Akinci engine plant has not been destroyed only because Russia is trying to take over the entire plant. But if unsuccessful, of course, it will be destroyed. That does not mean the Turks will not find a replacement, of course they will, but it will be much more expensive, longer and more difficult. As the saying goes: "A small thing, but a pleasant thing".

In general, the Armenian nationalists are "pleased". This includes the fact that such bombings destroy houses and kill civilians.

The current pompous "Crimea Days in Armenia" shows once again that Armenia is an accomplice of Russian aggression against Ukraine, because the Armenian nationalists have their own plans regarding the Ukrainian Crimea and they are already starting to implement them.

It should be reminded that the so-called "deputy prime minister of Crimea", the permanent "representative of the republic to the Russian president", ethnic Armenian Georgy Muradov (Muradyan) is in fact the main person in the occupation administration of Crimea. It was he who became one of the main organizers of the mass delivery of Armenian "tourists" to the peninsula. It was with Muradov's prompting that the "Crimean Days in Armenia" were organised.

In particular, the occupation authorities are planning a legalized looting or so-called "nationalization" of Crimean residents' property. It will take place under the guise of "nationalizing" the property of "Ukrainian politicians and oligarchs" in Crimea.

With Muradov's participation, Crimean Tatars in Crimea are already being repressed for "extremism" and for allegedly "working for Ukraine". Moreover, it has long been known in Crimea that to receive accusations of "ties with the security services of Ukraine" and be subjected to reprisals, it is enough to have real estate in a place "liked" by the occupiers and representatives of the Armenian diaspora. As a result, people are often imprisoned, tortured and forced to "sign over" their real estate to extortionists for next to nothing.

Robbery and looting is now reaching a new level. The puppet so-called head of Crimea's State Council, Vladimir Konstantinov, has estimated the property of "Ukrainian politicians and oligarchs" in Crimea at billions of rubles and said that this property will be "nationalized". "The assets are serious, will run into billions of roubles," Konstantinov pointed out.

According to him, data is already being received by the Crimean authorities, and information about the first batch of property to be nationalised is being verified.

Therefore, we should not be surprised that there are immediate claimants for the looted property. They will in many ways be representatives of "the most ancient and long-suffering people" who dream of living on a warm sea coast.

They dream of living in Georgia's occupied Abkhazia or in the occupied Ukrainian Crimea.  Illegal "tourist trips" of looters from the Republic of Armenia to the occupied Crimea will most likely be organized in order to "look after" someone else's property.