Tbilisi and Tabriz as world cities on transit corridors 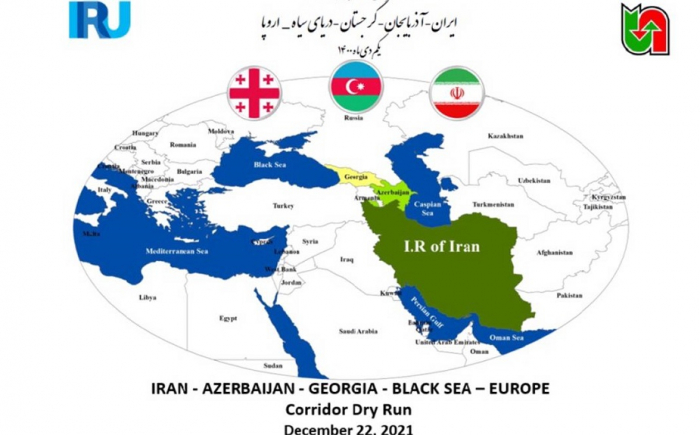 The ambassador of the Islamic Republic of Iran to Azerbaijan, Seyyed Abbas Musavi, said on his Twitter page that a new transport corridor between Iran, Azerbaijan, Georgia, the Black Sea and Europe will be organised in the very near future. Also according to the ambassador, the corridor system will include both a transit corridor between Pakistan, Iran and Turkey and the North-South corridor, which will link Finland, Russia, Georgia, Azerbaijan, Iran, with the countries of the Persian Gulf and India.

Earlier, Javad Hedayati, Director General of the International Transit and Transportation Authority of Iran (RMTP), announced that a trilateral agreement had been reached between Iran, Azerbaijan and Georgia on launching a transit route connecting the Persian Gulf with the Black Sea. Under the agreement, cargo will be shipped from Iran to Azerbaijan via the border at Astara and to Bulgaria or other Eastern European countries via Georgian ports on the Black Sea over the coming months.

The opening of the Persian Gulf-Black Sea route via Iran, Azerbaijan and Georgia is already on the agenda. As part of this route, 144 trucks from the three countries will start carrying cargo from Tabriz, the Iranian province of East Azerbaijan, from 22 December 2021.

Actually, you could say a historic event is taking place. For the first time in more than 220 years, Tbilisi and Tabriz, the main historical city of 'Greater Azerbaijan', are linked economically, and for the long term.

Tbilisi and Tabriz have historically been the two main economic and cultural centres of both the South Caucasus and the Middle East. It should be recalled that Tabriz had 'capital status' for centuries; during the heyday of Georgia in the 11th-13th centuries, it was the capital of the culturally, politically and economically closely linked Azerbaijani state of the Ildeghizids, which was adjacent to it. Tabriz was then the capital of the Hulagid state, the Azeri powers of Kara Koyunlu and Ak Koyunlu, and, until 1555, the Safavid Empire. All this time, for Tbilisi and for Georgia, Tabriz was the closest major and "capital" city in the world beyond its borders.

The Ottoman-Sefavid wars and the proximity of Tabriz to the western borders of their power forced the Safavids to move the capital first to Qazvin and then to Isfahan. However, the economic and cultural importance of Tabriz in the Safavid Empire was maintained. Once again, it was Tabriz that was the closest "partner city" to Tbilisi in this empire, which included Kartli and Kakheti as autonomies. The importance of Tabriz remained even after the fall of the Safavids under the Zends and Afshars.

It was only after the arrival of the Russian Empire in the Caucasus that Tabriz was 'cut off' from Georgia by a border line along the Arax River, which simultaneously 'split' historically united Azerbaijan into Northern and Southern Azerbaijan.  The role of Tabriz in the Kajarian state was dramatically decreased as under the Russian Empire Northern Azerbaijan was "isolated" from Southern Azerbaijan as much as possible and Tabriz lost its connection with the lands that had always been economically attracted to it - Nakhichevan, Irevan, Zangezur, Karabakh.

Later when in 20th century large oil fields were found in Iran, development of industry connected with oil extraction had been mainly in the south of Iran, in the region of Persian Gulf. Tabriz temporarily fell by the wayside here as well.

But oil is not the lifeblood of the economy. Given the enormous "human potential" of South Azerbaijan, part of the Islamic Republic of Iran, Tabriz has developed even despite unfavourable geopolitical factors. As a result, the city is now the second most important industrial centre in Iran (after the capital Tehran). The city has a network of specialized factories and plants of the Tabriz Mohsen Iranian Tractor Company, which is the heart of Iran's machine building industry, with branches operating in many cities of the country and abroad. The city also has an oil refinery, a chemical plant and a cement plant, as well as dozens of other important factories, research centres and universities.

Before the liberation of Karabakh, just 150 kilometres north-west of Tabriz began the vast 'desert' - devastated Azerbaijani territories occupied by Armenia. Isolated from the rest of Azerbaijan, Nakhichevan, as well as its connection with a destitute and aggressive Armenia via Meghri, did little or nothing for the development of Tabriz.

The situation is now changing radically. Liberated Azerbaijani territories are rapidly developing. Vital corridors, first and foremost the Zangezur corridor, are being unblocked. And new ways and opportunities are opening up for Tabriz from its former almost "dead-end" position.

Moreover, in today's globalising world, there is the notion of a 'world city' - i.e. a city that is not "embedded" within national and state borders and that is important not only as an administrative, industrial, cultural and scientific centre, but also as a city to which the geographically surrounding areas tend to gravitate. Notwithstanding the state borders, which will economically be 'erased'.

There is no place in such a system for a nationalist mono-ethnic state like the one recently "built" in the Republic of Armenia on the basis of the ideas of Nazi Nzhdeh. The ethnically "purely Armenian" Yerevan today (although historically it is an Azerbaijani city), despite the fact that it already concentrates more than half of the population of the emptying Armenia, cannot in any way be a "world city".

The world cities are Tbilisi, Baku, Istanbul... And the main megalopolis of South Azerbaijan - Tabriz will inevitably be added to them in the region. For the Islamic Republic of Iran, its importance will be no less than, for example, for Italy, (recall that it is Milan, not Rome, that is the economic capital of the state, providing, together with the surrounding areas of northern Italy, the bulk of its GDP). For Tbilisi, the resumption of economic relations with Tabriz and generally the inclusion of Iran in the transit corridors passing through Georgia will give a new impetus to development.