How did Aivazovsky's paintings, including the national treasure of Georgia, get to Yerevan? 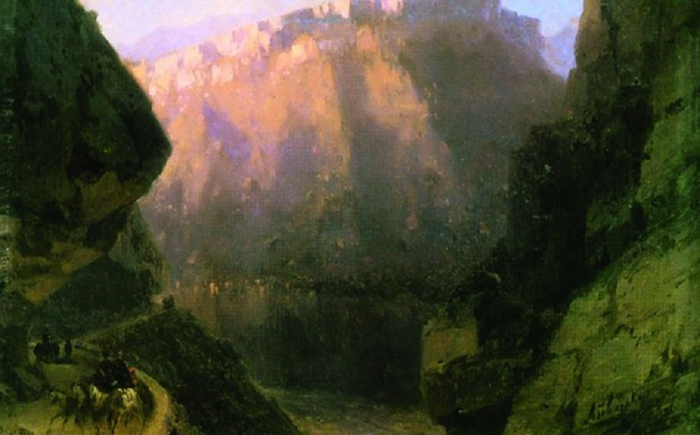 If the kidnapping and appropriation of someone else is a well-known "passion" of Armenian nationalists, then what can we say about the fact that it has to do with people of Armenian origin or the Armenian-Gregorian religion. All their works are by default considered "Armenian" and "belonging" to Armenia, which is actually nonsense. It would be like if Israel claimed the works of art of all the artists of the world who had Jewish roots, or Italy - all those who had Italian origin.

The same Ivan Aivazovsky was by the origin of their Armenian-Kypchaks who settled in Ukraine, which was already written by "Caucasus Plus" in the material "Türkic roots of the" Armenian "artist Aivazovsky" (http://kavkazplus.com/news.php?id=6710 ). And although he considered himself an Armenian, he lived most of his life in the Crimea, in Feodosia. In addition, Ivan Aivazovsky had a very good attitude towards the Ottoman Empire.

Ivan Aivazovsky left a great legacy and a significant number of his paintings are dedicated to Georgia. Aivazovsky's attitude to Georgia, in particular, was published by the Georgian edition "Kviris Palitra" (https://www.kvirispalitra.ge/istoriani/44414-saqarthvelo-uckhoeltha-ferebshi.html):

“Ivan Aivazovsky (1817-1900), a great Russian artist of Turkish-Armenian descent, became interested in Georgia at an early stage in his career. In 1855 he created the painting "Darial Gorge" (kept in the National Gallery of Armenia) .... Then, after a family drama, when Ivan Konstantinovich divorced his wife, the artist decided to go to the Caucasus "to hide his grief."

Mountains, glaciers, and pristine nature made a huge impression on the artist. Aivazovsky's travel album was filled with sketches ... Tbilisi charmed the artist so much that he decided to spend the winter in Georgia.

In 1862, he painted the Daryal Gorge for the second time, where a long caravan (kept in the Pavlovsk Museum-Reserve) can be seen on the moonlit road near the Terek.

Daryal remained in the work of Aivazovsky for a long time. In 1868 he dedicated two more paintings to the gorge: "The road from Mleti to Gudauri" (kept in the Dagestan Art Museum named after P. Gamzatov) and "Darial Valley in the moonlight" (kept in the National Gallery of Armenia).

Aivazovsky's visit to Tbilisi (Georgia) shocked and revived the society of the capital ... All Tbilisi knew that the great artist creates the best paintings in the Caucasus. His creations were rumored not only in the homes of educated and prominent people but in almost every street, market, or market. Everyone said that Aivazovsky wrote with magic speed. It really was like that. Ivan Konstantinovich created 12 wonderful paintings during the winter in Tbilisi ...

Georgia occupied a prominent place in the Caucasian cycle of Aivazovsky: “Tbilisi from Seid-Abad” (kept in the Art Museum of Georgia. 1868), “View of Tbilisi” (kept in the Stavropol Regional Museum. 1869) “Rioni River” (preserved in National Gallery of Armenia, 1870), "Daryala Cloud Gorge" (kept in the Moscow State Literary Museum. 1891), "Avalanche on the Georgian Military Highway near Kazbegi" (picture missing).

Soon they started talking in Tbilisi that Aivazovsky had finished painting Caucasian paintings and was preparing for their exhibition ... Many visitors came. Tbilisi residents were delighted with what they saw, and Ivan Aivazovsky donated a large amount of money from the exhibition to the capital's orphanage for the homeless. "

As you know during the life of Ivan Aivazovsky, it was Tbilisi (Tiflis) that was the cultural and administrative center of the entire Caucasus. Therefore, it is not surprising that in his travels to the Caucasus, Ivan Aivazovsky spent the longest time in Tbilisi and donated his canvases to the city. Some of them are still in the National Gallery of Georgia.

But as we see from the information published in the article in "Kviris palette", not all canvases dedicated to Georgia and written here are in our country. Some of them somehow ended up in Yerevan. However, how - about this, there is even material published not anywhere but in the publication "Sputnik Armenia", which talks about the attempt of the Yerevan Museum (now the National Gallery of Armenia) to appropriate the paintings of Aivazovsky belonging to the museum evacuated to the Caucasus during the Great Patriotic War the artist's hometown - Feodosia.

Here is an excerpt from the article "Aivazovsky's paintings in the" close embrace "of Yerevan museum workers - how the collection was returned" (https://ru.armeniasputnik.am/20200729/Kartiny-Ayvazovskogo-v-tesnykh-obyatiyakh-erevanskikh-muzeyschikov---kak- vozvraschali-kollektsiyu-23920600.html)

“Ivan (Hovhannes) Aivazovsky was the first Russian artist to organize personal exhibitions. His paintings are worth a lot of money to this day. They imitated him, they earned money on his work. At what cost did we manage to preserve the heritage of the Armenian artist - in the material.

July 29 marks 203 years since the birth of Ivan Konstantinovich Aivazovsky and 140 years of the Feodosia Art Gallery (the article was written in 2020).

RIA Novosti Krym correspondent Galina Oleneva spoke with its director Tatyana Gaiduk about how the gallery lives under restrictive measures, about its past, present and future.

The construction of the Aivazovsky house, which in the future became the Feodosia Picture Gallery, was completed in 1847. 33 years later, Aivazovsky added to it a large hall 4 meters high, with an area of ​​260 squares, and on July 29, 1880, on his 63rd birthday, he opened the first public-private gallery in Russia. "

Aivazovsky did so that his house became the center of culture and education.

"He worked a lot, was the first Russian artist who began to make personal exhibitions. He painted his paintings in the studio, from where they went down to the gallery, and every day the exposition increased. Until the collection left somewhere for the exhibition. And again works began to accumulate in the hall, and it was great, because the audience was expecting completely new impressions, and the opportunity to communicate with the artist added additional charm to the gallery, "continues the gallery director.

Most of the visitors were in summer and autumn when passenger steamers entered the port of Feodosia. Entrance fees and flat fees did not exist. Instead, a mug was attached to the door, where visitors could drop money - as much as they wanted. "By the will of the artist, these funds were transferred to the Feodosia Charitable Society and distributed among the poor townspeople," says Tatyana Viktorovna.

Aivazovsky died in 1900. Then the gallery contained several sculptures and 49 of his works. The fiftieth, which remained unfinished, was donated by the artist's widow. This is what the seascape painter bequeathed to the city: "My sincere desire that the building of my art gallery with all the paintings, statues and other works of art in it would be the full property of the city of Feodosia, and in memory of me, Aivazovsky, I will bequeath the gallery to the city of Feodosia, my dear city ​​".

The rest of the property was inherited by Anna Nikitichna, the wife of Ivan Konstantinovich. Until the outbreak of the First World War, the gallery existed in this form. In October 1914, when enemy ships could shell the city, she was briefly evacuated to Simferopol. In March 1918, with the establishment of Soviet power in Crimea, the paintings returned to Feodosia in a special car ...

In 1922, a network of state museums of the country was created, which included the gallery. Nikolay Stepanovich Barsamov becomes its director. It was he who collected the world's largest collection of marine painter's works….

At the age of 30, Nikolai Stepanovich opened an art studio here. And in 1941, young students will help him to evacuate the collection: on the last September day, the paintings were taken to Novorossiysk by the motor ship "Kalinin".

"The city (Novorossiysk - ed.) Was bombed. I had to move on. Barsamov spent his days in the corridors of power in search of suitable transport but did not find understanding. The evacuation is in full swing, no one cares about the pictures. In the evening, completely wilted, he returned there, Then his wife Sofya Aleksandrovna left the house and went to the railway station. She went straight along the rail and, by chance meeting a person, began to persuade him to help take out the paintings. his railwayman and made an appointment to meet again. Later it turned out that the accidental counter - the head of the station, and his bedridden daughter is a big fan of Aivazovsky's work. went to Krasnodar ", - says Tatyana Viktorovna and calls it a real miracle.

Then there was Yerevan, where the collection was located during the entire period of the occupation of Feodosia. And when the city was liberated, Nikolai Stepanovich began a correspondence with Moscow in order to return the paintings back.

"Well, the Yerevan museum has also begun a correspondence. This is a difficult moment. Of course, we are immensely grateful to the museum for its help, but it took some effort to get the collection out of the close embraces of the Yerevan museum workers. By a special resolution of the Council of Ministers, the gallery was returned," concludes Tatiana Viktorovna. "

Thus, we see that only the intervention of the union center prevented the Yerevan museum from appropriating a huge and priceless collection of works by Ivan Aivazovsky, which he bequeathed to his native city. But when the National Museum of Georgia organized an exhibition of its canvases in Yerevan, there was information that one of the paintings - it was Aivazovsky's canvas - was not given back to Tbilisi by the “brothers-Armenians” and now this painting, a national treasure of Georgia, is still in Yerevan. It is also not completely clear how many other paintings handed to Georgia ended up in Yerevan, which, according to many sources, were originally located in Tbilisi (Tiflis) during the artist's life.

In principle, it is necessary to investigate the very origin of the collection of the Yerevan Museum and find out how many works of art (not only paintings by Aivazovsky), which in fact were originally a national treasure of Georgia, were illegally exported to the territory of the Armenian SSR and the Republic of Armenia.