Armenians in the Ottoman Empire: What Did They Still Lack? 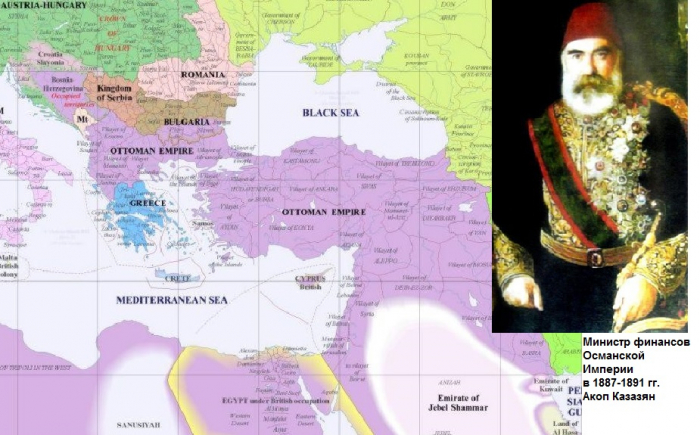 The stereotype imposed by the Armenian nationalist propaganda and those circles in the West that artificially incite hostility between peoples who have peacefully coexisted for centuries - at present the phrase “Armenians of the Ottoman Empire” is linked with the mythical “genocide”.

As if the Armenians did not live peacefully in the Ottoman Empire, did not prosper, did not disintegrate, did not build churches and schools, did not populate cities and entire provinces of the empire? As if the Armenian population of the Ottoman Empire did not increase at an outstripping pace, to the extent that they became economically and demographically dominant where they were an insignificant minority 200-300 years ago.

On the next anniversary of the so-called. of the mythical "genocide" of the Armenians, many remembered the words of the Patriarch of Moscow and All Russia Kirill, said by him about the position of Christians (particularly Armenians) in the Ottoman Empire. Here is an excerpt from an interview where the head of the Russian Orthodox Church tells the historical truth:

Patriarch Kirill did not detail and describe the colossal privileges and opportunities that the Armenians had in the Ottoman Empire. But they also need to be remembered.

To begin with, in general, Armenian churches and Armenian settlements in Constantinople appeared only after they became the capital of the Ottoman Empire. Under the previous owners of the city - the Romei (Byzantine) emperors, the Armenians were discriminated against on religious grounds and they were simply not allowed to settle in the capital of the empire and build their churches.

The statements of Armenian historians-falsifiers that, they say, almost “two dozen Byzantine emperors were Armenians” do not correspond to historical reality. These people could come from the provinces that were called "Armenia" or serve in them, but ethnically they were not Khays, let alone Armenian Gregorians. Only a person professing Orthodoxy could become the head of state in the Rome (Byzantine) Empire. The Monophysite Armenian-Gregorian faith was considered heresy and persecuted.

Only the Ottoman Empire, unique in its religious tolerance, gave the Armenians all rights and opportunities. Moreover, the sultans of the Armenians were initially "elevated" above most other Christian denominations. This was facilitated by the millet system - internally self-governing religious communities. And if the Orthodox were part of a separate millet (community), the head of which was the Orthodox Patriarch of Constantinople, then the Armenian Patriarch of Constantinople, in addition to his “Armenian” millet, “supervised” other Christians of the Monophysical faith (Copts, Syro-Jacobites) living in the Empire, as well as Catholics, Uniates (Melkites, Maronites), Nestorians, Protestants, etc. Thus, all the same, Europeans living in the Ottoman Empire were "accountable" first to the Armenian Patriarch of Constantinople and the Sultan.

The "golden age" of the Armenian community in the Ottoman Empire began after 1821, when the Greeks of the south of the Balkan Peninsula, instigated by the European powers and led by "hetarian" masons, raised a separatist rebellion known as the so-called. "War for the independence of Greece". The revolt was accompanied by monstrous atrocities and the massive expulsion of the Muslim population from the territories of the separatists that came under the control (in fact, this was the first real genocide in Europe). And at the same time, the Ottoman government did not "take revenge" and persecute the Greeks either in Constantinople or in other parts of the empire. Although, of course, the former trust in people of Greek origin is gone.

The preferences when appointing to positions in state structures, in particular in the foreign policy department (the so-called drahomanov) "assigned" to Christians, began to be given to the Armenians. Armenian entrepreneurs and financiers also began to be patronized in the economic sphere. As a result, by the beginning of the 20th century, approximately 80% of the economy and finances of the Ottoman Empire were controlled by the Armenians.

Historical speculations about the alleged "Armenians as Christians were impaired in their rights" are groundless. The fact is that since 1839, within the framework of the "Tanzimat" reform policy, all subjects of the Ottoman Empire were legally equal in rights, regardless of religion. Which led to real "privileges" of the same Armenians over Muslims. After all, the latter did not even have such opportunities as the rich and “welded” internal mutual assistance of the Armenian community, in whose hands all trade was.

As a result, the Armenians bought out the best lands, settled all large territories "crowding out" the Muslim population - Turks, Kurds, Laz. Just like the Armenian community oppressed Georgians and Azerbaijanis in the Caucasus, populating their best lands. And although the Russian Empire was formally Orthodox, just as the Ottoman Empire was Muslim, Orthodox Georgians, like the Muslim Turks, could not oppose anything to the "pressure" of the Armenian capital.

And another very important point - throughout the 19th century, accepting millions of Muslim refugees both from the Caucasus (muhajirs, including from the Georgian Javakheti, Abkhazia, Adjara), as well as the Balkan Peninsula, the Ottoman government tried not to populate those lands where Armenians lived in order not to "restrict" them. As a result, the same Circassians were settled in Palestine, Syria, Jordan, in desert areas, although, of course, for these people, lands "closer" to the Caucasus would be more suitable. But the Armenians have already settled there en masse - and the Ottoman government, patronizing the latter, in principle, did not settle the same Circassians there.

The demographic dynamics of the Armenian population in the Ottoman Empire is a topic for a separate study. Nowadays, few people remember that until the beginning of the 20th century, the natural growth of the Christian population of the Ottoman Empire was higher than that of Muslims, and the proportion of Christians was constantly growing. So they already had enough land.

As a result, from overpopulated Bulgaria, Christian Bulgarians began to settle in Asia Minor, creating Bulgarian villages here. There was also a mass settlement of new localities by Armenians since the level of well-being of the Armenian population was higher, infant mortality was lower, and the birth rate was very high. In addition, the Armenian bourgeoisie and the Armenian Church, if necessary, helped the Armenian communities to buy lands "they liked" and to establish more and more Armenian settlements. They, for example, arose in the West of Asia Minor, where historically the Armenians never lived, and on the Black Sea coast, in the already land-poor Lazistan, where Armenian settlers “pressed” the Georgian Laz.

Those. if the Ottoman Empire had not collapsed and demographic tendencies persisted (and they inevitably survived, if the Christian peoples, the same Armenians had not hit the "Europeanization" and nationalism), then Christians would have made up the majority of the population in it. And in the conditions of universal suffrage, this meant that the government of the Empire could be headed by Christians, the same Armenians. They have already reached very high positions.

In particular, the third-ranked person in the Ottoman Empire (after the actual sultan and the grand vizier) in 1887-1891 was an ethnic Armenian - Hakob Kazazyan, who was the favorite of Sultan Abdul-Hamid II. He was awarded the title of Pasha. After the death of Hakob Kazazyan in 1891, by order of the Sultan, a state funeral was arranged for Hakob Kazazyan.

One can only imagine how the Armenian community of the Ottoman Empire would flourish and the unity of the state would be preserved. After all, it is obvious that with 80% of the Empire's economy under control, Armenian entrepreneurs would eventually completely control the oil fields of the Ottoman Empire in Iraq, the coast of the Persian Gulf, Arabia, Libya. The current sheikhs of the Gulf would seem "beggars" in comparison to the Armenian oil tycoons. The Armenians would have lived and prospered near Agrydag (Ararat) and in Cilicia, and on the shores of the Black Sea, and wherever they wanted on the territory of the Ottoman Empire, as today they live quietly in Constantinople.

The question is - what else did the Armenian nationalists lack? What else did they want? Why was it necessary to destroy the Empire, which would provide all the opportunities for the life, development, and prosperity of the Armenian people? Why was it necessary to arrange terror against other peoples and allow their people to be used as a "consumable" in the dirty aggressive combinations of other powers, which, by and large, never gave a damn about the fate of the Armenian people?