Abkhazians are being thrown out of their homes? 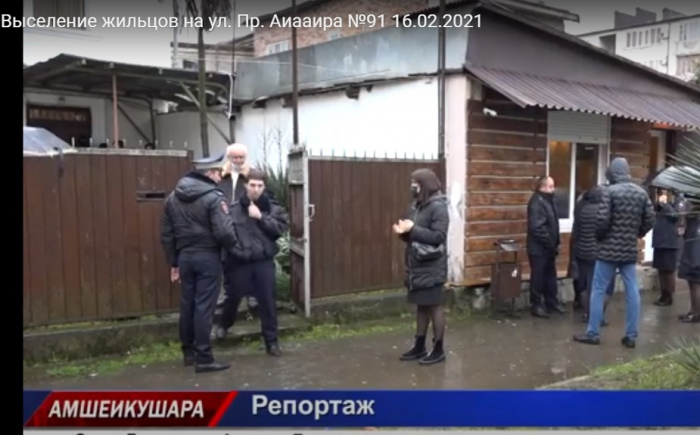 Separatist Abkhazia in recent days has made a big splash on the plot of one of the main separatist TV channel - the so-called. Of the "Abkhaz State TV and Radio Company", which shows the eviction of an ethnic Abkhaz family with a family from the house legally belonging to a Greek woman who lived before the war:

This video story gave a certain hope to many Georgian refugees from Abkhazia, whose housing was taken away by separatists and Baghramyan's militants. Some began to hope that there is a chance that justice will still prevail even under the separatist regime, and gradually, in the same Sukhumi, they begin to return housing to their rightful owners.

Alas, the situation is actually for the Georgians and, what is most interesting, for the Abkhazians, it is developing in the saddest way.

First of all, the question arises: why is the plot about how the house is taken away from the Abkhaz and returned to the Greeks is shown today?

The fact is that right now in Abkhazia there is just an influx of immigrants from Armenia. He is still constrained by the lack of the possibility of moving from Armenia to Abkhazia by land. However, sooner or later the borders will open, and tens, if not hundreds of thousands of Armenians will "rush" to the warm Black Sea coast. Moreover, both those who do not want to live in the liberated from the occupation of Azerbaijani Karabakh, and the residents of the Republic of Armenia proper.

Prices in the same Russian Krasnodar Territory have become sky-high. And even there the Armenians own everything that is possible. Separatist Abkhazia with its impoverished population is a different matter. And the mass of "trophy property" seized from the exiled Georgians.

At the same time, the "trophy" real estate that the Armenians have seized is clearly not enough to satisfy the demand of all their fellow tribesmen who want to live in Abkhazia. We will have to solve the issue of "living space for the long-suffering people" at the expense of the remaining indigenous population.

The very fact that the separatist authorities allowed to shoot such a plot (Abkhazians are evicted not even from the trophy, but from the "partially purchased" real estate by them) and to show on their main TV channel and the fact that today it is spreading through social networks a sign that already in In the near future, evictions of Abkhazians from houses and apartments will become commonplace. Moreover, from the "trophy" houses they will generally be thrown out without ceremony. But this will not be done in favor of the Georgian refugees.

The fact that in the separatist territory there would be significant changes in housing with real estate and the rights of residents could have been guessed after the propaganda began that it was necessary to urgently allow "to sell real estate" to non-citizens of Abkhazia ". It is clear which nationality is mainly Armenian. Therefore, a "large redistribution of real estate" is clearly being prepared in Abkhazia, and, of course, not in favor of the Georgians, who, without the elimination of the separatist entity, have nothing to count on returning to their homes.

Those who intend to completely populate Abkhazia with "Artsakh" migrants right now needed to create a precedent for the selection of real estate from the Abkhaz. Something that seemed unthinkable until recently.

None of the Abkhaz separatists even imagined that one fine day the executive service might come and throw the ethnic Abkhaz with all their belongings out into the street. Moreover, even from home for which, albeit not completely, but paid money (25 thousand euros - a huge amount by the standards of impoverished Abkhazia). It seemed inconceivable.

To the unfortunate intoxicated Abkhazian separatists who thought that if they drove their Georgian brothers out of their houses and apartments, then the same would not affect them, it's time to think better. Having seduced them into separatism, the Armenian nationalists did not think at all about the "Abkhaz ethnic state". They organized a fratricidal war in order to finally get their hands on Abkhazia, "clearing" it of the indigenous inhabitants.

First, during the separatist war of 1992-1993, Georgians were expelled from Abkhazia. Then the Armenian lobby took control of the economy of the separatist territory. And now, judging by the tendencies, the fate of the Georgians who have lost their apartments and houses will be divided by their deceived brothers - the Abkhaz.

The time for the Abkhaz to reap all the consequences of the Armenian "separatist intrigue" has come. It is clear that, first of all, they will be taken away from the captured Georgians' trophy housing. Then the Abkhazians will begin to take away their own homes, throwing families with children and old people out into the street. Scammers and criminals know thousands of ways how to make claims on someone else's property and how to take it formally "legally". Moreover, on the basis of separatist "laws", which they will obviously change for themselves. And no authorities, no separatist authorities will help. The separatist executive service, apparently, is already in the hands of the "ancient cultured people."

It is symbolic that in the above video it is said that an Abkhaz was evicted from a house in Sukhumi and the house was returned to a Greek woman. Not a word is said about the Armenians. The separatist authorities have not yet begun to “shine” the main initiators of the future mass eviction of Abkhazians from their homes, Armenian nationalists. But to guess that everything is being done in their interests is very easy.

The Abkhazians need to prepare for the fact that they will share the fate of the Georgian brothers, whom separatists and then “friendly” Armenian militants deprived of their homes in 1993. And there are no ways to prevent such a sad outcome for the Abkhaz people - except for reconciliation with the Georgian people and return to the united state of Georgia. Otherwise, Abkhazians can very quickly become disenfranchised exiles on their land.