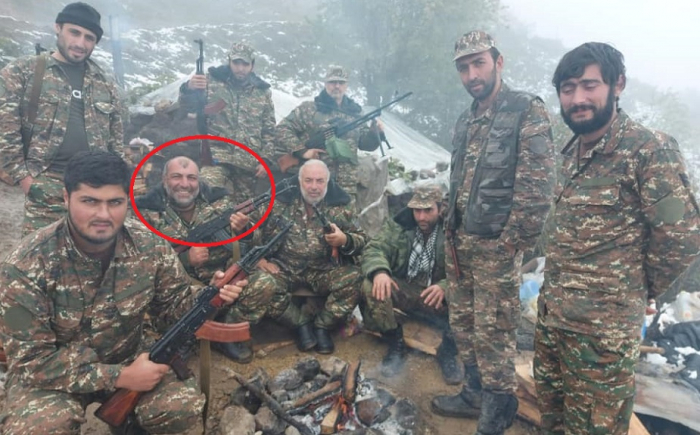 On October 25, 2020, the number of potential Armenian separatist fighters who were going to fight against Georgia to separate the Samtskhe-Javkheti region from it decreased by about three dozen. Thanks to the successful actions of the Azerbaijani army, the separatist and extremist, the head of the Armenian "Javakhk" separatists of Georgia Vahagn Chakhalyan, was destroyed in liberating the occupied lands in Karabakh. The one who, until recently, on social networks, boastfully promised to return to Georgia and fight against the Georgian state.

According to information received on the evening of October 25, as a result of the operation of the Azerbaijani army, the leader of the "Javakhk" separatists, Vaang Chakhalyan, was liquidated along with 27 more "Javakh" militants - Armenians who had Georgian citizenship (possibly dual citizenship) and who were in a car transporting them to the Khojavend region (Martuni).

It should be reminded that Vahagn Chakhalyan, as the head of the separatist organization, united the extremist Armenians of Javakheti into a single organization "Virk", the purpose of which was to tear Samtskhe-Javakheti away from Georgia and join it with Armenia.

On the territory of Georgia, Vahagn Chakhalyan was prosecuted for terrorism and calling for the collapse of the state, was convicted, served a sentence, but in 2012 was released ahead of schedule as part of a broad amnesty campaign and returned to separatist activities.

With the outbreak of hostilities in Karabakh, both on the territory of Georgia in Samtskhe-Javakheti and in Armenia, militant units began to form from the “Javakhk” Armenians. Vahagn Chakhalyan headed a group of more than 50 people "Javakhk" Armenians - citizens of Georgia. Most of these militants illegally crossed the border from Georgia to Armenia to participate in the Karabakh war.

Chakhalyan did not even hide the fact that they were thus preparing for their main war - against Georgia. It was in this capacity that the Pashinyan regime trained these militants. This is despite the fact that, being originally a "pro-Russian" separatist, Chakhalyan, being in Armenia with his "public initiative" Volya ", criticized the Pashinyan government.

However, the plans of aggression against Georgia "reconciled" Pashinyan and Chakhalyan. Moreover, in the first weeks of the Karabakh war, Chakhalyan and his militants were “protected” and not thrown into dangerous directions. Although Vahagn Chakhalyan and his "Javakhksie" militants joined the elite unit of Armenian terrorists "Black Panther" (or "Black Leopard"), which was commanded by former member of the Armenian parliament Rustam Gasparyan (fatally wounded in mid-October).

Armenian Prime Minister Nikol Pashinyan himself published a photo of a gathering of separatists in Akhalkalaki with the inscription “Javakhk” as if making it clear where the next war of Armenian nationalists will be. Moreover, to all appearances, regardless of how the war in Karabakh ends, it has already been decided to make Javakhk the next direction of Armenian aggression. It becomes obvious that in the foreseeable future not only "Javakhk" militants will be used against Georgia, but also the "Black Panther" unit, one of the best sabotage units of the Armenian occupation army in Karabakh.

The further, the more critical the position of the Armenian army and separatists in Karabakh became. Liberating their native land from the separatists, the Azerbaijani army smashes the elite units of the Armenian troops. Whole elite battalions are being destroyed, the front is “exposed”, in order to “plug the holes” the Armenian occupants no longer have enough reserves. There are also losses among the people of Samtskhe-Javakheti fighting in the Armenian army.

The fact of Chakhalyan's death still needs to be verified. It cannot be ruled out that such “valuable extremists” can be specifically declared “dead” by the Armenian special services, in order to be thrown into Georgia under other names.

But the fact that the Azerbaijani army is utilizing the "Javakhk" militants, making it easier for Georgia to fight Armenian "Javakhk" separatism and terrorism is an indisputable fact. After all, Chakhalyan and the separatist fighters killed along with him were going to use the "acquired combat experience" against Georgia.