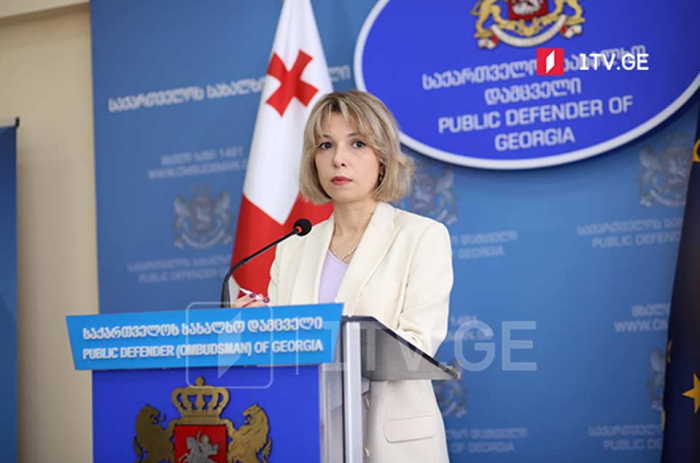 Georgian Public Defender Nino Lomjaria sent an official letter to the President of the European Council, Charles Michel, requesting the President and the Heads of the EU Member States to consider the aspirations of the Georgian people towards the European family, their fight and efforts in this process, and to grant Georgia a candidate status, in order to prevent Georgia’s separation from the common space it shared with Ukraine and Moldova and miss this important opportunity.

“Your Excellency, I hereby extend the assurances of my highest consideration personally to you, as well as the President of the European Commission, and the Heads of State/Government of the 27 EU Member States. The EU has always been a firm supporter of Georgia in its European aspirations and the results of this support have been felt by many of us for decades. Let me express our utmost gratitude for this assistance. I remain convinced that the EU-Georgian cooperation will keep strengthening, while the progress that comes with the European integration will benefit the citizens of both the EU and Georgia who share the common values and are united in forging more humane, peaceful, and prosperous future.

I am addressing you today as the Public Defender (Ombudsman) of Georgia, which is an independent constitutional body that supervises the protection of human rights and freedoms by public authorities in Georgia. The Ombudsman has over the decades been acting resolutely within its constitutional mandate and enjoys a wide support and trust from the members of the public as well as the international community at large.

During such critical times I feel obliged to address you ahead of the upcoming European Council meeting on 23 and 24 June 2022, which is expected to make a final decision about the membership applications from Ukraine, the Republic of Moldova and Georgia. As you are aware, on 17th of June 2022, the European Commission issued Opinions on Georgia’s, the Republic of Moldova’s and Ukraine’s application for the EU membership in which the Commission recommended granting European Perspective to all three states.

Furthermore, while for Ukraine and the Republic of Moldova the Commission recommended granting a candidate status, with respect to Georgia the Commission has put forward a clear set of conditions to be met before the candidate status is granted. This risks separation of Georgia from the rest of the Associated Trio, even though it has been seen for many years as a frontrunner among the three and shares with them the threats coming from the Russian Federation.

This is an existential matter and moment for the whole nation, who have already made their conscious choice of European and Euro-Atlantic integration, embodied in the Constitution of Georgia. In Georgia the European integration is not only a foreign policy option, but a moral and cultural choice shared by a wider political spectrum and supported by the absolute majority of Georgians. Unprecedented number of demonstrators marching in Tbilisi on the 20th of June is a recent confirmation of this. The civil society led rally was held for the sole purpose of expressing unwavering support for Georgia’s EU integration, regardless of the political affiliation. Europe is a historic choice and aspiration of the Georgian people, for which all generations have made sacrifices.

The idea of European perspective consolidates society and reduces polarization. Consequently, in the face of the most acute domestic and foreign policy challenges, it is crucial for us now that Georgia, together with Ukraine and the Republic of Moldova, is granted the EU candidate status with the precise conditions to be met within strict timelines.

The European Commission has already outlined the most challenging issues to be addressed immediately by Georgia and let me confirm that the issues set out in the Opinion have been voiced by the civil society and majority of Georgians, as well as the Ombudsman for many years already.

It is for the reasons outlined above that I appeal to you today to consider granting the EU candidate status to Georgia. I firmly believe that the European integration is the only driving force for a progress in Georgia and the recommendations of the European Commission will act as a road map in this process. Let me assure you that the Public Defender will oversee this process and the Georgian people, civil society, and the media will be there to safeguard the fulfillment of these conditions,” reads the letter.