"...We are natives of this wonderful country..." - Ruben Tutulyan, 'host' of Abkhazia, hands out gifts 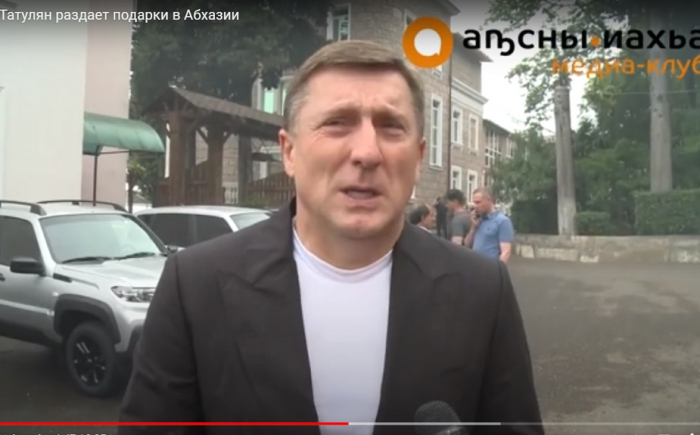 What do you call a "president of an independent state" who, as a "wedding general", participates in a show of "gift-giving" by a criminal mastermind? This is not just a puppet, it is an "errand boy" in the hands of a gangster.

It was this very capacity in which the separatist "president of Abkhazia" Aslan Bzhania was present in pompous "distribution of gifts" by criminal mastermind Ruben Tatulyan.

An eloquent video of the distribution of gifts by Ruben Tatulyan, whom the separatist media and social networks call "patron of the arts, president of the Sochi Wrestling Federation, friend of Abkhazia" was circulated online:

"We are natives of this wonderful country", says Ruben Tatulyan smugly in the video. He doesn't say "we are the hosts" yet! But he is already "natives"! That is, Armenians are already "natives" in Abkhazia!

The separatist media enthusiastically reported that "Aslan Bzhania attended the ceremony of handing over of cars to the Armenian community of Abkhazia. Ashot Minosyan, deputy speaker of the so-called "parliament of Abkhazia", Galust Trapizonian and Levon Galustyan also took part in the ceremony.

Among these "Armenian recipients of gifts" Ruben Tatulyan presented one car to the self-proclaimed "head of the Abkhazian Orthodox Church" Father Vissarion (Apliaa). No one really explained what relation of the Orthodox priest to the Armenian community of Abkhazia has, but towards criminality Father Vissarion (Apliysan). Vissarion (opportunist, who changed his name from Pilya to Apliaa and became "an ardent Abkhazian nationalist" although he is Georgian by birth) is very much related to it. Since before his ordination as a priest Vissarion Apliaa was in prison, was involved in criminal activities and was friends with notorious criminal boss "Iaponchik" (he even came to give his friend a funeral).

It is clear that Tatulian did not give gifts to "random people". Gifts were given to his fellow tribesmen, Armenians and one person close to Tatulian by "common criminal past".

The question is: What were Bzhania and other Abkhazians doing at this "Armenian-criminal celebration of life"? Probably they hoped that next time they will receive new handouts from their "master" Tatulian. All the more that it was announced that within two weeks Ruben Tatulian would give them six similar cars and three school buses. For sure, Tatulian "feeds" the separatist puppets "unofficially" as well.

However, as we know, Aslan Bzhania was appointed "president" thanks to Ruben Tatulyan to whom he made a "bow" in Sochi before the elections, and thanks to whom the Armenian community of Abkhazia was instructed to vote for a new "puppet" (old Raul Khajimba was no longer happy with the Armenian "masters"). And today, with all their might the "president" and "independent Abkhazian politicians" are trying their best to look after the criminal authority and are participating in the "show of unprecedented generosity" of the "master" of Abkhazia.

And what about Abkhazians? And they have to envy and show "admiration" to the Armenian community. Here, for example, an Abkhazian, Pshiunoqua Vladimir distinguished himself by publishing the following post on Facebook:

"Well done Armenian Diaspora! That's the way to work, not crying on each other's shoulders, as do all those involved in the process of returning the descendants of the Muhajirs to their historic homeland. Pedestals don't stay empty for long, it means our people deserve such an attitude.

The Armenian Diaspora is showing the world how to respect and support each other."

It is not clear what only Pshiunoqua Vladimir is hoping for? That the Armenians rapidly settling in Abkhazia will return Abkhazian Muhajirs? Not at all! At the pace at which the Armenian community is grabbing control of Abkhazia, soon even Abkhazians living there will become superfluous. And not even admiration of some naive Abkhazians with "cohesive" Armenian diaspora will help. It is no accident that another Abkhazian Rimma Kvitsinia wrote a comment under the post of Pshiunoqua Vladimir: "That's how cleverly Abkhazia will be appropriated.

The conclusion is the same for Abkhazians - to show solidarity and mutual support. But not with appropriating alien lands by Armenian settlers, but with fraternal Georgian people, reconciliation with which becomes a question of further existence for the Abkhazian ethnos.