Prevent Georgia from becoming a " source" for Armenian revanchism 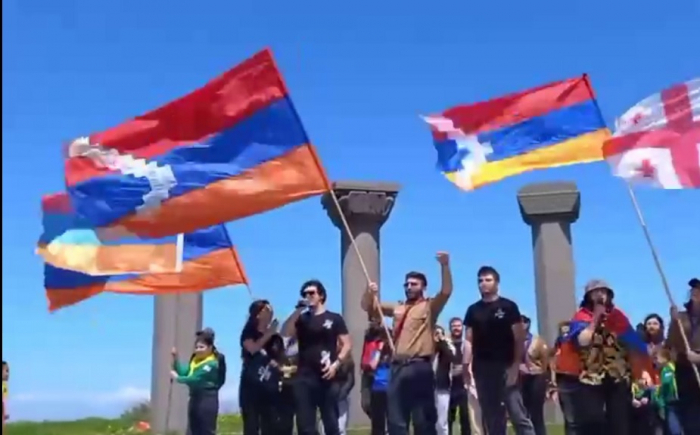 Recent events show that Armenian nationalists and "Javakhk" separatists are behaving with increasing confidence in their strength and capabilities in Georgia. Moreover, Georgia is becoming a "testing ground" for Armenian delusional revanchist ideas of creating a "great Armenia" on Georgian, Azerbaijani and Turkish lands.

The provocative action of Armenian extremists at the Didgori Field, to which Kavkazplus responded in its article "Symbol of Armenian claims to Georgian lands - the flag of separatist 'Artsakh' at the Didgori Field" has clearly demonstrated this (http://kavkazplus.com/news.php?id=36562). The Armenian nationalists themselves confirmed in their posts on the separatist telegram channel Javakhk that they had chosen the place for the action symbolically and that the separatist flag of the so-called "Artsakh" was not hung up accidentally:

"...The Armenian community of Georgia near the memorial to David the Builder's victory over the Seljuks in Didgor Fields organised a concert to commemorate the May victories and the declaration of independence by Armenia and Georgia in 1918. ( https://t.me/jvkhk1/971)

Symbolic place of celebration (https://t.me/jvkhk1/967): in the Didgori valley David the Builder defeated the Seljuk army of Turks led by the Turkish commander-in-chief Ilghazi. It has been 900 years, but it is difficult to imagine an event as significant for Georgia as the Battle of Didgori. Thanks to this event Georgia gained independence and sovereignty and got rid of an existential threat in the form of physical annihilation of the Georgian people. In 2020, it was decided to make August 12 a public holiday (Day of Victory in the Battle of Didgori), but the bill failed to enter into force due to criticism from the Turkish side: "The Turkish Embassy asked amicably not to pass the bill in its current form," because it would affect the partnership relations of friendly countries. In 2021 - Covid. Azerbaijani propagandists write that holding the event in such a place is an elaborate provocation. Armenians are stirring up anti-Turkish sentiment, as David the builder was drinking tea with the Turks. This battle is a symbol of freedom from the Turks. We hope that this year's celebration will take place after all...".

The Georgian publication Kavkazplus has already been classed as "Azerbaijani propagandists" by the "Javakhk" separatists. It also turns out that the Armenian nationalists were celebrating at Didgori Field not at all on Independence Day of Georgia (which after the declaration of independence in 1918 immediately had to defend it in the fight against Armenian aggression in the Armenian-Georgian war). They were celebrating "May victories".

And what kind of victories were these, given that the flag of the separatist "Artsakh" was flying over the place of celebration? Of course, they were commemorating the seizure of Azerbaijani town of Shusha by Armenian rebels and separatists in May, 1992. They may as well have brazenly celebrated the day of Georgian Sukhumi capture by Armenian separatists and militants in Didgori field in September 1993 with massacres of civilians. All the more that both in May 1992 in Shusha and September 1993 in Sukhumi genocide and ethnic cleansing of indigenous - Azerbaijani and Georgian population was carried out by the same Armenian fighters, who fought in Abkhazia in the infamous Baghramyan battalion. Baghramyan battalion.

And after that, the executioners of the Georgian population of Abkhazia still have the nerve to tell Georgia whom to be friends with and whom to be enemies with!

It is very dangerous that ardent Armenian extremists and revanchists feel so free in Georgia. The unscrupulous separatists and revanchists of the "Karabakh clan" in the territory of Azerbaijani Karabakh, waving their "Artsakh" rags under the protection of Russian peacekeepers, do not have much time left. In just over three years, the Russian peacekeepers will leave Karabakh, and the Azerbaijani law enforcement agencies will deal with the separatists and war criminals who did not have time to escape.

The current authorities in Yerevan and in the Republic of Armenia in general are not very happy about the revanchists either. Firstly, they need peace with Turkey and Azerbaijan, and secondly, the revanchists' attempts to carry out a coup by force, with the help of Russian agents, frankly frighten them.

So, Armenian extremist scum that hate Georgia and dream to dismember and destroy the Georgian statehood, move to Georgian territory, "taking advantage" of the Georgian history. And taking advantage of the fact that the Georgian authorities, unfortunately, do not pay due attention to the threats to the security of the country from the "Javakheti" separatists and the Armenian nationalist "fifth column", they organize their provocative actions, such as the "celebration" with separatist rags organized by the extremist organization "Armenian Community of Georgia" in late May in Didgori Field.