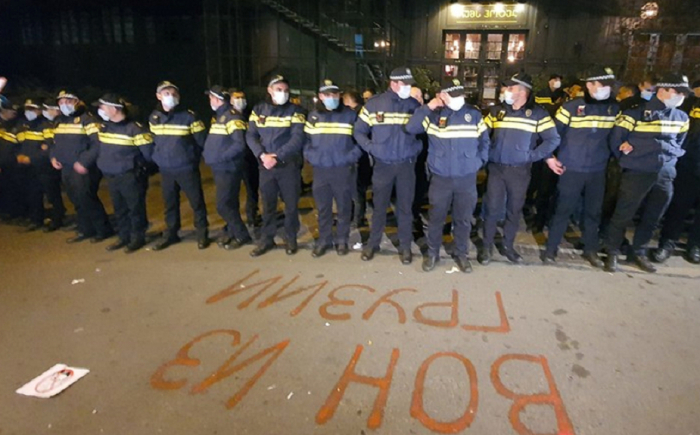 A scandalous incident occurred with the famous Russian journalist Vladimir Pozner in Tbilisi, who turned 87 on April 1. He decided to celebrate this event in Georgia, where he had previously celebrated his birthdays more than once. But Posner was greeted with a spontaneous protest action of Georgian citizens, who recalled his Georgian-phobic statements, in particular, on the issues of Abkhazia and the Tskhinvali region. As a result, Vladimir Pozner and his friends hurriedly left Tbilisi on a charter flight.

When analyzed in detail, the incident resembles a well-choreographed provocation. The purpose of the provocation is to strike at the image of Georgia. First of all, for its tourist image. At the same time, one can clearly see the goal of ensuring a new growth of anti-Georgian sentiments in the Russian Federation, which have already fallen into decline, which has been inflamed by the Armenian lobby for years, as well as to ensure in Russia support for separatist projects, primarily the Abkhaz and Tskhinvali projects. Moreover, many began to doubt the need to support the separatists in Russia.

The provocateurs very subtly calculated how to cynically “press” on a topic that is very painful for any Georgian - separatism and the occupation of Abkhazia and the Tskhinvali region and the expulsion of over 300 Georgian refugees from their homes. On social networks, the citizens of Georgia were "reminded" of Posner's most odious statements on that topic. For example, here are Posner's words about his support for the occupation of Georgian territories:

“Any person who looks beyond his nose should have understood that after Kosovo, Russia will inevitably recognize the independence of Abkhazia and South Ossetia by 98%. Moreover, then-President Putin spoke about this quite clearly. He said that this decision on Kosovo would inevitably lead to the fact that similar countries wishing to secede from certain countries, like Kosovo, which is still Serbian territory, was such territory for centuries, but where an Albanian majority was formed. From our point of view, not from mine, but from the point of view of the Russian point of view, it is no different from Abkhazia, where the local population lives, who did not come from Albania or from somewhere, and who do not want to continue to be part of Georgia. And it was clear that if Georgia does not change its policy towards same Abkhazia and South Ossetia, does not find another approach, then this will end. It seems to me that Saakashvili's decision to use force was drawing the line. Maybe he didn't understand it himself. Probably, after that - I do not like the word "never" - but it is very difficult to imagine that Abkhazia and South Ossetia will someday be part of Georgia. And as a matter of fact, I have a bad attitude to all this. To this whole situation. She's extremely unpleasant. But I believe that from the point of view of Russian statehood and Russian politics, this is the right thing to do. Yes, they should have been recognized, ”Vladimir Pozner said at the Echo of Moscow radio station in 2008 after the hostilities and Russia's recognition of the“ independence ”of Abkhazia and South Ossetia.

And in the future, Posner was distinguished by his Georgianophobic statements. In particular, he lied that the Georgians allegedly "beat" and "despised" the Abkhaz, which could not be by definition, since the Georgians have always considered Abkhaz brothers and one people with them.

This one provocation did not end in Tbilisi. Unknown persons painted the monument to Alexander Griboyedov with anti-Russian slogans. Here, the interest of the Armenian lobby in showing Georgians as “Russophobes and allegedly“ haters of Griboyedov ”is visible to the naked eye. All Armenian and pro-Armenian media outlets reported about the desecration of the Griboyedov monument, and the Armenians' social networks recalled how much Griboyedov had done for them. Still, Griboyedov is considered a symbol of Russian-Armenian "friendship". After all, it was he who contributed to the mass resettlement of Armenians to Azerbaijani lands. True, it was the Armenians who killed him. Recall that Griboyedov stood up for an Armenian eunuch hiding in his embassy, ​​robbing the Shah's treasury, persuading the two concubines of Shah to flee, who had access to information about the life of the Qajar court. Therefore, the indignant crowd rushed into the embassy to punish the traitor, and at the same time, Griboyedov and the embassy staff were killed.

If we return to the personality of Vladimir Pozner, then this is one of the few journalists of the liberal pro-Western plan in the Russian Federation, who “fully” supports the Armenian nationalists, and even more zealously than, for example, the “imperial” Zatulin.

Vladimir Pozner repeatedly gave pro-Armenian interviews and even once expressed regret that he could not visit Nagorno-Karabakh during his visit to Armenia to express his position. Posner was going to come to the occupied territories, according to him, so that everyone, including Azerbaijanis, would understand that "his heart is on this site, not that one."

And in the fall of 2019, an outrageous incident took place: in the United States, in California, Azerbaijani journalist Arzu Mammadova, informing the audience that Karabakh is the territory of Azerbaijan, there are UN resolutions on the need to de-occupy it, and no country recognizes the independence of the so-called. "NKR" urged Vladimir Pozner not to demonstrate a discriminatory attitude towards Azerbaijanis.

In response to this, Pozner said: "Nagorno-Karabakh is the officially recognized territory of Armenia."

Cynicism, of course, is transcendental. After all, neither under Kocharyan, nor under Sargsyan, nor under Pashinyan, Armenia itself did not officially recognize the separatist "NKR" either "independent" or "the territory of Armenia."

After the start of the second war in Karabakh, at the end of September 2020, Vladimir Pozner, together with other minions of the Armenian lobby, tried to support Armenian separatism as best he could:

“I have been to Armenia a lot, I have many Armenian friends, I know very well what happened in 1915, what many countries recognized as the Armenian Genocide by Turkey, I am aware of a number of statements by the President of Azerbaijan regarding Armenia’s right to exist. Emotionally, I am on the side of Armenia ... ”- Pozner said then.

Posner's arrival in Tbilisi was especially accompanied by an appropriate information background in order to provoke a negative reaction from the Georgian public. Otherwise, the arrival of the scandalous journalist would simply not have been noticed. Moreover, it is not the first time that Posner has flown in to celebrate his birthday in Tbilisi.

“I have been celebrating my birthday in Tbilisi for the third year already. I came not to talk about politics, but to celebrate my birthday ”- this is how Vladimir Pozner said about his visit to Georgia this year, 2021.

However, this time Pozner's trip to Tbilisi was especially "arranged" so that the indignation of the Georgians was as great as possible. In particular, according to another Russian journalist, editor-in-chief of the Dozhd TV channel, Tikhon Dzyadko, who arrived on a flight with Pozner, a charter was specially organized for Pozner in the absence of an official regular communication between the Russian Federation and Georgia:

“We flew from Vnukovo to Yerevan, and from there to Tbilisi, and were surprised to see a flight straight to Tbilisi on the scoreboard at the airport - there have been no direct flights for almost two years. Well, people can afford to pay for the charter - well done, I would do that too if I could afford it. But what happened next was, to put it mildly, indecent.

If anyone does not know, curfew begins in Tbilisi at 21 o'clock. This means that everything is closed, there are almost no people and cars on the street, shops, restaurants, pharmacies, and everything else are closed. For violation - a fine of 600 dollars (for Georgia, not a fortune, but several whole fortunes. UPD - several people in the comments were offended by this phrase; it means “this is a very large fine” (and for Russia too)). Exceptions are only for those who receive special passes - this is a small contingent of people, not at all like in Moscow in the spring. People are very tired of this, it's hard to be so dependent on these restrictions (for example, we didn't have time to buy Misha's diapers today. But we are nothing - tourists and people have been living this way for more than six months).

And against this background, a charter flight arrives in Tbilisi for the holiday. As the story goes, the following happens. The plane arrives at about 8:00. One of the participants of the event, with the help of the authorities, will arrange passes for all guests. By bus, everyone is brought to the hotel in Istanbul. From there, when the curfew begins, everyone is taken to the Vinotel for dinner. And the procession is headed by a police car with flashing lights. Further, there is already happening what happened - a rally, throwing eggs, and swearing.

Of course, throwing eggs and cursing people is not very cool. But to step on the national tragedy of the country with your statements about Abkhazia and then come as if nothing had happened is several times less cool, you need to be prepared for the fact that part of society will express its attitude to this - simply because for Georgia, this is a story about thousands of those killed and 250 thousand refugees. And to arrange your visit in such a way that it turns out that the colonialists from the mainland came with the help of the police to have a good time while the natives are sitting at home and cannot even go to the store - this is not just not cool, it is a rather shameful story. " - said Tikhon Dzyadko.

What conclusion can be drawn from the available information? The scandal surrounding Posner's arrival was deliberately provoked. And serious forces were involved - the devil was organized, the escort of the "distinguished guest" in Tbilisi was provided, and in violation of the curfew and all the restrictions that the citizens in Georgia are already tired of.

Everything was done in order to provoke a painful negative reaction. The provocation was organized by those who are well aware of the emotionality of the Georgian people and the "vulnerabilities" in the national memory.

The most interesting thing is that immediately after the incident with Vladimir Pozner, intensive advertising began for Russian tourist trips not only to separatist Abkhazia but also to “sunny Armenia”. As ordered...