The Moscow Treaty and the 'Yerevan Rake' - 100 Years Later 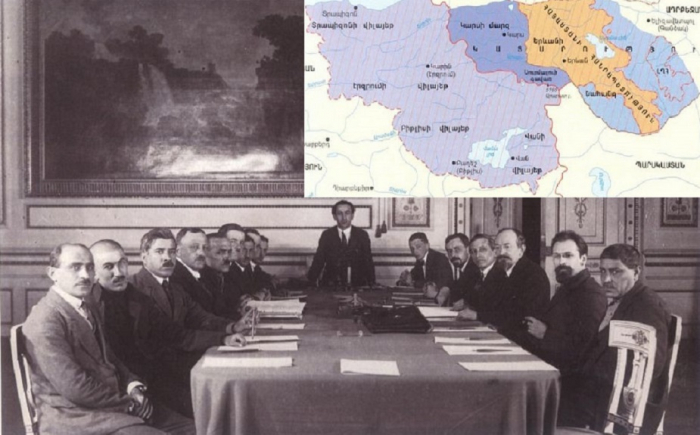 March 16, 2021, marks exactly 100 years since the signing of the Moscow Treaty between Turkey and Soviet Russia, which defined the current borders in the Caucasus. They are very dissatisfied with this agreement, Armenian nationalists “curse” it demanding denunciation, considering that it is “unjust” towards them.

But let us ask ourselves a question: could it be otherwise? Especially considering the passion of the same Armenian nationalists (at that time Dashnaks) for betrayal and their blatant ingratitude towards benefactors and the desire to use "high patrons" in order to deal with neighboring peoples and take their lands.

Let's not remind once again how the Armenian nationalists betrayed so much of the good that the Ottoman Empire had done for the Armenians - this is well known. But they betrayed not only her in the fateful years of the First World War. They betrayed their benefactor, Emperor Nicholas II, and the Russian monarchy in general.

The February Revolution of 1917, which marked the beginning of the Russian catastrophe, was also prepared and brought closer by the Dashnaks as best they could, entering into a secret conspiracy with Russia's “allies” in the Entente. Dashnak Khatisov (the Tiflis mayor) was the key figure who "sentenced" Nicholas II at a meeting of the conspirators in Moscow with Prince Lvov in December 1916.

The Dashnaks supported the February Revolution largely because the Western "allies" who prepared it had promised them an "independent" Armenia in Turkish lands (Nicholas II would have limited the claims of the Armenian nationalists to autonomy or protectorate). In addition, by the beginning of 1917, the need for Russia's participation in the war had greatly diminished; the United States was preparing to join the war on the side of the Entente.

And by October 1917, it would seem that with the betrayal of the tsar, the Armenian nationalists succeeded. Their protege Kerensky, who became famous for protecting the Dashnak terrorists in court, was in power. The lands of Eastern Turkey, conquered by Russian weapons, completely controlled and carried out an unprecedented terror against the Muslim population - Turks, Kurds, Adjarians, Laz, “clearing the territory” for the future “great Armenia”.

However, the United States entered the First World War not at all for reasons of "altruism"; they wanted to "reap" the fruits of the victory of the Entente instead of the "knocked out revolution" from among the victors of Russia. Interestingly, the Wall Street tycoons "financed" Leon Trotsky and organized his return to Russia in 1917. Thus, with the help of some and with the tacit consent of other Entente powers, the Bolsheviks came to power in Russia in October 1917. The Brest Peace, concluded by them with Germany and its allies, overnight canceled all the plans of the Dashnaks.

The Dashnaks had to urgently "find a common language" with the Turks, who were already loyal to them. Hovhannes Kachaznuni and his associates succeeded in this, organizing the first republic of Armenia on the Azerbaijani lands given to the Armenians for their "state hearth". Of course, not "great", but quite enough to get along peacefully with neighbors.

Germany and the Ottoman Empire were defeated in the First World War. And the very first thing the Dashnaks rushed to conquer lands from their neighbors - for example, the Armenian-Georgian war began and the Dashnaks' attempts to seize Azerbaijani Karabakh. The Dashnaks also began to look for new "patrons among the winners", trying to play on the interests of Britain, France, and the United States, "sell the Armenian project" at a higher price and snatch more foreign lands for themselves.

The USA became interested in this project, which in 1918-1920. took their first steps as a world power. The idea of ​​getting his own "protectorate and outpost" in the person of the newly created Armenia to President Woodrow Wilson seemed tempting (that's why the United States largely outlined the "exorbitant" size of Armenia according to the Treaty of Sevres imposed by the Ottoman Empire).

At the same time, "by default" it was assumed that this "Wilsonian Armenia" receives control over the port of Batumi, to which the railway approached and through which oil and oil products were pumped from Baku.

But at that time, a real and full-fledged US protectorate over Armenia was unrealistic. The fiction of a protectorate with responsibility for territories, but without the ability to fully influence the situation in the region, was not really needed by the United States. Indeed, in the Eastern Hemisphere, the United States had no other "outposts", and Britain and France did not let the Americans into their "colonial empires".

Considering the "alignment of forces", one can also understand that the same American bankers financed Leon Trotsky (and, in fact, the coming of the Bolsheviks to power) for a reason. The Bolsheviks were viewed by many in the United States as a real "counterbalance" to the growing influence of the British Empire. In any case, in addition to the oil fields in Iraq that they had already taken over, the United States did not really want Baku to be "handed over" to the British. Control over strategically important oil fields and the strategic route of their transportation (Baku-Batumi) by Soviet Russia was viewed in Washington as a "lesser evil".

In addition, the Dashnaks clearly played not even a double, but a “triple” game and tried to get their “Sevres Armenia” from Woodrow Wilson, and to please the British in order to achieve an additional “increment of Armenian lands” with the French, claiming Cilicia.

The appetites of the Armenian nationalists were exorbitant. Moreover, they were actually backed by Dashnak bandits, who had “proven” themselves in looting and killing civilians, but absolutely incapable of fighting as an army, when there was no real regional military force behind them.

The Turkish people also intervened in the “game”, disagreeing with the enslaving “Sevres capitulation”. The role of British puppets, which was assigned to the Sultan's government, who occupied Istanbul by the power of the Entente, also did not "inspire" anyone in Turkey. Mustafa Kemal (future Ataturk) and the National Assembly in Ankara prevented the "surrender" of Turkish lands. The Sevres Treaty was never ratified.

The attempts of the Dashnaks to take ahead of time by force what they bargained for under the Treaty of Sevres ended in war, the defeat of Armenia, and the humiliating Treaty of Alexandopol, according to which Armenia ceded even Alexandropol (Gyumri) to Turkey. And again, once again, the Armenians were saved by Russia, at that time Soviet, which “settled the situation” and achieved the present internationally recognized borders of the Armenian state.

History teaches nothing to Armenian nationalists. And in the future, in their betrayal of their saviors and benefactors, they began to step on the same rake.

Did Armenians live badly in the USSR? Didn't they have all the rights and opportunities? But who then began to destroy the USSR first? Balts? Western Ukrainians? No way!

It was the Armenian nationalists who were the first to split the USSR. Again, according to scripts written by the same Western "allies".

You didn't have to be “academician Aganbegyan” to understand that the demand to annex Nagorno-Karabakh from one union republic to another is the beginning of the collapse of the USSR and nothing else.

What is the significance of the administrative subordination of a particular territory in a single country? None! Who now in same Russia in their right mind will fight for, say, the city of Kolomna to belong not to Moscow, but to Ryazan region? What's the difference if Russia continues to be united?

A man lives in his own Kolomna, and no one asks what his roots are "Moscow", "Ryazan" or Kolomna. He, of course, can consider himself a "great and ancient Ryazan" and compose a myth about the "Ryazan Empire" (by the way, not as wild as about "Great Armenia" - the Grand Duchy of Ryazan actually existed until 1521, unlike the "Armenian state »Which never existed until the 20th century). But apart from psychiatrists, few people will be interested in such fantasies.

But now, if someone in Ryazan starts to fight for Kolomna's "miatsum", it's time to sound the alarm. This means Russia is being "poured" and torn apart along the borders of the regions.

It is interesting to know why such obvious things did not reach the Russian patriots in 1988-1991 !? Why did they sympathize with those who dug the grave of Great Russia in the form of the USSR?

One way or another, but for the betrayal of Russia, the Armenian nationalists received their "payment", moreover, "torn out" by the hands of the deceived Russians. They occupied Azerbaijani Karabakh and staged genocide and ethnic cleansing of the indigenous Azerbaijani population here. And then, again, the story with the Dashnak's "insatiability", as well as "gratitude" and the search for more powerful patrons, was repeated.

In 2018, the pro-American Pashinyan regime came to power in Yerevan through the "Maidan". Everyone remembers what happened next.'''