Armenians of Abkhazia for Putin and railway transit to Armenia. Georgia is not even asked? 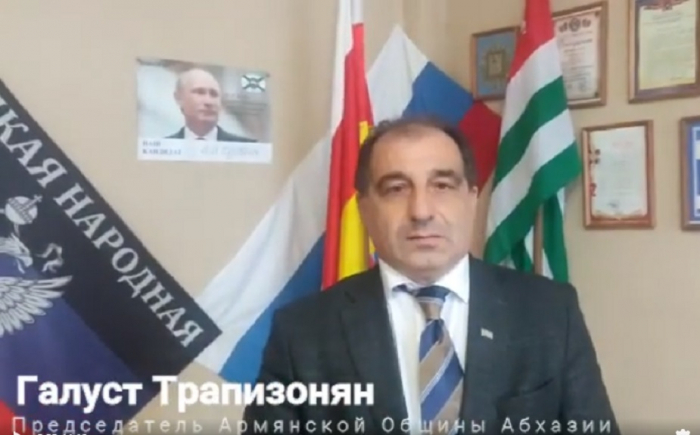 It seems that the Armenian lobby, while President Vladimir Putin, loyal to him, is in power, has decided to seriously involve Russia in new adventures. Again, speculating with their imaginary "loyalty". This is how the joining of the Armenian community of Abkhazia to the headquarters of support of Vladimir Putin, formed by separatist public organizations in the occupied Georgian territories in Sukhumi, should be regarded.

Trapizonyan says that for separatist Abkhazia "Russia is a neighbor, a strategic partner, and the peoples of the two countries are linked by close friendly relations." Moreover, judging by the tendencies, the "people of Abkhazia" and "strategic partner of Russia" will soon be almost exclusively Armenians, whose number is growing every day due to the massive migration of the Armenian population from the liberated Azerbaijani Karabakh and the Republic of Armenia.

Immediately after the demonstrative support by the Armenians of Abkhazia for Vladimir Putin and the creation of the corresponding "Headquarters", another event clearly associated with him took place. The separatist so-called "parliament" again raised the issue of opening the Abkhazian section of the railway for transit to Armenia.

On February 4, 2021, the so-called “Parliament of Abkhazia” appealed to the State Duma of Russia with a statement that the separatist “republic” was ready “on equal terms” to participate in the project to open a railway link between Russia and Armenia through Abkhazia. The chairman of the committee of the so-called. "People's Assembly" for international, inter-parliamentary relations and relations with compatriots Astamur Logua.

“The initiative belongs to our committee. Since we are monitoring what is happening in the region and the conflict that took place in Nagorno-Karabakh, and which is resolved in this way. We welcome the unblocking of transport communications, ”Astamur Logua said, but it is clear that the initiative comes from the Armenian lobby.

The separatist noted that "Abkhazia has always declared that it is ready to participate in large regional projects on equal terms." Proceeding from the fact that after the end of the war in Nagorno-Karabakh, the countries of the region began to discuss the possibility of opening a railway connection, Abkhazia should not remain indifferent, Astamur Logua noted.

"Abkhazia must be unblocked, respectively, we are carrying out work, which is supported by our colleagues in the Parliament, in the Foreign Ministry. We hope that we will achieve that Abkhazia will participate in the project on equal terms," ​​the separatist "deputy" said.

Understood, the separatist "deputy" did not say a word about the return of Georgian refugees and the restoration of the territorial integrity of Georgia. They only specifically emphasized that the opening of the road is necessary for transit to Armenia.

It is alarming that the separatists do not even mention the opening of transit through Abkhazia for Armenia as an "already resolved issue" neither about Georgia nor about its consent. What does this mean? Unfortunately, it is most likely that there is a plan of real aggression and breaking through the so-called "corridor" through Georgia towards Armenia.

It is not for nothing that in Armenia itself the executioner of Khojaly and war criminal Robert Kocharian, whom the Armenian lobby in Russia is clearly "dragging" again into the presidency of Armenia, has become more active. Information from Armenia persists that there are forces in the Armenian army that are ready to carry out a military coup and immediately start a war against Azerbaijan with the aim of revenge.
Simultaneously with terrorist provocations against their own, the Armenian population, and screaming about the "threat of genocide", these adventurers hope to drag Russia into a big war. And then it is planned to move Russian troops to the aid of the Armenian aggressors through the occupied territories of Abkhazia and the Tskhinvali region and further through the territory of Georgia. Including by rail as the most logistic route.

However, even if this adventure does not work out, the Armenian nationalists are interested in Vladimir Putin's help to turn Abkhazia into “another Armenia” - a seaside one. With the prospects of expanding it at the expense of the Krasnodar Territory of the Russian Federation, where the Armenian diaspora is also slowly taking over everything.

All this testifies to the fact that another Armenian “state” is clearly “planned” by the Armenian nationalists on the shores of the Black Sea. The population for this state is already massively moving from the Republic of Armenia (in addition to the hundreds of thousands of Armenians already living in the Krasnodar Territory and Abkhazia). The rationale that it is "ancient" and that the Armenians here are "indigenous" Armenian falsifiers have already begun to compose.