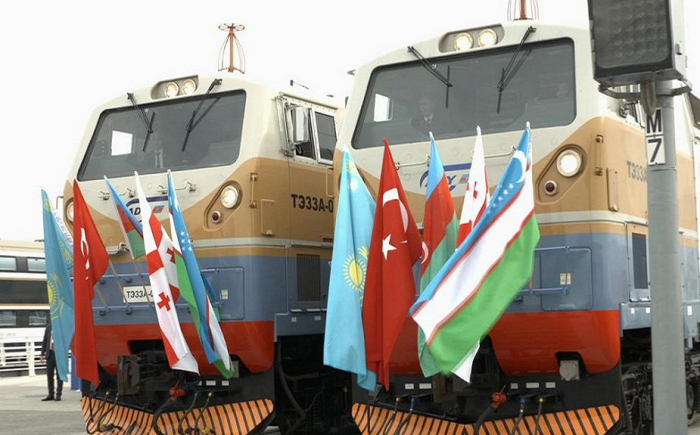 The victory of Azerbaijan in the second Karabakh war and the liberation of the occupied territories somewhat overshadowed another, no less important event of a "transcontinental scale", namely the organization of regular cargo traffic along the Baku-Tbilisi-Kars route. Considering that Armenia was the opponent of this transit, then the Yerevan regime and those behind it suffered a "double defeat". Moreover, the consequences of which defeat for the Armenian lobby will be more catastrophic are not yet known.

It is no secret that Yerevan positioned the very fact of the occupation of Azerbaijani Karabakh by its army as the fact that transit lines are “under the gun” of both the Armenian army and the separatists sponsored by Yerevan (in particular, the “Javakhk”). And experts tried to convince same China that this is the "key factor of the" riskiness "of transit along the Baku-Tbilisi-Kars highway. And, of course, such risks were completely satisfied with the Kremlin, which offered its "alternative" to rail transit through Baku and Tbilisi.

However, the mediocre policy of the Armenian lobby, first of all of Sergey Lavrov-Kalantarov, led to the fact that the Russian Federation could not make full use of the existing transit possibilities. First of all, due to the support of the same Kalantarov for separatism and the redrawing of borders, railway transit from the PRC through the Russian Federation "ran into" a sharp deterioration in relations between the Russian Federation and Ukraine, and then Poland. As a result, it turns out that Baku-Tbilisi-Kars intercepts most of the Eurasian rail transit from the Kremlin and Russian Railways before our very eyes.

Armenian and pro-Armenian experts have to note this. In particular, the Russian expert and historian Maxim Medovarov, known for his aggressive pro-Revan stance and hatred of Georgia. Here are excerpts from his posts on the Facebook social network about the start of traffic on the Baku-Tbilisi-Kars highway:

“Do you want new evidence of the absolute political incompetence of both the current Russian foreign policy and the Ministry of Foreign Affairs and the delusional programs of many of our“ nationalists ”? And here it is.

China conspired with Turkey and started the movement of freight trains bypassing Russia. They travel through the whole of Kazakhstan, cross the Caspian Sea by ferry to Baku, from there go to Tbilisi and then to Turkey...

The Russian authorities and diplomacy have done nothing to ensure that the most important trade routes go through our territory. So that Kazakhstan, Azerbaijan, Georgia were at least de facto, if not de jure, our territory..."

In response to the objection of one of the Armenian users that supposedly transit through Georgia is “unprofitable”, Maxim Medovarov clarifies:

“Why is it unprofitable through Georgia? It is beneficial to everyone except Russia. If we were not engaged in diplomacy ... s, then the number one goal would be a change of power in Georgia and the immediate resumption of transit, including the railway through Abkhazia."

In fact, Maksim Medovarov here "retransmits" the anti-Georgian intentions of many figures in the Kremlin and in Yerevan. They had long had plans to carry out a pro-Armenian coup in Georgia, bring Armenian puppets from the “fifth column” to power here, and open transit for Armenia through Abkhazia, without its de-occupation and the return of refugees. At the same time, "cutting off" the transit of Baku-Tbilisi-Kars.

It is clear that people like Maksim Medovarov are already waving their fists after the fight. The preparations for the coup d'etat in Georgia and the Armenian transit through Abkhazia were successfully "buried" by the liberation of Karabakh from the Armenian occupation and the surrender of Armenia.

Another pro-Armenian expert, Stanislav Tarasov, does not hide his disappointment at the start of the transcontinental movement along the Baku-Tbilisi-Kars highway in the article “Zurabishvili Wants to Meet with Putin and Erdogan” (https://regnum.ru/news/polit/3152044.html):

“… The process of changes in Karabakh in particular and in Transcaucasia, in general, is entering a new phase. Georgian President Salome Zurabishvili began to demonstrate opportunism in relation to the position of France, which opposes any alliances with Ankara and which is alarmed by the possibility of an alliance emerging in the region without the participation of the US and the EU. The question also arises in the presence of NATO in Georgia. The dynamics of processes in the region is gaining momentum.

Few expected that after the signing of the peace trilateral agreement between Russia, Azerbaijan, and Armenia to end the Karabakh war, events in Transcaucasia would develop so quickly.
Although the Turkish edition of Hürriyet, carefully analyzing the emerging new situation in the region, warned that “the outwardly visible course of events is only the surface part of the iceberg, and the main part of the ice block is deep underwater, where it went, goes and will, apparently, continue the struggle between world powers ”.

Indeed, the interests of Russia, the West, Turkey, and Iran are closely intertwined in the Transcaucasus. The Nagorno-Karabakh conflict itself has long been integrated into a complex conglomerate of processes passing through Syria to Libya and processes rooted in Georgia. Shifts in any of these directions immediately lead to changes in geopolitical factors. Judge for yourself. Not long ago, as the German newspaper, Cicero writes, "Georgia has developed in a positive direction for the West, leaving behind not only the candidates for membership in the European Union from the former Yugoslavia but also some EU member states."

And suddenly Brussels began to express concern that Tbilisi might turn from the pro-Western path. Why? Turkish edition Haber7 reports that Georgian President Salome Zurabishvili, speaking at the Conference of Georgian Ambassadors 2020, supported the proposal of Turkish President Recep Tayyip Erdogan to participate in the Cooperation Platform of six countries: Russia - Turkey - Iran - Georgia - Azerbaijan - Armenia. According to the newspaper, this also implies contacts between Tbilisi and Moscow at the highest level….

Just a cursory glance at the geographical map is enough to understand how beneficial Georgia's strategic position as a nodal point in trade between East and West was in the conditions of the Nagorno-Karabakh conflict, especially on the so-called Silk Road. She took advantage of these advantages. Now the situation has changed, and we must hurry with new solutions.

Nothing has passed since the signing on November 10 of an agreement to end the Karabakh war, and on December 4, the first Turkey-China freight train was sent from Istanbul to China. On December 20, he arrived at his destination - the Chinese city of Xi'an. In two weeks of its journey, the train crossed two continents, two seas, and five countries, covered a distance of 8693 km through Turkey, Georgia, Azerbaijan, the Caspian Sea, and Kazakhstan. According to the statement of the Turkish Foreign Ministry, the train proceeded along the Trans-Caspian Middle East-West corridor and along the Baku-Tbilisi-Kars railway. The "Historical Journey" included more than 2,300 kilometers through Turkey, 220 kilometers through Georgia, 430 kilometers through Azerbaijan, 420 kilometers across the Caspian Sea (by ferry), 3,200 km, and 2,100 km through Kazakhstan and China, respectively. The 754 m long train transported household appliances..."

And although Stanislav Tarasov is trying to "shake Georgia's position" by the fact that Azerbaijan may have an "alternative" in connection with Russian peacekeepers, he is clearly posing as wishful thinking and is feverishly trying to drag Georgia into ambiguous Armenian adventures. Here is his "reasoning":

“The Azerbaijani Defense Ministry reported that Russia had sent cargo intended for peacekeepers in Karabakh by rail to Azerbaijan, such actions will be carried out in accordance with the protocol signed between Baku and Moscow. There is a great likelihood of putting into operation the airport in Stepanakert, which is hypothetically capable of receiving heavy military transport aircraft. It can also become a logistics center for the transportation of civilian goods, and in the future, it may turn out to be an important component of the economic growth of Nagorno-Karabakh.

A direct route from Russia would remove many of the logistics and supply problems and create new operational capabilities for the military grouping of the 15th peacekeeping brigade. This can benefit the project of building a road from Azerbaijan to Nakhichevan autonomy. There are proposals to restore the railway communication and create a railway line that could connect Nagorno-Karabakh with Armenia. It is no coincidence that the Chinese city of Xi'an is building sister-city ties with Gyumri. So the changes in Karabakh and Transcaucasia are entering a new phase."

It seems that Stanislav Tarasov does not want to come to terms with the fact that Artsakh has already ceased to exist. And the Russian peacekeepers do not solve the issues of the development of the economy of Azerbaijani Karabakh and the operation of airports on the Azerbaijani territory, and by definition, they cannot link these issues with the construction of a road to Nakhichevan (they will stay in the region for a maximum of 5 years and leave it). Therefore, Georgia does not need either Russian peacekeepers or Armenian "mediators" for cooperation with Azerbaijan.

Also, that Stanislav Tarasov cannot oppose the following facts: “The Turkish media, referring to Erdogan, report that“ Tbilisi has already reached Ankara in order to discuss practical preparations for organizing diplomatic efforts to form a security and cooperation system in the region in the format of “platform six”, that Erdogan discussed this topic with Russian President Vladimir Putin, who "reacted positively to this project."

Despite the obvious attempts of Stanislav Tarasov to inspire the Georgian public with doubts about Turkey and Azerbaijan as partners and to force Tbilisi to join the Armenian adventures, nothing will come of it.

Baku and Ankara not only give Georgia colossal prospects for economic development in connection with transit but also proved that they are real allies of Georgia and consistently advocate the restoration of its territorial integrity. In Yerevan, on the contrary, they regard Georgian Abkhazia as “another Armenian state” and continue to support the “Javakhk” separatism on key transit routes passing through the south of Georgia.