27th anniversary of the fall of Sukhumi - the separatists abandoned the parade. There is nothing to celebrate or for nothing? 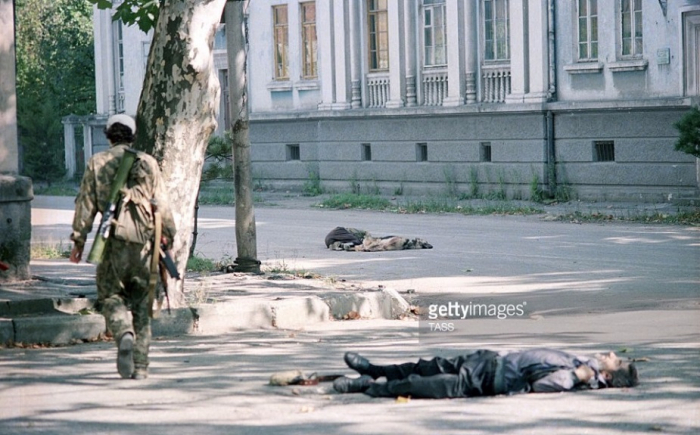 As you know, the separatists are very fond of pompously celebrating their "victories". The tone here is set, of course, by Armenian nationalists and "Artsakh" separatists, who from year to year on May 9 pompously celebrate the seizure of the Azerbaijani city of Shusha, the ancient capital of the Karabakh Khanate.

By analogy, the Abkhaz separatists, who are in fact subordinate to the Armenian lobby, have a significant holiday. For them, the main "holiday" is the tragedy of the Georgian people - the fall of Sukhumi on September 27, 1993, in the streets of which separatists and Armenian militants staged monstrous atrocities against the peaceful Georgian population. And from year to year the delegation of the separatist "Artsakh" along with "veterans" - militants from the battalion named after. Baghramyan were the main and welcome guests at the separatist "victory parade" in honor of the seizure of Sukhumi by the separatists along with "trophies" in the form of housing and property of killed and expelled Georgians.

However, the current situation of separatist Abkhazia is such that funds are sorely lacking for the banal survival of the regime. Due to the coronavirus epidemic, the tourist season was disrupted, and aid from the Russian occupying Abkhazia is coming in sharply reduced volumes. And clear hints are heard from Moscow that if they are not allowed to sell land and real estate in Abkhazia to Russian citizens (it is clear that they are mainly of Armenian nationality), then separatists will not see subsidies from Russia at all.

As a result, the separatists, for the first time in many years, had no time for a pompous parade. There is simply no money for the "main separatist holiday". And what to celebrate? Another stage of degradation of the Abkhaz ethnos, which is about to be deprived of land and real estate, forcing everything to be sold to the Armenians for a pittance?

Deputies of the separatist "parliament" on September 24 adopted a resolution asking the separatist "president" Aslan Bzhania to cancel the celebrations timed to the 27th anniversary of the so-called "victory in the patriotic war of the people of Abkhazia in 1992-1993" - this is how the separatists call the seizure of Sukhumi and ethnic cleansing of the Georgian population. As the press service of the separatist "Cabinet of Ministers" clarified, due to the epidemiological situation in Sukhumi, a solemn military parade, an action "Immortal Regiment" and an exhibition of weapons were canceled.

In principle, the situation of the majority of Abkhazians has become desperate in the last year. They literally have nothing to live on, nothing to eat, huge debts, it is unrealistic to pay them, given the lack of income from tourism. Abkhazians are already "ripe" to sell both their housing and "trophy" literally in order to pay off the Great Dane and not die of hunger - and in this desperate situation the Abkhaz people, apparently, are specially "driven" by their "well-wishers" an eye on the Abkhaz land.

Therefore, the recollections of how the "winners" dragged the stolen goods of the killed and expelled Georgians by trucks to them, stuffed them into sheds, how all this goodness rotted, how relatives and friends died prematurely in actually damned "trophy" houses and apartments - cause only bitterness. Someone else's good did not bring happiness, as did the "trophy" houses and apartments. And separatism has never made any people happy.