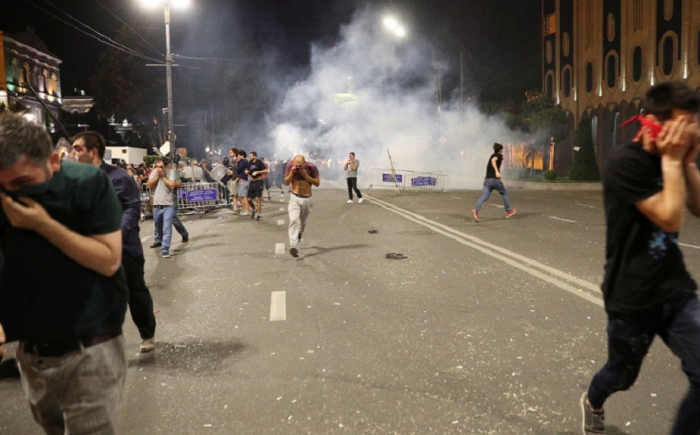 In the “Maidan” state coup in Kiev in 2014, the militants of the Armenian terrorist organization ASALA played a key role. Not only that they burned "Molotov cocktails" to the police - specifically one of the militants - Sergey Nigoyan - was killed by his own people, becoming the first "ritual victim". This made the Maidan coup irreversible.

To what this led - everyone knows. Ukraine lost territory and got the bloodiest war in the Donbas. But the Armenian lobby has achieved in this country. Armenian nationalist Arsen Avakov became the head of the Ministry of Internal Affairs and annually arranges thousands of “gay parades”. At the same time, Avakov’s power is such that even the president has changed in Ukraine (Zelensky instead of Poroshenko) - and Avakov remains at his post.

It seems that now Armenian provocateurs want to “blow up” Georgia, set on fire a civil war in it, take away more territories and become “power” in the remaining “patchwork”. In an attempt to unlawfully seize the parliament building in Tbilisi, Armenian provocateurs were directly involved. One of them was detained by the Georgian police.

In the article “The Embassy of Armenia in Georgia seeks to reduce the period of detention of Minasyan” (https://ru.armeniasputnik.am/politics/20190622/19279729/Posolstvo-Armenii-Gruzii-dobivaetsya-sokrascheniya-sroka-soderzhaniya-Minasyana-pod strazhey.html) reported that a citizen of Armenia - Minas Minasyan (born in 1995) was arrested during the riots in Tbilisi. And then the Armenian embassy began to make desperate attempts to free him.

It is reported that: “Diplomats of the Armenian Embassy in Georgia on the same day visited Minasyan. The young man said that he had no complaints and problems, he was treated with respect.

The embassy staff also arranged telephone conversations with Minasyan’s relatives and agreed with the Georgian guards about organizing a meeting with one of the parents as soon as possible. In addition, the embassy, with the help of a lawyer, appealed to the court with a complaint about the shortening of the term of Minasyan’s detention. It is noted that the staff of the Ombudsman’s Office of Georgia visited the Armenian citizen. ”

What a touching concern for the criminal who participated in the attempt to seize the parliament of a foreign country! Especially on the background of those terrible tortures and mockeries that were done against Georgian militants by Bagramyan battalion in Abkhazia.

At the same time, we note that there is not even a gram of condemnation addressed to the provocateur and a foreign citizen who participated in the unlawful seizure of the highest legislative body of the supposedly “friendly” Armenia of Georgia. It is clear that this is an agent of the Armenian special services - hence the attempts to “pull him out” rather that he does not surrender the Armenian intelligence network to the Georgian authorities.

There is no doubt that the Armenian special services are involved in the destabilization of the internal situation in Georgia and the participation of Armenian citizens and individuals of Armenian nationality in disorder is a proven fact.