Does Armenian lobby prepare for Russian invasion of Georgia? 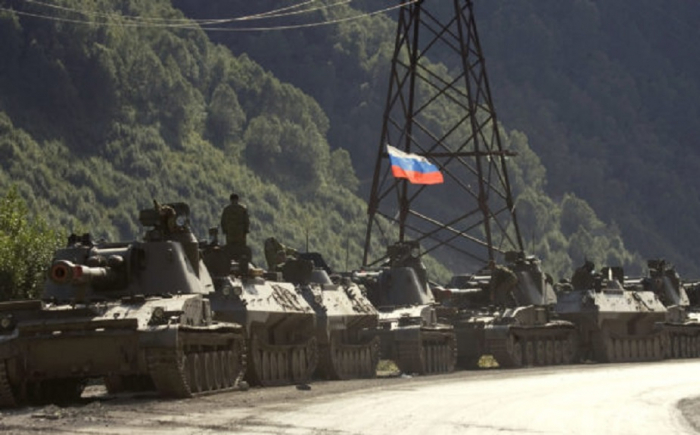 In the region of the South Caucasus, the “big war” smelled. On July 15, on the third day of armed clashes that began with the military provocation of Armenia on the Armenian-Azerbaijani border, in the area of ​​the Armenian-Turkish border, helicopters of the 102nd base of the Russian Armed Forces in Gyumri were noticed.

At the same time, military exercises of the Russian Armed Forces in the occupied Georgian territories are ongoing, and all units of the 58th Russian army deployed here are put on high alert.

As you know, organizing its military provocations on the border with Azerbaijan, Armenia hoped-for intervention on its side of Russia as a “CSTO ally”. However, in order to deploy an army group and come to the rescue, the “ally” needs time - at least a few days. And during this time, Armenia could well cease to exist as a state. Therefore, the Armenian aggressors needed the Russian military machine to be “ready”.

The fact that the Armenian military provocation in the Tovuz region was carefully prepared and agreed with the pro-Armenian “fifth column” in Russia itself is evidenced by the fact that it was “synchronized” with large-scale military exercises of the RF Armed Forces, conducted both in the south of Russia itself and in occupied territories of Georgia (in Abkhazia and the Tskhinvali region), as well as in the area of ​​deployment of 102 Russian military bases near Gyumri in the Republic of Armenia.

Against the backdrop of this military activity, there were calls by Armenian "military experts" that Russia should "urgently come to the aid" of Armenia as part of the "allied commitments under the Collective Security Treaty Organization." However, since the Russian Federation and Armenia do not have a common border, the thing is clear, it was said that Russian troops should “break through the corridor” along the unoccupied territory of Georgia. And as a “justification” for such an invasion, there could well have been provocations on the dividing line.

That is why for provocation the Armenian military did not choose the front line in Karabakh on the occupied territory of Azerbaijan, but a section of the internationally recognized Armenian-Azerbaijani border close to the junction of the borders of Armenia, Azerbaijan and Georgia.

The shortest distance of the “corridor” between the Tskhinvali region occupied by the Russian Federation and today the “hot” section of the Armenian-Azerbaijani border in the Tovuz and Gazakh regions is only about 4 hours by tank on the highway.

According to the press service of the Southern Military District of the Armed Forces of Russia., Large-scale exercises started in units on the territory of the Rostov and Volgograd regions, in North Ossetia, as well as on the territory of the occupied RF of Abkhazia and the Tskhinvali region. The 102nd Russian base, which is part of the Southern Military District, is also involved in the exercises.

It is reported that different types of troops were involved in the exercises - armored, missile and artillery units, aviation, etc. Moreover, Russian helicopters from the 102nd base located in Gyumri defiantly flew up to the Armenian-Turkish border immediately after Ankara’s statements about supporting Baku against the background of escalation on the Armenian-Azerbaijani border.

Also, by “accidental coincidence”, joint tactical exercises of artillerymen of the 58th combined arms army of the Southern Military District (Southeast) of the Russian Federation and Tskhinvali separatists took place almost simultaneously with the incident on the demarcation line in the Tskhinvali region, when a Georgian citizen Zaza Gakheladze was wounded and detained by a patrol of invaders and separatists. On July 15, the press service of the Southern Military District officially announced the exercises near Tskhinvali. According to the agency, the firing took place at the Dzartsemi training ground in mountainous conditions. It was reported that target detection and coordination of artillery fire was carried out using drones. The targets depicting the enemy were destroyed with the help of 2C3 Akatsiya self-propelled howitzers and the Sled towed mortar systems.

Thus, Georgia is now in fact in a situation where, at any time, simultaneously with a new large-scale Armenian aggression against Azerbaijan, a Russian military invasion of Georgia can be provoked. Under the pretext of “assistance to the allied Armenia” and “ensuring the security” of the separatists.

Moreover, in case Turkey sided with Azerbaijan in the event of a new large-scale Armenian aggression, the possibility was also assumed of the occupation by the Russian troops of the entire territory of Georgia in order to enter the Georgian-Turkish border. Such plans have been known for a long time and now Armenian nationalists have again “remembered” them. And Russian helicopters flew up to the Armenian-Turkish border, too, for good reason. It’s clear that they showed a grin - “a demonstration of strength."

However, there is still hope that in Russia the leadership still does not all agree to drag their country into an absolutely unnecessary war in the Armenian interests.