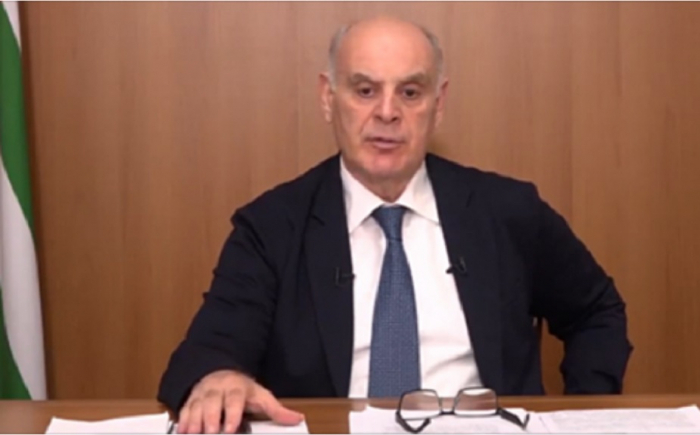 Appointing the leader of the Armenian community of Abkhazia, one of the militant commanders in the battalion named after Baghramyan Galust Trapizonyan chairman of the so-called The “State Committee for Standards, Consumer and Technical Supervision”, the puppet separatist “president” of Abkhazia, Aslan Bzhania, suddenly became stubborn. Instead of starting active preparations for the sale of Abkhazian land and real estate, as demanded by the same Galust Trapizonyan and Ruben Tatulyan, one of the richest Armenians from Sochi, Aslan Bzhaniya said that there would not be such a sale in the next six months or a year.

At an online press conference of IA Interfax, Aslan Bzhania, commenting on the issue of acquiring housing by foreign citizens in Abkhazia, noted that there are currently “no innovations” in this direction: “I take this opportunity to bring to the attention of viewers and those who will watch this press conference that foreigners have the right to acquire real estate in Abkhazia, but for this, they must register a legal entity here. That is, for legal entities registered in the territory of Abkhazia, there are no restrictions. As for individuals, if there is no citizenship of Abkhazia, then people are not endowed with the right to purchase housing. ”

The separatist “president” recalled that the issue of real estate acquisition by Russian citizens has been raised repeatedly: “The issue is being studied. I admit that at this stage, in the next six months or a year, we are not ready to follow this path, our states are not ready, our legal mechanism is not ready. We will continue to study this issue and find a solution that will suit both sides".

Meanwhile, the Armenian lobby right now would like to start buying up Abkhazia. The moment for buyers is very successful. Due to the disruption of the holiday season, the population of Abkhazia became impoverished. Lately, Abkhazians have been counting on tourists from year to year, in-season they earn something from holidaymakers from Russia, then they live on this money for the rest of the time, get into debt to prepare for the new season. Now the holiday season due to the coronavirus lies, people have huge debts and at the same time have neither sources of income, nor clarity when these sources appear.

Therefore, in desperation, many can really sell both land and their own and “trophy” housing for nothing. Armenian businessmen from the neighboring Krasnodar Territory of the Russian Federation were ready to start buying Abkhazia as soon as it opens, and Aslan Bzhania made it clear that he did not intend to contribute to their plans.

You can understand Aslan Bzhania. Apparently, he understands perfectly well that now having sold land and real estate for nothing and having nothing left, the Abkhazians will, therefore, curse him and his family. He does not want to be a clear enemy to his people. Therefore, in his speech, there is also a “hint message” to his Armenian owners - “wait six months or a year, let the situation with tourism and vacationers improve, and then the issue of selling real estate will be resolved.”

But the fact is that Armenian nationalists didn’t drag the Abkhaz people into separatism and fratricidal war with the Georgian people and didn’t “look after” such a paradise on the Black Sea coast as Abkhazia to allow the Abkhazians deceived by them to earn “extra” on the sale of this land. Therefore, most likely they will begin to put pressure on Aslan Bzhania. And it is known through whom - through the government of the Russian Federation, from which the separatist regime depends on the infusions. The benefit is headed by the government of the Russian Federation with Armenian roots Mikhail Mishustin and Sergey Lavrov (Kalantarov).

Aslan Bzhania himself gave a press conference on July 2, at which he admitted that the separatist regime’s money is very bad. It was bad with them anyway, and due to the closed borders, the separatist budget will lose about 2 billion rubles due to the coronavirus. Separatist Abkhazia will not be able to close such a hole on its own, and this was recognized by Bzhania:

“We ourselves cannot get out of this situation. We do not have any prerequisites for this, large industrial enterprises, or other sectors of the economy that could make up for this. Therefore, it will be very difficult. The only way out at this stage is to ask the Russian Federation for help. ”

Well, the puppet asking for money will certainly have conditions. And the sale of real estate to Russian Armenians is one of them. So, most likely, Aslan Bzhania will not be able to resist the sale of land and real estate in Abkhazia in the interests of the Armenian lobby for a long time, and he will have to capitulate in this matter.