Armenia threatens to destroy the Mingachevir hydroelectric dam - i.e. the use of weapons of mass destruction 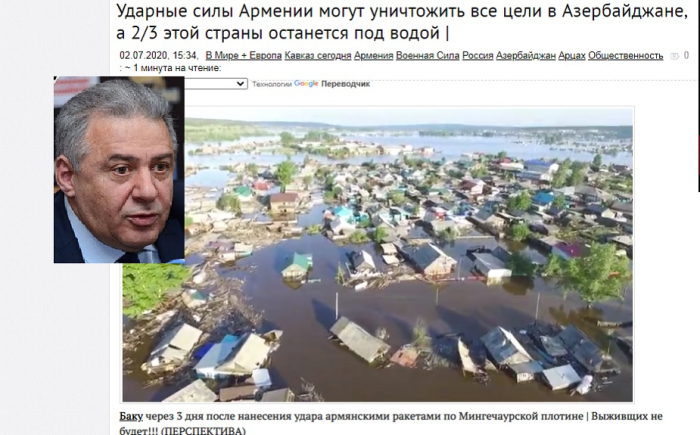 The Republic of Armenia, as recent trends show, is not only aggressive but also absolutely insane in its aggressiveness, a state that poses a threat not only to the South Caucasus region but also to more distant countries. It is enough to recall that such an extremely dangerous facility as the Armenian or Metsamor NPPs still operates on its territory. An accident at this nuclear power plant located in a seismically dangerous zone can turn into a radioactive desert not only Armenia itself but also neighboring countries.

But the global danger emanating from the Yerevan regime is not limited to this. Moreover, high-ranking functionaries of this regime openly boast that they can provoke catastrophes on a global scale, which can lead to the deaths of millions of people.

The recent interview of the former Minister of Defense of Armenia, Lieutenant General Vagarshak Harutyunyan Factor.am, which reprinted fmgnews.info resource under the eloquent heading “Armenian strike forces can destroy all targets in Azerbaijan, cannot be considered as an open threat of maniac terrorists” of this country will remain underwater”(https://www.fmgnews.info/71953-udarnye-sily-armenii-mogut-unichtozhit-vse-celi-v-azerbaydzhane-a-2-3-etoy-strany-ostanetsya-pod -vodoy-.html). And under this heading there is a photo of the houses flooded by the flood, also with the menacing and ominous subtitle “Baku 3 days after being hit by Armenian missiles on the Mingachevir Dam. There will be no survivors !!! (PERSPECTIVE) "

Here is an excerpt from this interview of an Armenian general who in any other country would be considered to have survived from his mind for his words, but not in Armenia obsessed with nationalistic psychosis:

"We have systems, not to mention Iskander, the SCAD missile system, which makes all targets in Azerbaijan accessible. And here I will quote the speech of General Lev Rokhlin in the State Duma of Russia when he said that if the Armenian side uses the SCAD complex taking the Mingachevir reservoir as a target, two-thirds of Azerbaijan will be underwater, said a general who has military experience and is known in Russia. Azerbaijan does not appreciate such things. Baku, the entire oil complex, and our strike forces are capable of destroying Azerbaijan’s economic potential. , which is concentrated in three cities: Baku, Sumgait, Kirovabad. "

The most interesting thing is that Vagarshak Harutyunyan does not hesitate to recall the words of the Russian General Lev Rokhlin, who was killed under strange circumstances, who recalls that he died after exposing the shadow corruption schemes for the supply of Russian arms to Armenia. On April 2, 1997, at a closed meeting of the State Duma, Lev Rokhlin made a report in which he spoke about the illegal transfer of new weapons by Russia to Armenia, which according to the documents was all written off at the price of scrap metal. As an experienced military man, Lev Rokhlin also warned of the threat of a global catastrophe of the entire Caspian basin if Armenia, using weapons illegally obtained from the Russian Federation, destroys the dam of the Mingachevir hydroelectric station. And in fact, Vagarshak Harutyunyan confirmed that the leadership of Armenia has such crazy and hateful plans.

Recall that the Mengechavir hydroelectric station has a dam with a height of more than 80 meters behind which there is a huge Mingachevsky reservoir, in which over 16 square kilometers of water are concentrated. If the dam is destroyed, a wave almost 80 meters high can rush down the Kura River to the side of the Caspian Sea, spreading across the plain and demolishing all the cities and villages on its way. The unpredictable consequences of such a catastrophe in the entire basin of the Caspian Sea are also possible. And the former Minister of Defense of Armenia does not even hide such cannibalistic plans.

But if the regime in Yerevan threatens to organize a flood of catastrophic proportions and destroy millions of civilians, then it’s possible that this is not all the “preparations” for the maniacs who have completely lost any human principles. It is quite possible that they also have plans to detonate dirty bombs using radioactive waste from the Metsamor NPP for their production. It is impossible to exclude the existence of plans to undermine the NPP itself if Yerevan "strategists" consider that the wind will carry the radioactive cloud to neighboring countries.

At a time when the international community is joining forces in the fight against the coronavirus epidemic, joining efforts to prevent the danger of military, environmental, climatic, or man-made disasters that may come from such regimes as the authorities of the Republic of Armenia is extremely urgent.

First of all, the Metsamor NPP should be urgently decommissioned and placed under international control. It is impossible to leave such an object dangerous for all mankind at the disposal of the state authorities, which does not even hide plans for organizing disasters on a global scale.