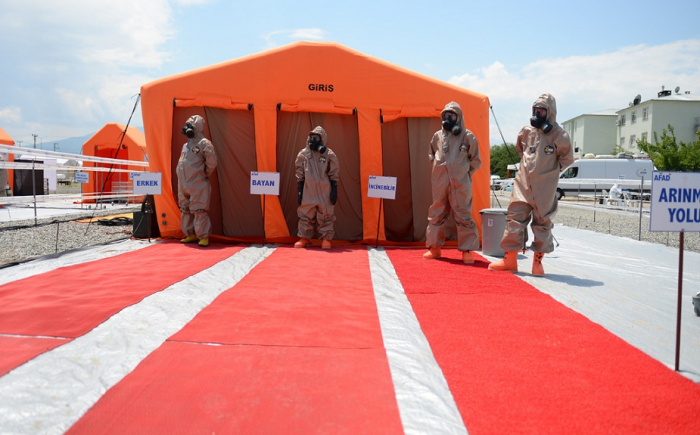 In the Turkish province of Igdir, large-scale drills were held to protect against the consequences of a possible accident at the Metsamor nuclear power plant in Armenia. As part of the exercise, the actions of the ambulance teams, the National Medical Rescue Team and the gendarmerie to protect the inhabitants of eight border Turkish villages from a possible chemical, biological and radiation threat were worked out, according to the Turkish news agency Anadolu.

As it is known from the present capital of the Republic of Armenia and other cities of the Ararat valley, the highest peak of Turkey - Agrydag (Ararat) is clearly visible. But also from the Turkish side, especially from the Ararat foothills, “in full view” one can see both Yerevan and Metsamor, where the most dangerous facility of the South Caucasus is located - the Armenian or Metsamor nuclear power plant.

Seismic stations located in the east of Turkey constantly record earthquakes of different forces. Their epicenters are located both in Turkey and in Armenia, including to the south of Mount Aragats, just where Metsamor NPP is located. Metsamor is located in the crustal zone between the two extinct volcanoes Alagez (Aragats) and Agrydag (Ararat), where at any moment here you can expect the most devastating earthquake.

Located near the border with Turkey, the Metsamor nuclear power plant in Armenia is considered one of the most dangerous nuclear energy facilities in the world.

Recall that the Metsamor NPP was built in 1970. It was already closed once - after the Spitak earthquake in 1988, when all the station personnel literally fled from their workplaces, and there was a threat of reactor overheating. To prevent the accident at the station, the leadership of the USSR was forced to immediately transfer personnel from other NPPs of the Soviet Union there. Then the tragedy was avoided.

In 1995, the operation of the station was resumed and even the second reactor was launched. Moreover, the term of exploitation of this station, in regulatory documents, has long been exhausted. However, Armenia is not in a hurry to close the station and even intends to continue to sell electricity produced at nuclear power plants to other countries in the long term. Neighboring countries seriously fear that a powerful earthquake in such an earthquake-prone region may occur again.

Whether the NPP will withstand a catastrophe and whether the entire station staff will not run away, as it was the last time, is a big question.

But even without an earthquake, the nuclear power plant, which has been in operation for almost 50 years, is in itself an extremely dangerous object. Moreover, it is exploited in the conditions of Armenia, when all state finances are directed to military needs, moreover, in conditions of terrible corruption. There were not and there are not enough qualified specialists at the Armenian NPP, funding is not allocated to carry out the necessary repairs and safety measures.

Emergencies at this extremely outdated power station are harder to hide. And, the farther, the more threats that it is already difficult to maintain the work “in a normal mode” at a nuclear power plant, there is a chronically “pre-emergency situation” there.

Therefore, in Turkey they are forced to start working out measures to protect against a possible accident at a nuclear power plant in Armenia. But these measures, which are possible and will be able to minimize the consequences of the catastrophe for the residents of Turkey, alas, will not help the population of the same Armenia.

The enmity with Turkey is the basis of the Armenian nationalist ideology, so even in the event of an accident at a nuclear power plant, Armenia is unlikely to let Turkish rescuers enter its territory. Armenia has not had its own strength to fight the catastrophe. And the state of Armenia itself, with its aggressive policy, support of separatism, ethnic cleansing and occupation of foreign territories, even without an accident at the nuclear power plant turned into a Catastrophe, both for the Armenian people (who are dying and running away from their state) and for their neighbors.