Claims for Orthodox churches in Tbilisi - why did they become more active? 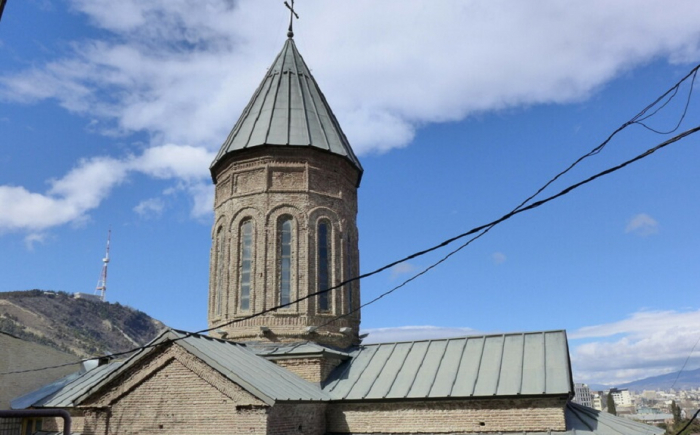 Recently, photographs and stories about allegedly “Armenian churches” of Tbilisi have been actively distributed among Armenians in both Armenia and Georgia. One gets the impression that in general the whole of old Tbilisi is exclusively an “Armenian city”.

In total, Armenian nationalists claim in Tbilisi dozens of Georgian churches, including those that go to a mass of Orthodox parishioners and Orthodox services (a list of 28 churches in Tbilisi, which are ranked as "Armenian" at the end of the article).

It becomes clear why the Armenian fifth column so wanted to close the Orthodox churches on Easter. After all, then it would be possible to seal the churches altogether by filing lawsuits in various international instances as “Armenian” and securing their transfer to the Armenian community.

At the same time, Armenian nationalists are absolutely not worried by the fact that the religiosity of ethnic Armenians, including in Tbilisi, is much lower than the religiosity of Georgians. Even on major holidays, the existing Armenian churches in Tbilisi are half-empty, while in Georgian churches, for which the nationalists are claiming a mass of parishioners. That is, it is important for Armenian nationalists to take away someone else’s, appropriate it and let it stand empty.

The question arises: why did the Armenian nationalists just now take up a reminder of the "Armenian churches of Tbilisi", and in fact for attempts to appropriate the Georgian churches?

The fact is that the coronavirus epidemic will someday end. Tourist trips will resume, including to the South Caucasus. Naturally, Armenian falsifiers are trying their best to present themselves and their Republic of Armenia as "the oldest and unique Christian country."

But there are problems. Tourists come to Yerevan, listen to Armenian tales about the alleged “2800th anniversary” of their capital, but do not find the ancient Armenian churches in the city at best. And this is not surprising since present-day Yerevan was built on the site of the previously destroyed ancient Azerbaijani city of Iravan.

Churches and monasteries on the territory of the Republic of Armenia are “scattered”, they are mainly Armenian remodels, and churches with the age of more than 100-150 years are Georgian or Albanian and even Kipchak churches. It is simply impossible to find at least one city where there would be a significant concentration of ancient Armenian churches.

In the north and northeast of the Republic of Armenia, most of the ancient churches are Georgian churches appropriated by Armenian falsifiers. In other regions of the country - Albanian.

Therefore, the question arises among foreigners: "If you are Armenians such a" unique ancient Christian people "with such a culture, show us at least one city with ancient Armenian churches?"

For example, the fact that Moscow is a Russian city is not in doubt. Given the huge number of Russian Orthodox churches that concentrate on the relatively small territory of the ancient Russian city.

Also, no one has a question that Tbilisi is the primordially Georgian capital, given the huge number of Georgian Orthodox churches.

But Armenia has no such thing. In Yerevan, some remodels, built mainly after the collapse of the USSR. Echmiadzin, handed over to the Armenian Catholics during the time of the Azerbaijani state Kara-Koyonlu, the Turkic-Albanian village of Uchkilisa, can be considered a stretch. But it was always a spiritual center, but not a city in the usual sense of the word.

Therefore, the Armenian falsifiers are trying to "untwist" precisely Tbilisi as the "Armenian city". And for this, they need to appropriate most of the Georgian churches of Tbilisi.

The danger to Georgia in the current claims of Armenian nationalists to Georgian churches is enormous. Moreover, in one of these churches in Tbilisi on Agmashenebeli Avenue, Armenian circles have already initiated proceedings in state institutions and litigation, trying to take this church to their hands. If you do not continue to pay attention to the Armenian claims to the Georgian churches, then the process of seizing Georgian shrines can sharply intensify and become uncontrollable.

10. “Aranz Vank” (Pasha Vank, Vank Mair Tachar) basilica, 931, restored 1430.1715, 1800, was destroyed in 1937, the Armenian cemetery, the burial of Mantashev, a chapel, a museum, all graves were also destroyed and family graves, the entire complex and stones from it were used in another construction. Only the bell tower with the watchman's house remained, which became part of the facade. At this place, secondary school number 104 was built. Atoneli Street No. 3, the area of Kolmeurneoba Square.

13. Kukiya. “Surb Astvatsatsin”, 1789 destroyed in 1930, David Agmashenebeli Avenue (in place of the Republican House of Models)

15. Kamoyants “Surb Gevorg” in 1778, restored in 1804, destroyed in the 1930s, Rustaveli Avenue (opposite the metro station “Tavisuplebis Moedani” (“Freedom Square”)), now there is a residential building on this place

17. Khreshtakapetats (Bird Pork Ekegets) 8th century, restored in 1480, 1893, destroyed in 1939, in its place was built the Georgian church, Samgebro street

18. Hodgiswank “Surb Astvatsatsin” (cemetery) 1650/55, restored in 1835, was destroyed in 1930 along with the cemetery, a park was built on this site, the Holy Trinity Cathedral (Sameba) is now built

19. Dzorabashi “Surb Gevorg” (basilica), 1600, restored in 1880, was destroyed in January 1995, in its place was built the Georgian Church of the Prophet David, Dzhorbanidze Street No. 1 (Avlabari)

21. Metekhi, the Surb Vardan church was restored in 1893 by Fridonyan, was destroyed in the 1940s, the territory of the Metekhi fortress was destroyed

22. Tandoyants “Surb Astvatsatsin” (basilica) in 1790, restored in the 1890s, in Soviet times, the building was converted into the “Kolkheti” cinema, today it is half destroyed. David Agmashenebeli Avenue No. 40 (38)

The list was compiled by Armenian nationalist falsifiers from the Armenian Apostolic Church with Armenian names.