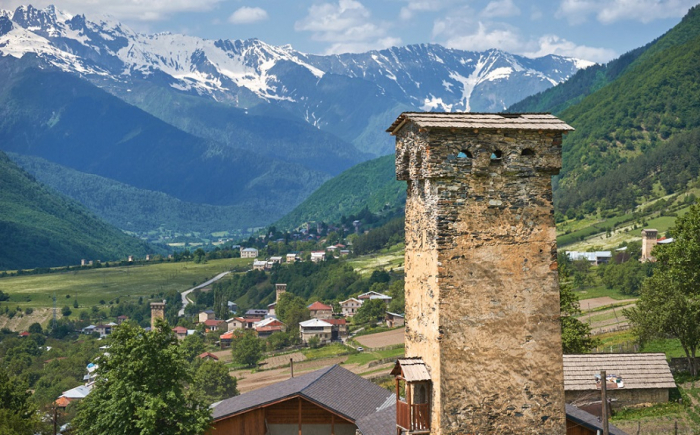 Recall that the most fierce resistance to the separatists and invaders during the 1992-1993 war was provided by the Svan Georgians of the Kodori Gorge. About the Svan militia "broke teeth" the vaunted Armenian battalion named after Baghramyan, who suffered huge losses, but could not advance deeper into the Kodori Gorge above the village of Lata. And until August 2008, the Kodori Gorge, inhabited by the Svans, remained the only unoccupied honor of Abkhazia.

In August 2008, the forces were already too unequal. Small and poorly armed units of the Georgian army and the Svan militia could not contain the pressure of the Russian military machine, which hit the gorge with tanks, aircraft, and elite air assault groups. A massive ethnic cleansing was carried out by the Russian army and separatists in the Kodori Valley, most of the Svans were expelled. Of the 5 thousand Svans who lived in the gorge before the occupation, less than 100 people remained, mostly the elderly, who are now in the ghetto. Without a special permit, they are not even allowed to go down to the lower part of the Kodori Gorge.

Armenian and Abkhaz nationalists hate Svans. Therefore, they do not miss the chance to hostile the population of the separatist territory for any reason against this distinctive part of the Georgian people. And one dramatic case of the current coronavirus epidemic gave rise to a new round of anti-Svan and generally anti-Georgian hysteria in separatist Abkhazia.

It all started with the fact that Nino Khetsuriani, a native of the village of Aberkiti in the Gali district, arrived from Moscow on March 29 at Ural Airlines flight U6 407 in Sochi. On the same day, she crossed the border and through entire occupied Abkhazia went to Gali.

At home, the woman became ill, she went to a local hospital. Doctors who (as elsewhere in separatist Abkhazia) have no conditions for treating more or less serious diseases decided to transfer her to Zugdidi through the demarcation line. On the demarcation line, the patient was met by an infectious gang, and already in the Zugdidi hospital, she was diagnosed with coronavirus.

If the patient had an Armenian or "typically Abkhazian" surname ending in "ba", then this would hardly have a great resonance. But the name of the woman is Svan, Khetsuriani. And the provocateurs immediately reminded the Abkhaz in social networks, "how bad svans are". Svan and Georgians began to be accused of almost conscious "biological sabotage" against the "freedom-loving" separatist Abkhazia. There were calls to organize a new ethnic cleansing and expel from the separatist territory, without exception, all Georgian Svans, and at the same time Georgian Mingrelians from the Gali district.

All this provocative xenophobic “wave” in separatist social networks speaks about one thing, those who have “laid eyes” on the lands of Abkhazia intend to complete the process of “cleaning” this territory first from the Georgian and then from the Abkhaz population. And the few Svans remaining in Abkhazia may well be the first victims of these plans. Indeed, in the “Lower Zone” of the Kodori River Valley, in the foothills and plains of the Gulripsh and Ochamchir regions, ethnic Armenians have long and absolutely dominated the population. Here, in essence, there was a continuous strip of Armenian settlement.

The very fact that in the upper Kodori Gorge several families of Georgian Svans live in absolutely disempowered positions, and to the east, in the Gali district there are ghettos, where the same lawless Georgians-Mingrelians live, and it does not give the nationalists “ancient long-suffering people” peace. They are ready to use any provocation to organize a new genocide and a new ethnic cleansing of the Georgian population.