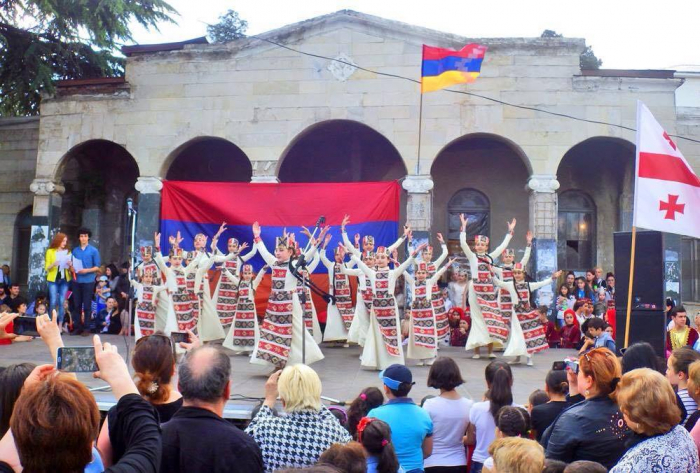 One can read thousands of publications, both print and on the Internet, watch hundreds of videos prepared by Armenian nationalists or their mercenaries in other countries, but not meet a single good word about Georgia or Georgians in them. This is especially true of Russian-language materials concocted by representatives of the "ancient cultural people" or by their order.

The Russians are told what “bad” Georgians are, and how they owe everything to the “ancient and cultural Armenians,” whom you see dare not to obey. The fact that Georgians are “nationalists”, “chauvinists”, and “fascists” write in almost every material in Russian on Georgian topics (although it would seem who could blame others for “fascism” if not to the admirers of the Nazi Garegin Nzhdeh).

And so, a certain “Association of Armenians of Russia” posted on Yandex Zen the slanderous material of Arthur Akopyan “Armenophobia in Georgia” (https://zen.yandex.ru/media/oar/armianofobiia-v-gruzii-5db01e228600e100b133c899?utm_source=serpIWqqbqqbbclfd -KAnXYdXrbmm8cB1yBTfN-HpWop66xnQJP1vI) dedicated to the relationship between Georgians and Armenians on Georgian land, in which the author sincerely wonders why the "ungrateful" Georgians do not exalt enthusiasm for the "ancient cultural people" who settled on their land.

Here are excerpts from this material:

“Conflicts between Armenians and Georgians were frequent. But it’s worth saying right away that there was no real ethnic conflict between the two neighboring peoples. It was not a confrontation between nations, but rather political disputes, such as a split in 607. ”

Here from the very beginning - a lie. In 607 there was no “political debate” at all, but a split in the most important thing - in the matter of religion. The Armenian Church went into the Monophysite heresy, the Georgian Church remained faithful to Orthodoxy. Since then, Georgians and Armenians are not co-religionists.

We also remind Mr. Akopyan that since the Georgians recognized the decree of the Council of Chalcedon, the Armenians, persisting in the nonphysical heresy, convened a special cathedral in Dvin, by virtue of the decree of which their patriarch Abraham pronounced such a written curse on the Georgians: “We cursed and cast down the prostitute of the Georgian Catholicos Kirion, and with respect to the Georgians, we command that the Armenians from this day have no communication with them - neither in prayer, nor in eating and drinking, nor in friendship, nor in raising children; may none of the Armenians dare to go to either Mtskheta or Manglisi to worship the glorious cross, let them (Georgians) not visit our churches, avoid entering into marriage with them. It is only permitted to have trade relations with them, as with the Jews. Whoever violates this decree, be damned by the body, soul and his whole life.”
It turns out the Armenian heretical church cursed the Georgians (and not vice versa). So before accusing the Georgians of “Armenophobia”, for which there is not a single supporting document, let us recall this act of egregious Georgianophobia.

The Armenian Church, moreover, tricked the independent Albanian Church into the Monophysite heresy, destroying the monuments of the Albanian written language, appropriating all the Albanian churches and shrines, and populating the lands where the Albanian Christian population lived with Armenian settlers.
“However, in the 19th century, among the Georgian intelligentsia, sprouts of the Armenian-phobic discourse begin to emerge and we need to understand the reasons for this phenomenon.

There were several reasons for the emergence of Armenianophobia. In many ways, this is due to the development of bourgeois relations and the decline of the power of aristocrats. There were still noble families in Georgia and they resisted the new bourgeois processes. Armenians occupied an important position in the commercial and business activities of Georgia. In the 19th century, Armenians were the majority in Tbilisi and owned most of the shops. The Armenian bourgeois was perceived as enemies not only of the Georgian aristocracy but also as enemies of the aristocracy as such.

The situation worsened after the reform of the Tbilisi city government in 1870. Under the new reform, the property qualification was approved for elections to the city duma. As a result, the Armenians became an absolute majority in the elections of almost all convocations. They also became mayors of the city. “Only once did the Armenian not be elected mayor, losing by one vote: and then that relative was from his relative.”

Further, Arthur Akopyan is indignant as to why the Georgians treated the Armenian settlers without great enthusiasm:

Akopyan admits that in the 19th century, Georgians ceased to be masters in their own land, all were captured by Armenians. In Tbilisi, the Georgians could not even elect their mayor, because they were poor in comparison with the Armenian bigwigs and "did not pass the property qualification." Armenians, in fact, made Tbilisi an “Armenian” cunning, deceit and with the connivance of the Russian administration. And now at every step they shout that "the Armenians built Tbilisi." But they were built not for Georgians, but for themselves!

Armenian immigrants captured not only the reins of government in Tbilisi, not only trade and industry but also the best lands and hundreds of Georgian churches, converting them into “Armenian” ones. Those whom Georgians only recently remembered as miserable refugees, who trembled before any armed Kurd, became "masters of the situation." And in their impudence and disregard for the shrines of the Georgians, in the economic enslavement of the population, they surpassed all the other conquerors that the Georgians faced in previous centuries. They will surpass they must be said, running ahead of the conquerors of the past and in cruelty, but this will already be in Abkhazia in 1992-1993.

Further, Arthur Akopyan quite correctly notes that “... Armenians were perceived as some exploiters who enslaved the peoples of the Caucasus ...”. then he has simultaneously with the Georgians, the Russians and Russia are to blame. Those. peoples who saved Armenians as an ethnic group and gave them unthinkable opportunities:

“The Armenian workers were even more afraid. Their revolts inspired the Georgian proletariat and further weakened the power of aristocrats. The very idea of making Armenians corrupt by the bourgeois was not originally from Georgia; it originated in the Russian environment. The Russian authorities also did not like the growing influence of the Armenians and it was decided to weaken their influence through Armenian-phobic theses in newspapers.
The notorious Kavkaz newspaper, edited by the anti-Semite and the Armenianophobic Velichko, published evidence that the Armenians allegedly want to "restore Great Armenia to Rostov." Representatives of the Georgian intelligentsia picked up these theses, in particular, Ilia Chavchavadze.”

And he does not specify what such theses were "picked up" by Ilia Chavchavadze, and what angered him in the actions of the Armenian nationalists. Meanwhile, this is well known from the work of Ilia Chavchavadze, “Armenian Scientists and Glaring Stones,” where he raised the theme of not only falsification of history, but also the appropriation of Georgian churches by Armenian immigrants. And the fact that the Armenians buying the land on which the ancient Georgian churches were located destroyed the Georgian inscriptions and frescoes and inserted instead of them Armenian falsified inscriptions, a lot. Georgians knew all this very well, the capture of their shrines took place literally before their eyes, but they could not do anything. Armenians had money and influence.

We remind Mr. Akopyan that for centuries Georgians have defended their faith, their churches with weapons in their hands. And how should the Georgians relate to the fact that the temple for which his grandfathers and great-grandfathers shed blood, which the powerful conquerors could not capture, was captured by cunning Armenian immigrants? Moreover, they not only captured but also dragged stones with their inscriptions, inserted them, having thrown away the Georgian ones and brazenly announced that the church was “always Armenian”.

The Georgian people, who have defended their faith and their temples for centuries, figuratively spit in the soul. It was possible to endure both economic humiliation and the purchase by the Armenians of Georgian lands and the authorities of the Armenians in Georgian cities, but such humiliation and abuse of the shrines was unthinkable for the Georgians. It is even surprising that the Georgians endured it. Akopyan himself admits that "direct ethnic clashes did not come to the end."

In conclusion, Arthur Akopyan writes: “Here, in Georgia, Armenian-phobia spread through separate “figures”, while the masses were not so affected. And all conflicts with the Armenians were in the political and territorial field but did not develop into full-fledged chauvinism and racism. However, this does not remove the conflict situations and they nevertheless escalated into wars, like the Armenian-Georgian one in 1918, and even now it is not known how the relations between the two neighboring nations will develop further. One thing is for sure, that Georgians need to finally get rid of the Armenian-Phobic discourse, which sometimes, but still penetrates into modern relations. Otherwise, real partnerships cannot be set up.”

But chauvinism and racism are just today being experienced by Georgians by Armenian nationalists, who not only impede the return of Georgian refugees to Abkhazia (whose homes and apartments were seized by Armenian militants) but have achieved the deprivation of the elementary human rights of the Gali district Georgians by the puppet separatist regime. And what kind of “partnerships” can there be between Georgian refugees who have lost relatives and friends in Abkhazia, and killers and looters from the battalion named after him? Baghramyan? What “relations” can there be with Armenian nationalists who, in fact, have taken over Georgian Abkhazia and are already buried in other Georgian lands?