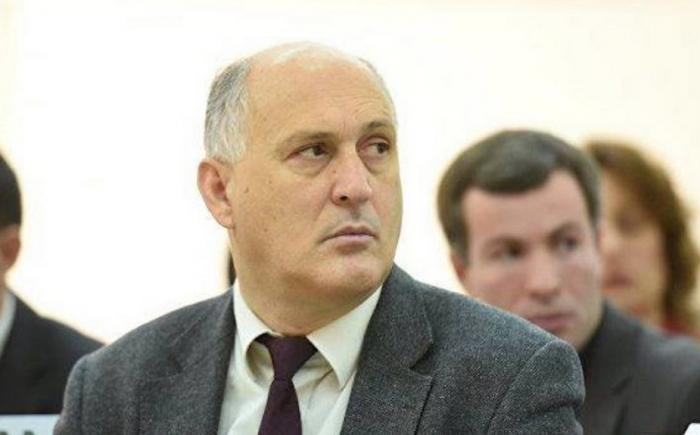 “Caucasus Plus” recently wrote about the catastrophic state of the Abkhaz language, which is threatened in the near future by the complete disappearance, as well as the Abkhaz ethnic group. In the article "The Abkhaz language will die out in 20 years, much faster than it was supposed a year ago" (http://kavkazplus.com/news.php?id=26981#.XdjOh9UzbIU). We also wrote about the defender of Abkhazian identity Vyacheslav Chirikba, whose soul hurts for his people.

It is surprising that only Vyacheslav Chirikba was the only real defender of the mother tongue from separatist figures. This is a philologist, patriot of Abkhazia and his people, a man known outside of Georgia and Abkhazia in particular in Europe.

Unlike the deep mediocrity, separatist leaders such as Raul Khadzhimba and his comrades-in-arms, who are capable of nothing but looting and “cutting” Russian aid, Vyacheslav Chirikba is truly an honored scientist and intellectual.

Perhaps it was European fame Vyacheslav Chirikba that influenced the fact that he was appointed the separatist foreign minister in 2011. At the same time, Chirikba differs from other leaders of the separatist regime - he not only did not participate in the separatist war in 1992-1993 and did not stain himself with looting, but also due to the absence of wild Georgianophobia similar to other separatist leaders.

The fact that Vyacheslav Chirikba hurts his soul for the Abkhaz people and the Abkhaz language and his unwillingness to emphasize hostility towards Georgia at every step did not like the Armenian lobby, which oversees the regime in Sukhumi. Vyacheslav Chirikba, when he was the head of the separatist Foreign Ministry, did not pay as much as "necessary" attention to the Armenian masters appointed by "older brothers".

In fact, Chirikba did not want to become “restricted to travel abroad to Europe” and to be an “errand boy” with the Armenian “masters”. Indeed, otherwise he would only have the opportunity to illegally travel to occupied Azerbaijani Karabakh, as well as receive “Artsakh” delegations in order to begin to slowly transfer to them the Abkhaz lands they had their eyes on.

The dismissal of Vyacheslav Chirikba from the post of “minister” in 2016 apparently did not upset him very much. The patriot of Abkhazia had more time to engage in the main business of his life - preserving the Abkhaz language. And in this case, the situation, the farther, the more catastrophic.

The Abkhazians ceased to speak their native language, and this is no coincidence, given that they have become a minority in their land. After all, Armenians dominate everywhere. The whole economy is in their hands. To communicate with Armenians, you need to know either Armenian or Russian. As a result, all the youth of the Abkhaz today switched to Russian, have almost forgotten their native language, and the children simply do not know it.

This is quite suitable for Armenian nationalists. They benefit from demoralized Abkhazians who have forgotten their roots. Forgetting their own national pride and dignity, completely obedient to Armenian “puppeteers”. But Vyacheslav Chirikba did not calm down, he beat the alarm, he tried to do everything for the separatist authorities to somehow support the Abkhaz language.

This activity of the Abkhaz patriot did not like the Armenian masters at all, who did not need to save the Abkhaz language and people, but needed permission to sell land and real estate to the Armenians from Russia, Armenia and Azerbaijani Karabakh occupied by the Yerevan regime. Therefore, in relation to Vyacheslav Chirikba, almost undisguised persecution was conducted.

And recently it became known that Vyacheslav Chirikba will no longer be able to give lectures at the Abkhaz State University. The last patriot of Abkhazia was “thrown out” of the main separatist university. Apparently under pressure from the “brothers of Armenians”. And this is symbolic.

Against the backdrop of simply stunned by corruption and wild money that comes from cutting Russian aid of Abkhaz separatist officials, Vyacheslav Chirikba was one of the few honest Abkhazians who practically lived on one salary. And very small one. Right now, this salary will not be either. Like no one will defend the Abkhaz language in the separatist Abkhazia, which will degrade and disappear even faster.

Vyacheslav Chirikba, as he could, fought for his native language. Now, with the filing of the Armenian masters of the separatist Abkhazia, he was persecuted and fired from his job. There is no doubt that he will not be allowed to live in his native Abkhazia. Vyacheslav Chirikba will have to go to Europe and live there as a teacher.

Apparently, Vyacheslav Chirikba is deliberately “pushed” by the separatist authorities and their Armenian “patrons”. Abkhazian patriots who seek to save the Abkhazian people enslaved by Armenian nationalists and do not need them in separatist Abkhazia.