Yegor Gaidar the destroyer of Russia, the executioner of Abkhazia and Karabakh 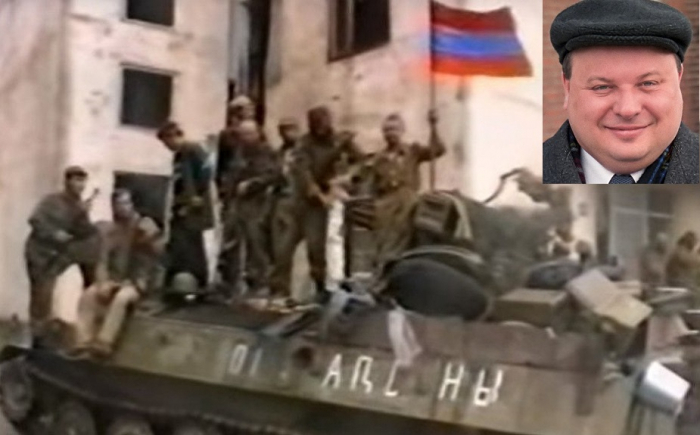 In the recent history of Russia, there is no character more hated by the Russian people than Yegor Gaidar. The mass impoverishment of the population in the early 90s, hyperinflation, the collapse of industry, predatory privatization, the formation of a class of oligarchs, the criminalization of society in Russia - all on his conscience.

However, few people know that this figure also played a tragic role in the history of the Georgian and Azerbaijani people. It was with his submission that Russia, which was being ruined by him, or rather its treacherous elite, began to help the Abkhaz separatists and Armenian nationalists. Largely on his conscience, thousands of dead civilians of Abkhazia and Karabakh, as well as the mass expulsion of the Georgian population of Abkhazia and the Azerbaijani population of Karabakh from their native land.

Moreover, in Armenia, those who remember what services Yegor Gaidar provided during the aggression against Azerbaijan to the Armenian occupiers are ready to erect a monument to him.

“For example, when in the summer of 1992 we were defeated, there was no way out, the enemy entered Gandzasar, everything collapsed, I was not yet the prime minister and it seems that there was already a decision that they (Azerbaijanis) would enter Stepanakert and then sit down let's talk. Azerbaijanis had air forces, but we didn’t. Later, in 1993, when I became the prime minister, we created effective air defense for two weeks. It was necessary to fight against this air force, and we got the opportunity to conduct an air battle in the Martakert region. I don’t want to talk anymore. One of the best streets of this city should be named after Gaidar in Stepanakert too. I hope this is sure to happen. If there were no Gaidar, there would be no Karabakh, ”Hrant Bagratyan said.

The ex-prime minister of Armenia noted that with the support of Yegor Gaidar, he was able to restore balance on the battlefield, gave a chance to fight and win, therefore, the leadership of Armenia and the separatist “Artsakh” should do everything to preserve the bright memory of Gaidar.

Of course, Yegor Gaidar helped not only Armenia. Armenian nationalists as part of the Baghramyan battalion and other formations fought in 1992-1993 and on another front - in Abkhazia. And here, with the filing of the same Gaidar, as well as corrupt Russian generals, the Russian army was used to destroy the Georgian population. And in many ways, it was Yegor Gaidar who helped the Armenian nationalists by carrying out the genocide of the Georgian population to get the “most valuable trophy” - Abkhazia. In which, at the moment, the Armenian community has already become full "masters."

The question is why Yegor Gaidar, who did not seem to have a direct relationship with the Armenian ethnic group, helped the Armenian nationalists in this way. The answer is simple, Yegor Gaidar owes his dizzying career primarily to the Armenian lobby. Namely, Abel Aganbegyan, one of the main "instigators" of the Karabakh conflict in Soviet times.

It was Abel Aganbegyan who was one of the main destroyers of the USSR and the main "Arsonist" of Karabakh. On November 16, 1987, Aganbegyan, as Gorbachev’s leading economic adviser, met with a group of French Armenians at the Intercontinental Hotel in Paris and offered them the capture of Karabakh: “I would be happy if Nagorno-Karabakh was returned to Armenia. As an economist, I consider "they have much closer ties with Armenia than with Azerbaijan. I have already made a similar proposal, and I hope that these ideas will be implemented in the spirit of “perestroika” and democracy."
This is where the Karabakh conflict began. At the same time, Agangebyan was working hard to destroy the superpower — the USSR — by carrying out murderous liberal economic reforms in it. and for this, he put forward in the first roles one of his so-called “errand boys” —Egor Gaidar.

At the end of 1990, at the suggestion of Academician Abel Aganbegyan, Yegor Gaidar created and headed the Institute for Economic Policy of the USSR Academy of National Economy. From this moment began the rapid rise of Yegor Gaidar. At the same time, as can be seen from the subsequent events, Aganbegyan and the Armenian lobby did not lose control over their “nominee”.

As a result, in 1992-1993 he held the post of first acting Chairman of the Government of the Russian Federation, and then the first Deputy Chairman of the Government, "fulfilled" his high appointment before the Armenian lobby. Both in Russia itself (during the privatization, the Armenian nouveau riche was enriched fabulously), and in the South Caucasus helping Armenian nationalists to take over the lands of Karabakh and Abkhazia.

It is strange that among Russian patriots everyone hates Yegor Gaidar without exception. But many of them at the same time short-sightedly continue to support separatist projects - Abkhazian and “Artsakh”. Not realizing that these are also projects of Russia's worst enemies, in particular, the same Russian destroyer Yegor Gaidar.