Another triumphant victory of Badagoni In Europe 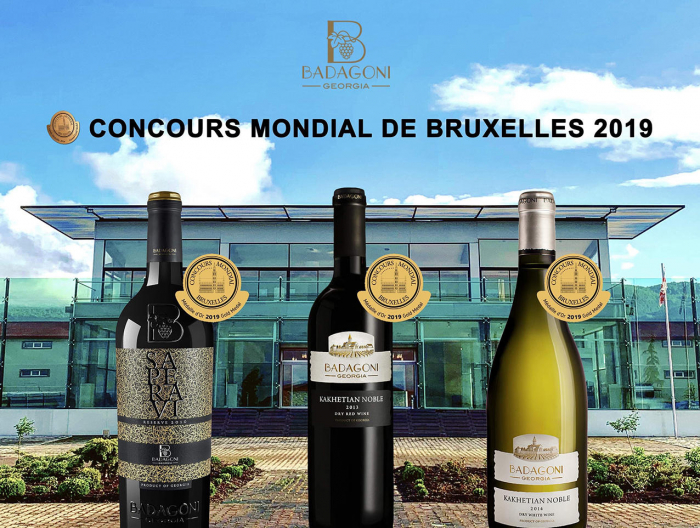 Badagoni, as the leader of the Georgian winemaking industry, continues to conquer triumphant peaks on various international competitions.

This time at one of the most prestigious international wine competition “CONCOURS MONDIAL DE BRUXELLES 2019“ Badagoni received the record number of awards – 3 gold medals!

The award-winning wines are Dry Red “Saperavi Reserve 2010”, Dry Red and Dry White “Kakhetian Noble”. We are proud to say that Badagoni has already received the status of the prominent worldwide wine brand. Within the last 4 years, on 43 different international competitions Badagoni has received 111 medals, half of which are gold medals.

“CONCOURS MONDIAL DE BRUXELLES 2019“ is one of the largest scale competitions - this year the number of participant wines went up to 10,000 wines from 46 countries. The competition boasts with the 25-year experience and the unique 100% objective and strict assessment of wines.

Among the competition jury were worldwide sophisticated enologists, the best wine specialists and critics. The competition is founded in Belgium, but it annually changes its location, this year the competition took part in Switzerland.

All three award-winning wines are created by the main enologists of Badagoni – Dr. Donato Lanati from the best grapes cultivated in the vineyards situated next to Alaverdi Monastery. Dr. Donato Lanati is listed among the Top 5 enologists of the world and he possesses the international winemaking award – Wine Oscar. All three award-winning wines already are worldwide favourites – within the last year “Saperavi Reserve 2010” has received 12 gold medals on various international awards.

Regardless the harsh competition on “CONCOURS MONDIAL DE BRUXELLES 2019“, Badagoni managed to get the best result, which is a huge motivation for the future successes. We congratulate Badagoni and Georgian wine supporters to this victory!