Georgian Churches in Georgia and in Armenia - Part VI 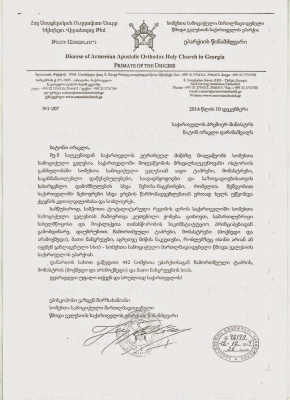 The Letter by Vazgen Mirzakhanyan, Leader of the Diocese of the Armenian Apostolic Church in Georgia, to Irakli Garibashvili, Prime Minister of Georgia, Concerning Handing over of 442 Churches

Father Porphyry, do not trust Armenians documents. They are not trustworthy. They used to make falsified documents, put them somewhere at a remote and dump place in order to let them turn yellow and resemble old documents.

From the letter of Metropolitan Martholomae…

On December 12, 2014, Bishop Vazgen Mirzakhanyan, Leader of the Diocese of the Armenian Church in Georgia, addressed Irakli Garibashvili, Prime Minister of Georgia, with the following letter:

Since the 5th century the Armenian Apostolic Church operates on the blessed land of Georgia. For the centuries-long history of its activities in Georgia, the Armenian Apostolic Church built churches, monasteries, educational centers, hospitals, and various other facilities beneficial for society by means of which it facilitated to the country’s well-being and strength together with other peoples.

Unfortunately, under the Soviet totalitarian regime, the Armenian Apostolic Church was deprived its property. We request, in accordance with the constitutional principles of a legal state and of citizens’ equality, to return repossessed churches and monasteries (functional and non-functional), their ruins and the land on which they are or were situated to the ownership of the Georgian Diocese of the Armenian Apostolic Orthodox Holy Church.

By way of an appendix we present a list of 442 churches and monasteries (functional and non- functional), as well as their ruins, which were repossessed from the Armenian diocese.

God bless you and all Georgia!

On December 17, 2014, the Chancellery of the Georgian government sent the letter to the LEPL Agency for religious Affairs, and its copy to the Agency of Culture and Monument Protection of Georgia.

On December 12, 2014, the Armenian Prime Minister Hovik Abrahamyan arrived on an official visit in Georgia and he visited the Armenian culture House (Hyartun) in Avlabari; exactly following that visit (on December 18), the aforementioned letter was sent to Irakli Garibashvili.

It is obvious that the letter was sent after consulting Prime Minister Hovik Abrahamyan and his consent.

Representatives of the Ministry of Culture of Armenia declared that they did not know anything about Bishop Mirzakhanyan’s letter; this can be described as the Georgian proverb goes: “I believe the oath, but the tail (of hen ill-hidden by thieving fox) surprises me.”

There is another noteworthy fact: whenever churches are empty and deserted in Armenia, and there are a single monk and three nuns all over Armenia,[1] the Armenian party wants Georgia to hand them over the ruins of 442 churches (most of the them are ruined).

After the Diocese of the Armenian Apostolic Church in Georgia became a legal entity of public law, Bishop Vazgen Mirzakhanyan, leader of the Diocese, stated in his interview that the next stage would be the issue of returning of deprived Armenian churches in Georgia to the legal owner.

Bughdan Evangulov writes with sadness: “As a supporter for the rapprochement of Armenians and Georgians, my heart is broken when I read the following in a Georgian newspaper: “In a certain village, Armenians embezzled a Georgian church, they erased Georgian inscriptions from certain ruins and made an Armenian one instead;’ and on and on. I don’t know what is goin on? I can’t explain it and, therefore, it is difficult to believe for me. How can I believe it when so many antiquities are not taken care of in Armenia? They are ruined owing to carelessness, they crash, even so far firmly standing churches and monasteries do!.. I don’t know whatis going on? Who cares for antiquities and ruins when, in front of Echmiadzin, thousands of Armenians abandon the native church, the church they secured for one thousand and six hundred years, and they join the Lotharingian confession (Catholicism – B. A.), and, what is more unfortunate, they become enemies of their own nation! (Newspaper Nor-Dar, No 115, 1902).

Following that, may I ask the Armenian public figure the following question: Are there really such gentlemen who witness indifferently how relics of the Armenian past and ruined and how they compatriots change their religion, and meanwhile embezzle others’ (Georgians’) churches?...  And if they exist, how most of the Armenians view their activities?... Only debate articles cannot do much and cannot help achieve our goals. We need to get acquainted with each other, to look into each other’s hearts, and to study each other’s literatures. And when we know each other well, this will show us the way how to behave and how to proceed with our relationships. Without it, we will just scold each other no matter how we shout.”

It would not be bad if S. Karapetyan and scholars like him paid attention to their compatriot Bughdan Evangulov’s commandment to leave Georgian churches and to take care of their own ones in Armenia.

In 2011, during the joint visit of the Catholicos-Patriarch of All Georgia Ilia II and the Catholicos of all Armenians Karekin II to Samtskhe-Javakheti, Karekin II addressed Ilia II and said that they had materials about the so called disputed churches, and, if the Georgian party had data that some of the churches located in Armenia were Georgia, it was possible to talk about their return.

The ambassador believed that activities on the issue in point have been in effect in Armenia for a long period of time. This is well visible based on published pamphlets, books, and also on what the Armenian diocese stated that they studied the National Archives of Armenia and submitted claims to the Government of Georgia.”

I should like to make a following comment on the aforementioned document: That S. Karapetyan regularly publishes books in Armenian and English, conducting a purposeful propaganda and trying to manifest the so called disputed churches as Armenian, is not a news. I criticized and relied to most of his such works which was presented in the initial part of the book.

As for the list of the Armenian Apostolic Cathedrals in Georgia (it should be noted: how can an ordinary church be referred to as a cathedral?) presented by Bishop Mirzakhanyan, as well as S. Karapetyan’s reference, they are compiled in a non-professional manner. It is “a merit” of its compiler or compilers. It is non-professional because only the dates of construction and restoration are ascribed to them; it says nothing about based on which source or ktitoral instruction a date of construction was established, or based on which historical source and archival datum it is Armenian.

It should also be noted that Bishop Mirzakhanyan’s list does not mention Tskhinvali and Abkhazia. By this, they violated the globally recognized territorial integrity of Georgia. It means that, deliberately or not, they recognized the independence of the breakaway territories capriciously proclaimed by Putin. It was unexpected by our neighbor, a friendly country; however, one should not be surprised: recently, a certain Babilov, a so called president of South Ossetia met a speaker of the Parliament of Armenia in Yerevan!...