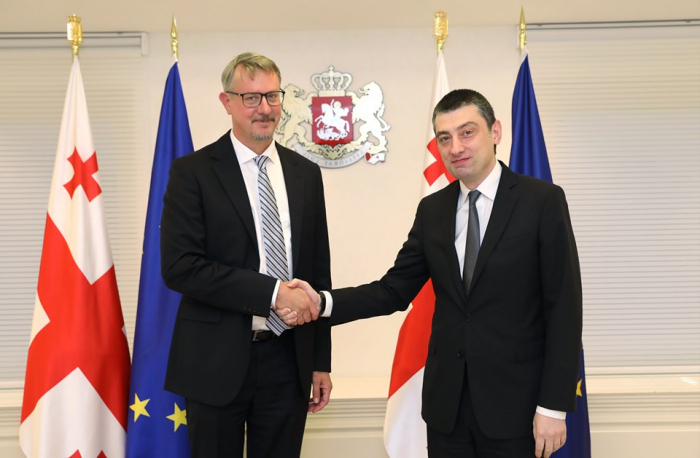 Georgia's new Prime Minister Giorgi Gakharia and Ambassador of the European Union to Georgia Carl Hartzell discussed the process of Georgia’s integration into the EU, the Administration of the Government of Georgia said on Wednesday.

According to them, Carl Hartzell congratulated the Prime Minister on his appointment and wished success in his future endeavors.

Priority directions of bilateral cooperation were discussed at the meeting. The sides underlined the progress achieved within the implementation process of EU-Georgia Association Agreement (AA), along with the Deep and Comprehensive Free Trade Area (DCFTA).

Significance of the high-level format of dialogue with EU was particularly noted in the form of an unprecedented platform created for Georgia. According to the Prime Minister of Georgia, the referred format is a clear message of political support demonstrated by the EU.

At the meeting PM Gakharia noted that the country’s authorities of remain committed towards European values and will continue pursuing efforts towards consolidating democracy and empowering democratic institutions.

The sides focused on the current situation in the region and challenging position in terms of security and humanitarian needs of the occupied territories of Georgia. EU Ambassador expressed concerns about the so called borderization process and obstacles experienced in the free movement of citizens, thereby reaffirming the solid support of the EU towards territorial integrity and sovereignty of Georgia.

Prime Minister of Georgia stressed the role of EU Monitoring Mission (EUMM) in maintaining peace along the occupation line and expressed gratitude towards European partners.