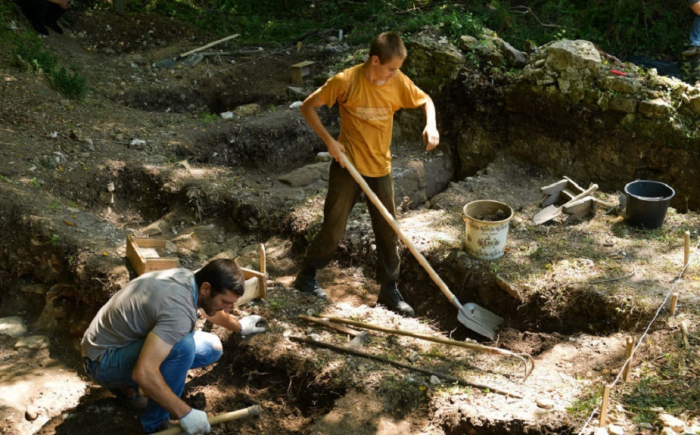 For “archaeologists” and “restorers” in the separatist in Abkhazia, the work is difficult and painstaking. By order of the separatist authorities, all evidence from the Georgian origin of cultural monuments is purposefully destroyed here. In particular, all Georgian inscriptions are deliberately destroyed.

But just the question arises - on what inscriptions to replace them? It’s clear that the “sponsors” of these falsifiers of “archaeologists” and “restorers” have “itchy hands” to take a grinder and, having knocked down the Georgian inscription, write “ancient Armenian” in its place. (About a similar practice, in the story “Armenian history written by the Bulgarian” youtube.com). Also, Armenian "archaeologists" -phalifiers, for example, received monuments of Albanian culture in occupied Azerbaijani Karabakh.

But just in that case, the impudence of the forgers will be too obvious. After all, it is known that before the accession of Abkhazia to Russia, the Armenians did not live here at all and never.

Of course, the easiest way would be to write the Greek "ancient inscriptions." But the fact of the matter is that today Russia is in conflict with part of the Greek clergy representing the Patriarchate of Constantinople, which not only claims to subjugate the Orthodox Church in Ukraine, but also created a schismatic structure (both anti-Georgian and anti-Russian) in the most separatist Abkhazia, the so-called "sacred metropolis of Abkhazia." Those to change the hated Georgian inscriptions into Greek is “politically inexpedient”. And there are very few other ancient written languages.

But here, the “archaeologists” of the falsifiers (and possibly their sponsors) were struck by the “idea”, which fully fit into the political situation, especially after the “independence” of Abkhazia at the request of the Armenian nationalist Lavrov-Kalantarov recognized the regime of Bashar al-Assad in Syria. Aramaic! This language is still spoken in the city of Maalul in Syria. Thus, it is possible at the same time destroying the Georgian heritage to make a "curtsy" in the direction of Assad. In addition, from Aramaic not far from Armenian, after all, Armenians have been living in Syria for a long time.

As a result, recently the separatist media, in particular the “satellite of Abkhazia,” erupted in “sensation” - near the occupied city of Ochamchira, from which the whole Georgian population was expelled, they “found” the Aramaic inscription: “Skakov about the inscription on the Ochamchira discovery: the language spoken by Jesus” (sputnik-abkhazia.ru):

“Abkhazian and Russian scientists during excavations in the vicinity of Ochamchira in early August discovered clay tiles with an inscription in an unknown language.

According to the archaeologist, the brick was made by a local craftsman; he inscribed it on raw clay before burning the brick.

“The inscription says that they knew the Aramaic language, testifies to the wide international relations of Abkhazia at this time, that people, as of now, lived as people of different nationalities. This is quite important, because this is a new word in science,” said Skakov.

Archaeological excavations are carried out jointly by the Institute of Archeology and Oriental Studies of the Russian Academy of Sciences, the Abkhaz State Museum and the Abkhaz Institute for Humanitarian Research”.

Noteworthy is the “new word” in the fraud. Now the "ancient inscriptions" are not knocked out on stones, but painted on raw bricks, which are then burned and passed off as "ancient" ones. It is clear that independent experts will easily prove such a fake. Therefore, it is unlikely that such "sensational finds" of separatist archaeologists will fall into the hands of independent scientists. Most likely, they will be safely stored, as well as, for example, in the completely destroyed Azerbaijani Irevan, the current capital of Armenia, Yerevan, which is stored without giving independent experts explicitly falsified "ancient cuneiform tablets" about the foundation of "Erebuni".

Well, most likely, after the Aramaic "ancient inscription" in separatist Abkhazia, there is very little left to wait until the appearance of a new "sensational find", this time the "ancient Armenian inscription".