Margarita Simonyan will become a separatist in her old age and will kill Russians? 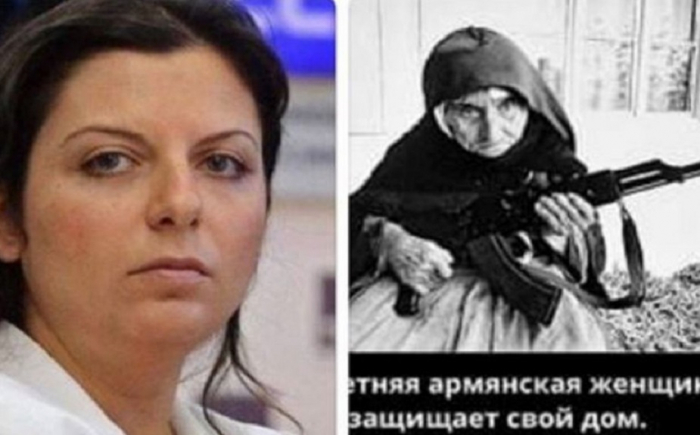 The editor-in-chief of RT and Sputnik Margarita Simonyan posted on Instagram an interesting photo that depicts a 106-year-old Armenian grandmother with a gun. The photo was taken in 1990 in Karabakh. This is an Armenian separatist grandmother who, on the basis of nationalism, is ready to kill the neighbors of Azerbaijanis, with whom she has lived all her life, sharing both joys and grief.

Margarita Simonyan continues the murderous propaganda of separatism for the interests of Russia itself.

The signature that Simonyan left under the photo is noteworthy.

“I don’t need your facesapps, because I already know that in my old age I will look like this,” wrote the current Kremlin propagandist. Without specifying details against whom she will pick up the machine. But at the same time, users understood that she, like this Armenian grandmother, was ready to protect “her home” from machine guns from enemies.

And short-sighted enthusiastic comments appeared in the Russian media like this: "Grandmother with a gun - RT editor-in-chief spoke about her ideal" (rossaprimavera.ru)

But who will be the enimies for the old Margarita Simonyan, unfortunately, the majority of Russians did not understand. But they will be her enemies - the Russians.

Margarita Simonyan was born on the territory of the Russian Federation, in Krasnodar, where, like in Azerbaijani Karabakh and neighboring Georgian Abkhazia, the Armenians are immigrants and live on foreign land among the peoples who sheltered them.

The “long-suffering" Armenians have already “repaid” Azerbaijanis and Georgians for hospitality, having launched separatist wars and expelled more than 1 million Azerbaijanis from Karabakh and more than 300 thousand Georgians from Abkhazia from their homes. Moreover, Abkhazia despite fake "independence" in fact today belongs to the Armenians and they make up the largest ethnic group here.

The conclusion suggests itself: if Margarita Simonyan sees as an “ideal” in old age a grandmother drugged by separatists, ready to kill Azerbaijan’s neighbors, since she considers Azerbaijani Karabakh as “her”, would Simonyan herself also kill Russian neighbors? Since the fact that the Krasnodar Territory becomes "Armenian" is already visible to the naked eye.

Armenians seized all positions in the local economy; their number and share in the population of the Krasnodar Territory are growing rapidly. Russians, under the rule of the Armenian lobby, are already turning into “second-class” people. But in principle, in the Nagorno-Karabakh Autonomous Region of Azerbaijan, the indigenous population of ethnic Azerbaijanis, in fact, did not have any rights in comparison with the Armenians. But this did not seem enough to the Armenian nationalists. They decided to destroy and expel the Azerbaijanis to the last man and, with the help of Russia, carried out this “program”.

And now separatism is returning “boomerang” against Russia itself, in which there are a lot of autonomies. Plus territories that are already considered to be their "long-suffering brothers." Therefore, it is strange to see the comments of some dim-witted Russians in the post of Margarita Simonyan. Such as, for example, velichko.raisa: “Margarita! I’ll stand by your side! ”

Naive Raisa Velichko (possibly from the Kuban Cossacks) does not understand that next to her "she will not get up, but lie down." That grandmothers like Margarita Simonyan, who are obsessed with nationalism and separatism, will kill her and her loved ones. Just like the same militants, drugged by nationalism and separatism, the Armenian militants killed their neighbors Azerbaijanis and Georgians.