The United States is dragged into Armenian territorial claims against Georgia 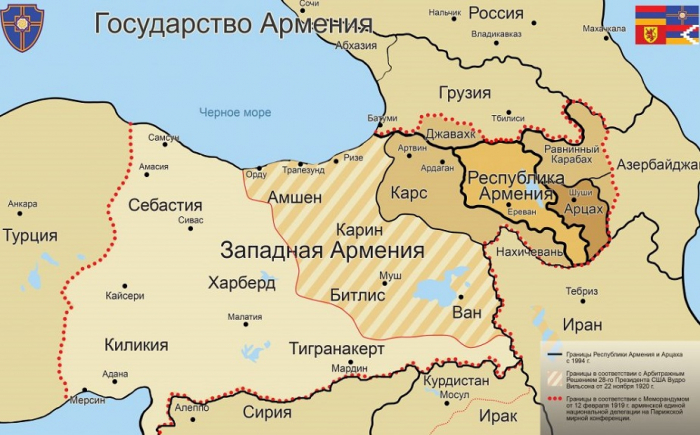 Despite the fact that the US is considered an ally of Georgia, there is in fact no "pro-Georgian lobby" in the US as such. In any case, the capabilities of those who in any way try to defend Georgian interests in the world's leading superpower are no match for the power of the Armenian lobby in the US. The way this lobby managed to organize a "revolution" in Yerevan in 2018 and "take Armenia out from under Russia's nose", so that Russia, in fact, continues to feed, provide and protect a geopolitically hostile country, is the clearest proof of that.

In the light of the forthcoming unblocking of communications and normalization of Armenian-Turkish relations, both the Armenian lobby in the United States and pro-Western circles in Armenia have markedly intensified.

The first thing they recalled was the Armenian nationalists' territorial claims to Turkey and the notorious Treaty of Sevres, which, as is well known, provided for the creation of so-called "Wilsonian Armenia" (named after the then US president Woodrow Wilson) mainly on the lands of Eastern Turkey.

For example, in the video posted on December 28, 2021 on pro-Western Armenian YouTube channel "Lightning" titled "US reminded about Turkish-Bolshevik occupation of Armenia: where the Armenian-Turkish process will start" one can already see Akhalkalaki "redrawn" on the map:

The video talks about Turkish-Armenian relations, recalls the Treaty of Sevres and "unobtrusively" shows the portraits of Woodrow Wilson and Kemayal Ataturk against the background of the map of "Sevres Armenia", which includes the so-called "Javakhk", i.e. Georgian Samtskhe-Javakheti. Then another map is shown with territorial claims by Armenian nationalists for the entire eastern half of Turkey and there too Samtskhe-Javakheti as 'Javakhk' is shaded as 'Armenian'.

Such maps appear regularly and not accidentally, as evidenced by the video clip posted by the same youtube channel "Lightning" the next day under the title "The US changes its policy towards Armenia: the Russian General Staff has already drawn the borders without asking our opinion":

There is again a map of "great Armenia" with "Javakhk", i.e. the Georgian Samtskhe Javakheti.

Obviously, even using their influence in the United States, the Armenian nationalists have no chance either to return the annulled Treaty of Sèvres or to get anything from their territorial claims against Turkey. But with regard to Georgia, taking advantage of the fact that the country is significantly weaker than Turkey and that it has already set precedents for separatism, occupation and redrawing of borders, they obviously have quite concrete plans.

In Russia, the Armenian lobby frightens Russians with Georgia's membership in NATO, while in the same US Armenian lobbyists accuse the Georgian authorities of not being "democratic" and "tolerant" enough.