Does Armenia “break the corridor” to Batumi? 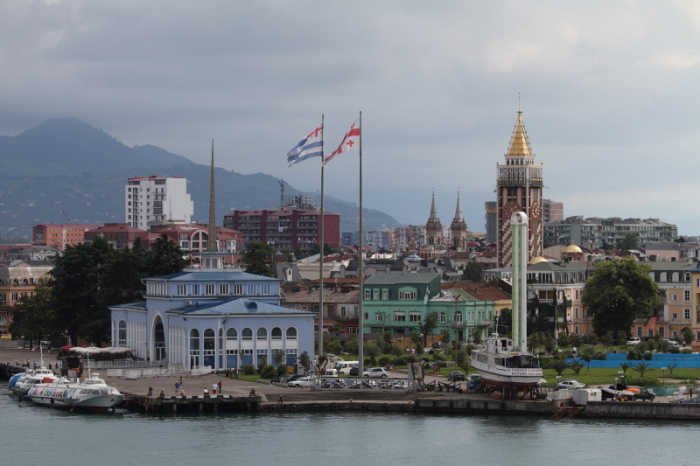 As it is known, in their manic intention to build a “Great Armenia”, Armenian nationalists considered and consider three directions of aggression:

1. Western (claims to the east of Turkey),

It is clear that Turkey is clearly too hard for Armenian nationalists. The same situation was on the eve of the collapse of the USSR.

Two directions remained - "Artsakh" and "Javakh". When voting the leaders of Dashnaks by a margin of just 1 vote, the “Artsakh” won and this marked the beginning of the well-known tragic events - the Karabakh war, the genocide of the Azerbaijani population, the occupation of 20% of Azerbaijan’s territory, over 1 million refugees launched that fatal voice.

Georgia could have expected the same tragedy (in addition to the tragedy of the Georgians of Abkhazia and the Tskhinvali region) if that voice were on the “Javakhk” side.

However, it is also interesting what arguments cited the supporters of the “Javakhk” spraying of aggression. In their opinion, the most important thing for the Armenian state was to get “access to the sea” to the outside world. Only then, having strengthened, it was possible to attack in other directions.

In the case of aggression against Azerbaijan, this did not work out even theoretically. The seizure of Karabakh without the prospects of access to the sea, many Armenian nationalists considered unnecessary and untimely waste of forces and resources. Nevertheless, having captured the Georgian Samtskhe-Javakheti (“Javakhk” according to the terminology of the Armenian nationalists), they immediately went out on the border with autonomy of Adjara, which adjoined the Black Sea.

Then everything was “a matter of technology”: with the help of the same Russia, it was planned to organize separatism and the total expulsion of the entire disagreement with the separatism of the Georgian population.

Unfortunately, in the two other Georgian autonomies, Abkhazia and the former South Ossetian autonomous region, the Armenian provocateurs were able to carry out such an operation. The fact that over 90% of the population of Adjara were Georgians did not bother the Armenian nationalists at all — they could all be declared “wrong Adjarians” and then expelled or destroyed.

The Armenian nationalists, together with the Abkhazian separatists who had betrayed old Abkhaz-Georgian friendship, could declare the original 43% of the Georgian population of the Abkhaz ASSR to be “wrong” inhabitants of Abkhazia and arrange their genocide. Moreover, so far, Armenia does not allow Georgian refugees to Abkhazia, voting against this at the UN General Assembly.

If the “Javakh” direction of the Armenian aggression won, then there is no doubt that a similar tragedy would have happened to the Georgian population of Adjara too, only Armenians would remain there.

Therefore, when voices are heard in Armenia that through the “Javakhk” and Adjara, the Armenian sovereign will receive an “entrance to the sea” - this in itself is cause for alarm for the patriots of Georgia. Even if at first glance it seems that not all this talk about the “corridor” is economically justified.

It should also not be forgotten that Dashnak Armenia laid claim to Batumi as far back as 1920, when the US and the Entente countries generously promised it Turkish lands, outlining the huge so-called “Wilson Armenia”. And these Armenian dreams about the port of Batumi have not gone away. Especially today, when Armenia is in power - puppets of the same US, led by Nikol Pashinyan. Surely, they remember the former “Armenian-American friendship” at the expense of others in the time of Wilson.

Armenian nationalists have plans to “have access to the sea” and no one has canceled these plans and every year their relevance increases - especially in connection with the growing importance of international maritime trade. Through Turkey, they will not succeed by definition. Therefore, they will take advantage of every opportunity and provocation to “punch” such an exit through Georgia. Moreover, “on the way to the sea” in “Javakhk” they already have a numerous separatist-minded “fifth column”. They have already declared Akhaltsikhe “Armenian”, there is also propaganda of the “Armenian heritage” in Batumi.

Moreover, anything can become an occasion to intensify their efforts in this “Javakhk-Adjarian” direction. Up to “worrying about transit corridors” for “international partners”.

This is exactly the way the Armenian Prime Minister Nikol Pashinyan should characterize the words on March 27 in his parliament that the Armenian side is not only interested in the Ninotsminda-Bavra section, but already in Batumi-Bavra, since the “North-South” road construction project fits into this logic.

It is clear that a discussion began around these words of the Armenian Prime Minister in Armenia itself, which was reflected in the material of the “Sputnik Armenia” publication entitled “Armenia misses a big chance: can the North-South be able to link Batumi and Bender Abbas?” (Https: //ru.armeniasputnik.am/economy/20190328/17858931/armenia-upuskaet-bolshoj-shans-smozhet-li-sever-yug-svyazat-batumi-i-bender-abbas.html).

In particular, Gagik Aghajanyan, director of the largest transport and forwarding company "Apaven" in Armenia, positively appreciated the idea to connect Bender-Abbas with Georgian ports and noted that Armenia could use the already existing route in Georgia and connect the North-South highway with the checkpoint “Bagratashen".

Aghajanyan considers the path to the “Bavra” checkpoint to be losing: the site is located at an altitude of more than 2 thousand meters above sea level, and therefore problems arise in winter with traffic, while the “Bagratashen” checkpoint is 450 meters above sea level, therefore it works without fail. And the way from the checkpoint "Bavra" further goes through the village of Khulo and, in the opinion of Gagik Aghajanyan, is absolutely not suitable for launching cargo traffic.

Of course, if we take into account only the economic logic, then the arguments of Gagik Aghajanyan are convincing. But it’s unlikely that the Armenian political elite enlightened him into their “far-reaching” plans. Including the support of separatism in Samtskhe-Javakheti and the plans for dividing Georgia by capturing not only Samtskhe-Javakheti, but also Adjara in order to get “access to the sea” for Armenia. In this case, the Armenian strike can go along the direction of “Bavra-Batumi”, even if at first glance it seems “economically unprofitable”.

The excessive activity of the Armenian lobby in Samtskhe-Javakheti and Adjara, as well as the “transit plans” through these territories cannot be ignored. At any time, Dashnak plans to “break the corridor to the sea” through Georgian lands can begin to be implemented - and this in itself is mortally dangerous for Georgia.