20 thousand Karabakh Armenians have already "quietly" settled in Abkhazia. The rest are on the way 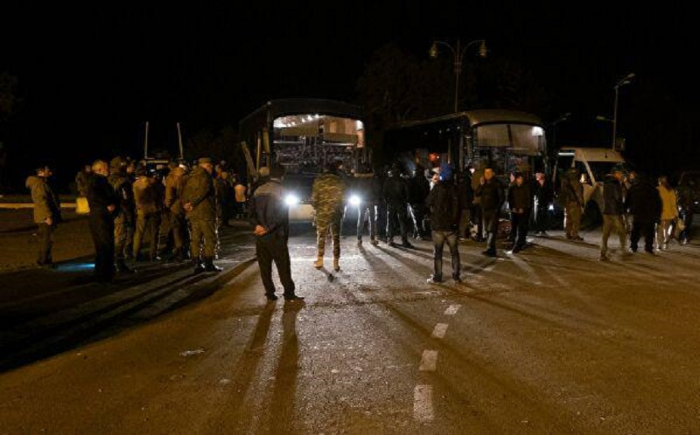 The "Armenization" of separatist Abkhazia has gone too far and has become irreversible. This is evidenced by many indirect signs. But since the separatist statistics are deliberately distorted, and the separatist authorities are completely dependent on the Armenian lobby (and all separatist media), the majority of Abkhazians really have no information that they are in Abkhazia - already a hopeless minority compared to the Armenians.

Although “officially” there are “more than 50%” Abkhazians in Abkhazia, it is enough to walk along the streets of Sukhumi or Gagra, which “in the non-resort season” in terms of the ethnic composition of the population more resemble the streets of Yerevan, to understand that this is far from the case.

The "final stage" of the Armenization of Abkhazia was launched by the current Karabakh war. Moreover, the loss of this war was foreseen by the Armenian lobby even before it began, and accordingly, the process of "quiet" settlement of Abkhazia by the Karabakh Armenians began long ago and "without unnecessary noise." It sharply intensified with the outbreak of hostilities in Karabakh on September 27, 2020. As a result, the Armenian community of Abkhazia in fact has already replenished with at least 20 thousand Karabakh Armenians (in addition to the actually already exceeding 110 thousand community of Abkhaz Armenians).

Abkhazian Kristina Avidzba, in particular, writes about how representatives of the "ancient long-suffering people" from Azerbaijani Karabakh move to Georgian Abkhazia in the article "The Armenization of Abkhazia: a new round may be the last" (https://accentnews.ge/ru/article/28351- armenizatsiia-abkhazii-novyi-vitok-mozhet-okazatsia-p? fbclid = IwAR0X0jPxOb-4WbP7sGGDoAuOotSdnXiWoqYS3gzft7m2ac5spnV1i3UYzXE). We give it in full:

“No sooner had the ink cooled down on the application for resigning from the post of presidential aide, when Akhra Avidzba set about organizing a corridor for refugees from Artsakh [Nagorno-Karabakh - ed.]. “In a difficult situation, we must lend a helping hand to people, as our ancestors did many times in our history!” He wrote on his Facebook page. However, his appeal only caused a flurry of negative comments from the residents of Abkhazia, who not only did not support the call of the ex-assistant but also accused him of creating a national threat against his own people.

“I don’t know for whom you are trying harder, gain political points for the future, or want to lead us into collapse, but you must understand that accepting refugees, the state must commit itself to their future. And our state cannot feed its half-starved citizens, let alone refugees from Armenia! ”, Wrote the angry citizens in their comments.

“Did you study the forecasts of the latest demographics of our people in order to offer something ?!”, wrote the user Inga Gulia.

“We don't need new refugees here, it's enough, how many there are. We must return our brothers from Turkey, Syria, etc. With all due respect to the Armenians from Karabakh, they have their own huge homeland. I am categorically against the fact that they will come here, this will inevitably lead to a conflict, "- said the user Astik Khashba.

Most of the fears of the residents of Abkhazia are associated with the increasing influx of persons of Armenian nationality into the republic. All of them in Abkhazia found not only their shelter but also received Abkhaz citizenship, national passports and even got a job. According to some unofficial data, the number of the Armenian population has increased so much that for several years it has exceeded the Abkhazian part of the population several times.

“The Armenians have already occupied the Gagra region completely. There are almost no other nationalities left. Moreover, they settle in remote villages, but they prefer the sea coast most of all, ”said our interlocutor Aleksey. According to the man, most of the Armenians living in Abkhazia are from Karabakh, and they settled in the republic long before the start of the last hostilities.

The scheme for the settlement of Abkhazia by persons of Armenian nationality is very simple and financially not very expensive. At the head of all this relocated system is Ruben Tatulyan (the same "Robson"), a well-known not only in Russia, but also beyond its borders, a former athlete, and now a major businessman and philanthropist. According to some information, Ruben Tatulyan became the "overseer" of the criminals and the successor of the murdered "thief in law" "Ded Hasan". Having received the nickname "Robson", the former athlete, with his firm hand, promotes the interests of the underworld and the Armenian diaspora in all power structures of Russia. So, Tatulyan is in charge of the so-called "aid fund", the funds from which are allocated for the settlement of Armenians who want to move from their historical homeland, for example, to Abkhazia. And we are not talking about a dozen or even a hundred people. During the operation of the Tatulyan "fund" of support, more than 20 thousand people were resettled from Armenia to our republic alone.

In Abkhazia, the affairs of the arrived people are in charge of the head of the Armenian community. Now, this post is occupied by the Hero of Abkhazia Galust Trapizonyan. He is given the data of citizens to whom he must subsequently prepare places for living with the subsequent issuance of passports. The newcomers are settled in houses in which they live for about six months. That is how much time Mr. Tatulyan and his assistants need to acquire all the necessary official documents. But do not think that citizens who have arrived from Armenia are huddled in small rooms in anticipation of a better life. In fact, temporary dwellings are a territory of 2-3 hectares enclosed by a high fence, on which modern two-story houses are built. On one site - up to 8 houses.

An outsider has no right to get inside the premises, and if you still manage to be there, expect trouble. For such special cases, the Armenian community has its own kind of "alarm button", which activates all possible forces in the area within a few minutes. First, a crowd of Armenian citizens, dissatisfied with your visit, will gather near you, but only from among the local residents, and only later, law enforcement officers will appear who will be most interested in the reason for your visit, your documents, and all your ins and outs.

Today, again according to unofficial data, there are already about five such temporary dwellings for migrants from Armenia in the Gagra region of Abkhazia alone. Imagine, a whole colony of citizens with families lives on vast territories, which will join the ranks of the inhabitants of Abkhazia in another month. But this process does not go completely without a trace, since most of the Armenians who come to Abkhazia do not speak Russian sufficiently, and some do not speak Russian at all. In order to avoid additional attention and questions, the Armenian community has to leave such people in temporary dwellings for a longer period of time.

“I don’t believe that no one in our country knows about what is happening. The Armenians flooded Abkhazia and there are already more of them than us - the Abkhaz. At this rate, Abkhazia will soon become completely Armenian and nobody cares! They are given passports for a lot of money, they get a job, and our authorities turn a blind eye to all this. For Abkhazia and Abkhazians, all this is fraught with very serious consequences, do they really not understand this ?! ”, - a resident of Gagra, Leon, is indignant.

Indeed, a wave of protest against people of Armenian nationality uncontrollably moving to Abkhazia periodically comes up on the agenda. However, the matter does not go beyond angry indignations on social networks. As soon as such conversations gain momentum, veterans of the Patriotic War enter into the dialogue, who, playing on the patriotic feelings of the Abkhaz, reminds of the help and support that the Armenian population rendered to the people of Abkhazia during the war. That is how it is, but the heroes of the war do not want to understand in any way that such actions are causing Abkhazia more harm than enemies. The republic has always been multinational, but this does not mean that using the weak work of its state bodies, it is possible to turn around all kinds of dark deeds, populating vacant territories with their compatriots. State bodies cannot openly influence the situation headed by Ruben Tatulyan, which is why, apparently, several years ago they introduced an unspoken ban on the issuance of citizenship and registration to persons of Armenian nationality. At least that was the case 5-6 years ago. But apparently, they managed to cancel the tacit instruction, otherwise, how can the increased number of migrants from Armenia and their receipt of national passports of Abkhazia be explained?!

One way or another, the Abkhaz society has repeatedly spoken about the impending demographic catastrophe due to the increased number of Armenians resettled in the republic. But all this time, the aspirations of the people were like a voice crying in the wilderness.

Akhra Avidzba's idea of ​​creating a corridor for refugees once again stirred up the people, who for the first time in a long time openly spoke about the demographic problem of the Abkhaz, who, through the efforts of their Armenian patrons on their own land, we're already in the minority. And if the authorities of the republic do not take serious steps in this direction, the ancient Abkhaz ethnos can dissolve in the general international mass, the majority of which in Abkhazia will be Armenians. " End of the article.

The outlook for the Abkhaz is bleak. The most important thing, as can be seen from the material, is that the Armenian newcomers are well organized - the Abkhaz are disunited. The process of the influx of Armenian settlers not only does not think to stop, but, firstly, with the surrender of Armenia in Karabakh, it becomes more and more intensive, and secondly, the close-minded Abkhaz “bought” by the Armenian lobby, like Akhra Avidzba, joined it.

Those of the Abkhaz who work in the separatist government pass the “test of loyalty” to the Armenian lobby and if they start to hinder the Armenians in something, they are simply thrown out of there, replaced by “loyal” or even ethnic Armenians.

In despair, Abkhaz patriots are already "indignant" on social networks, but who hears them? Moreover, it becomes dangerous. Armenian nationalists have already become, in fact, the "masters" of Abkhazia and very quickly can calculate and destroy those who are outraged by the dominance.

The fact that 20 thousand Armenians managed to settle in Abkhazia "without unnecessary noise" suggests that approximately according to the same scheme, i.e. very quietly and without "advertising" the process they will settle the remaining "Artsakh" Armenians in Abkhazia. And also those who wish to settle near the Black Sea of ​​Armenians from Syria, Lebanon, and from the Republic of Armenia itself plunging into poverty and despair. There may be 200-250 thousand Armenians in Abkhazia by next summer.

When Abkhazians "wake up" it will be too late. There are actually only 60 thousand of them left on their land, no more. Moreover, most of the Abkhaz youth are unemployed, criminalized, and demoralized. By definition, she will not be able to oppose the aliens. The most active can simply be destroyed with the help of the puppet separatist authorities and the occupation special services under the pretext of “fighting crime” or as “Georgian agents”. Therefore, the question of the soonest de-occupation of Abkhazia is the question of saving the Abkhaz ethnos - no more, no less.