Has Lukashenko legalised the gift of Pitsunda to Putin or is he building USSR-2 with the inclusion of Georgia?  May God prevent it ! 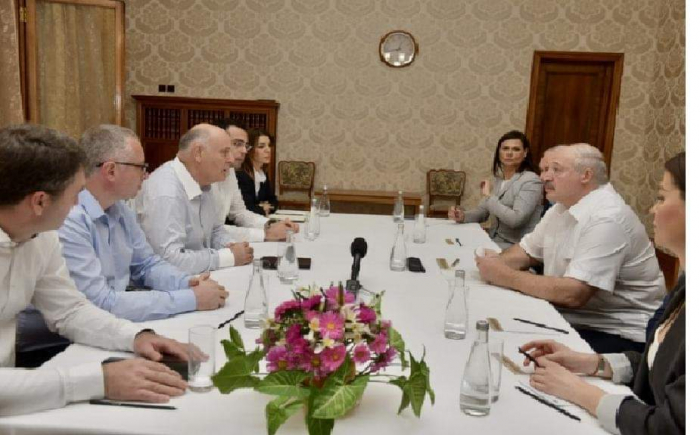 The unexpected trip of Belarusian President Alexander Lukashenko to occupied Abkhazia and his meeting with the separatist leadership raised many questions. In principle, the position of both Lukashenko and his "big brother" (as he himself put it) Vladimir Putin today is not such that, given the current defeats of the Russian troops in Ukraine and the forced total mobilisation in the Russian Federation, they should deal with third-rate separatist territories. Which Russia loses anyway in the event of the collapse of its Ukrainian adventure.

It is clear that Lukashenko's trip to Abkhazia exactly to the state house in Pitsunda "of itself" solved the question of the complete transfer of this territory of Abkhazia under the Russian jurisdiction. There is no doubt that the separatist "parliament" will ratify the agreement on such transfer in the near future. And those Abkhazians, who from now on will be against the transfer of Pitsunda, will be accused that they are "working for Georgia" and "against the recognition" of Abkhazia. After all, there is an argument - the fact of Lukashenko's visit to Pitsunda. And a hint that more important guests are to arrive, which, they say, will ensure "international recognition" of the separatist territory.

Although, by the way, Lukashenko did not say a word about the so-called "recognition of Abkhazia" and did not even hint at such a possibility. But he called the residents of the separatist territory (including murderers and looters) "saints". This was actually "high-level trolling", almost a mockery. Those who know the Belarusian president well understood his words exactly this way. And here the question about confession falls away automatically, because really, why do the "saints" need confession too?

An interesting version of the reasons for Lukashenko's "tourist trip" to separatist Abkhazia was put forward by Georgian political analyst Gela Vasadze, who published his thoughts on Facebook:

"The option that Lukashenko came to negotiate for mobilisation or a state house in Pitsunda does not seem workable to me, frankly. It's petty, Khobotov! He may be a pariah, but he is still the president. So I have only one version (exactly the version) - Lukashenko came to Abkhazia to talk (persuade) the collaborating authorities into a union state... Yes, exactly a union state of Abkhazia, Georgia and South Ossetia.

This is not nonsense, but a form of normalization of relations between Russia and Georgia through the initiative of Moscow to create a kind of union, a la federation. Whether it will be realized in practice or not is not so important. Moscow needs a breakthrough in relations with Tbilisi, and such a breakthrough, which will allow to geopolitically cut off Azerbaijan from Turkey and block Armenia's attempts to go west. It is clear that this is impossible without "solving" the problems with the occupied territories. And in this case Russian troops may well leave Sukhumi and Tskhinvali, moving to familiar Batumi and Akhalkalaki. At that Moscow sees opening of the railway through Abkhazia as a small, but pleasant bonus.

But here's the trouble, it turns out that making the same Abkhazians hate Georgians is much easier than making them suddenly love us. So for this thankless, difficult mission, Lukashenko was chosen. But who else? Again, this is just a version, but, as far as I am concerned, quite a working one.

Well, the moment with the list of possible guests that confused us is nothing but a hint to Georgians - do not think that Russia will weaken and Abkhazia will fall into your hands like an over-ripe pear, there are other countries, leaders of which may come to Sukhumi ...".

Gela Vasadze is slightly inaccurate regarding the opening of the railway through Abkhazia. It is seen not so much in Moscow as in Yerevan and Echmiadzin, and not as a "small but pleasant bonus" but as a task of paramount importance. In fact, all the plans of the Armenian revanchists and nationalists today depend on ensuring the transit and direct railway corridor between Russia and Armenia, for them it becomes a matter of life and death - no less.

After all, with the defeats "on the Ukrainian front" it is obvious that Russia will be forced to withdraw its badly needed there, but now logistically isolated military units from Karabakh and possibly from Armenia as well. On the contrary, a new occupation of Georgia, or its inclusion into the "union state" (in fact, puppet state in relation to Moscow) would give Putin a much-needed "victory" against the background of the Ukrainian defeats. All the more so because on the basis of such a "Union State" and the so-called "Union State of Russia and Belarus" it is quite possible to build a "USSR-2". May God prevent it !!!

Ultimately, it is the Armenian lobby that may well be able to use the Russian military machine to implement such plans by organising a new aggression into Georgian territory. But previously it might indeed try to persuade Georgia "amicably" to a "union state" dependent on Russia with deployment of Russian bases there and "military transit" to Armenia, to transit through Abkhazia, to surrender its sovereignty and de facto abandonment of the occupied territories.