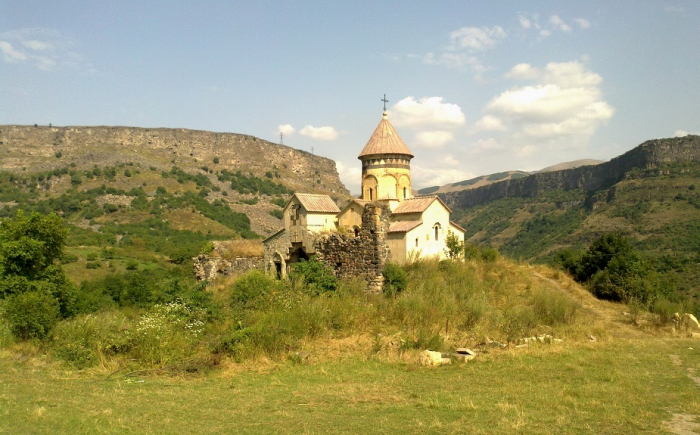 "Do not dig a hole for another - you will fall into it yourself." This Russian proverb best describes the policy of Armenian nationalists towards Armenia's neighbors. All they do is "divide" the territories of neighboring states and expect their disintegration, supporting separatism and outright terrorism.

It is well known that Armenian nationalists dream of dividing Azerbaijan and Turkey. But they also deny the Georgian state the right to exist.

It is enough to read the Armenian and pro-Armenian resources regarding Georgia, then there is only this and it is said that Georgia should be divided. Moreover, the Georgian "Samtskhe-Javakheti" is supposed "the original Armenian Javakhk". It is clear that Armenian nationalists simultaneously support the Sukhum and Tskhival separatists and write about these primordially Georgian lands only about the "independent" Abkhazia and the so-called. "South Ossetia".

However, after the crushing defeat of the Armenian invaders in the 44-day war in Karabakh, they need to think not about how to "divide" neighboring countries, but about how to preserve their statehood.

Thus, in an interview with Oxu.Az, Russian military expert Aleksey Khlopotov admitted for the first time that with their “Great Armenia” and attempts at revenge, Armenian nationalists could finish badly and lose even what they now have.

“Having received a“ tool ”in the form of a restored army, Armenia can go to military provocations in order to present Armenia as a victim. It seems to me that for the Armenian side it will end in tears. Azerbaijan, of course, will regain control over the entire territory of Karabakh. And if it is necessary to end some confrontation once and for all, Baku will have to take Yerevan. And then, already from the position of a winner, to establish in Armenia some kind of loyal government, or the territory of Armenia - some kind of artificial formation, can generally be divided between Azerbaijan and Georgia, ”said Aleksey Khlopotov.

As an expert who is well aware of the Caucasian realities, Aleksey Khlopotov most likely understands perfectly well that a state called the "Republic of Armenia" was created on the primordially Azerbaijani and Georgian lands. Including historically Georgian lands in the north of the Republic of Armenia, in particular, the historical region of Lori, illegally transferred by the Bolsheviks to the Armenian SSR.

There are dozens of Georgian churches and monasteries, including such as Khnevanki, Kobairi, Akhtala. Illegally seized by Armenia and located on the border of the historical Georgian lands of Lori and Kvemo Kartli, belonging to the last Georgian monastery of Khujabi.

In principle, there are still chances that the Armenian side will come to its senses and move on to a constructive policy of building peaceful and good-neighborly relations with the states of the region, and renounce revanchism and support for separatism. However, it cannot be ruled out that Yerevan will embark on another adventure, which for it will end in collapse, too.

And Georgia must be ready to take responsibility for the historical Georgian land of Lori and its shrines, which is enslaved by Armenia. Moreover, as a multinational state, Georgia will be able to ensure the rights of both the ethnic Armenians living in Lori today and the descendants of the indigenous population expelled from this land by Armenian nationalists.