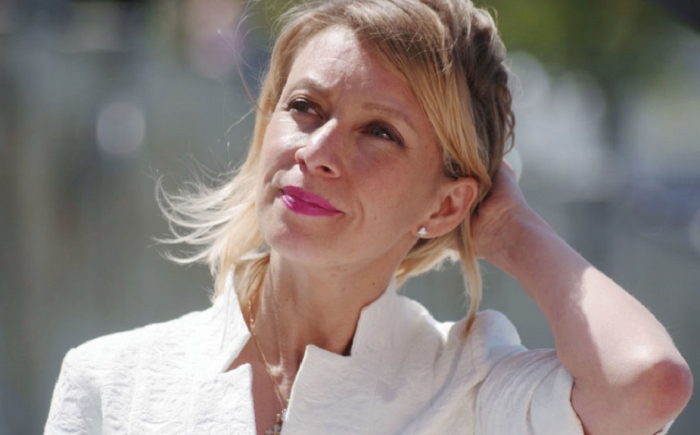 The subordinates of the Armenian nationalist Sergey Lavrov (Kalantarov) who heads the Russian Foreign Ministry launched simply indecent diplomats for simultaneous campaigns of throwing mud at Georgia and "praising" Armenia. Especially tourist trips to the last.

The press secretary of Kalantarov, the official representative of the Russian Foreign Ministry, Maria Zakharova, “distinguished”, who arrived in Armenia to participate in the Armenian-Russian consultations (that is, this is not a vacation, but an official trip while on duty). But Zakharova’s reviews of Armenia are more characteristic of the “tricky” travel agency than for the foreign ministry official.

It is enough to read her posts about Armenia on Facebook.

“In Yerevan. The soul has flown to heaven”

“One practical advice to those who go on holiday or to friends in Armenia. Preparing for each feast, stock up at least an hour more time. Otherwise, your plan will not work. Amazing hospitality and cordiality!” - Maria Zakharova so enthusiastically describes her stay in the Republic of Armenia, clearly and persistently inviting Russian citizens to come to Armenia.

These posts coexist with the filth that Maria Zakharova (again, regardless of diplomatic propriety) writes to Georgia:

“Everyone ask to comment on the story with the Georgian journalist. Official commentary on the Russian MFA website. What can I say is the misfortune of Georgia. If we talk about the whole situation:

All the talk about the “traditions” of Georgia is talk. Traditions that could become the basis, the support for the country and the people, where the laws are not yet working, unfortunately, are not present today. There is folklore, coloring. No more. Here you have to choose: either “Georgia is Europe”, and then the most severe implementation of the laws, or the restoration of traditions that restrain and regulate. Now there is neither one nor the other”- writes Maria Zakharova.

It is possible to humiliate Georgia by the officials of the Ministry of Foreign Affairs of the Russian Federation. At the same time, advertising tourism and trips to Armenia and praising its “traditions” based on stolen, appropriated and occupied property of others.

It is clear that the head of Zakharova, Sergey Lavrov-Kalantarov, hates Georgia. Obviously, according to his wishes, Maria Zakharova does not miss a single reason to curse Georgia and Georgians.
But it’s obviously so rude and so brazen to advertise Armenia against the background of insults against Georgia - this is simply indecent. But as for diplomats, it is not much different from the rudeness of Gabunia on the air of Rustavi 2.