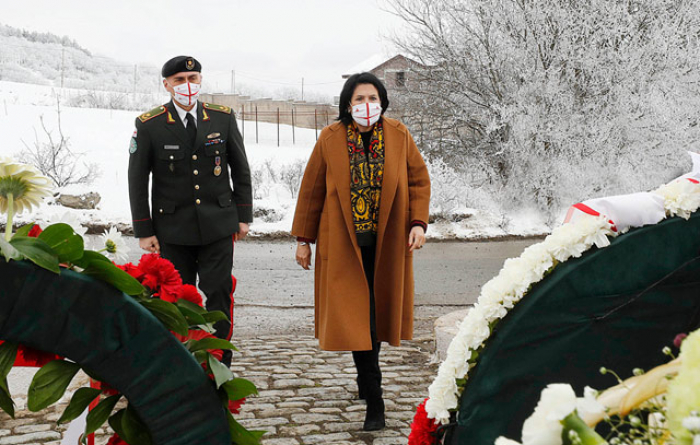 100 years passed since the occupation, the day when the 11th Russian Army marched on Rustaveli Avenue in silent Tbilisi dragging the country in a dark period of 70 years of slavery”, President of Georgia Salome Zourabichvili said in her address on the Soviet Occupation Day.

Zourabichvili said that Georgia remembers each hero who fought for freedom and independence under the national tricolor flag.

“Georgia did not tolerate the occupation. Perseverance is the genetic mark of our national immortality and resilience”, the President said. She noted Georgia is an independent and sovereign state today, but the occupation continues. “Despite the conflicts and war, Georgia continues its European path and building the democracy. It is a victory”, she added.

Earlier this afternoon, President Zourabichvili has visited the Georgian Cadets (Junkers) memorial and paid tribute to their memories.

Georgia marks the 100th anniversary of the Soviet occupation. The Georgian national flags on the government buildings across the country are flying at half-mast on this occasion.

Georgian Parliament declared February 25 as the Day of Soviet Occupation in 2010 to commemorate the hundreds of thousands of victims.

On February 25, 1921, the Russian Red Army seized the capital Tbilisi and overthrew the government elected through universal and free elections. It resulted in the annexation of the Democratic Republic of Georgia.