The experience of Abkhazia shows that separatism must be suppressed in the bud. Battalion named after Baghramyan in Abkhazia - for what purpose? 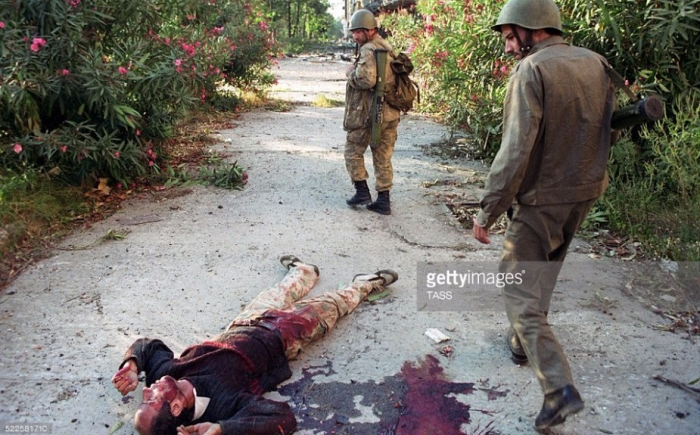 In the memory of Georgian refugees from Abkhazia and participants in the war with separatists in this Georgian territory, there are indelible bloody traces of the atrocities of one of the cruelest enemies of Georgia and the Georgian people - militants from the Baghramyan battalion. This is evidenced by a video in the Georgian language distributed on social networks, telling about the struggle of Armenian nationalists against Georgia and Georgians in Abkhazia and about their cruelty:

The most interesting thing is that during the Second Karabakh War, the Armenian nationalists wanted the Georgian people to forget all this. Nationalists from Hayartun, the “Armenian Union of Georgia” and similar organizations in their messages during the war actively disseminated their video messages - they say “it was a long time ago”, and they say, now “Georgians should“ save Christian brothers ”and“ forget ”about Abkhazia ...

It got to the point that it was hypocritically asserted that, they say, the Abkhazian "Armenians" who killed Georgians were "completely different." And they have a "different dialect", and "the Georgians themselves were to blame for the" aggression "against Abkhazia." Well, the Yerevan and "Artsakh" Armenians, they say, "love Georgians very much," "consider Georgians to be brothers" and the like.

Despite this hypocritical lie, the leader of the “Artsakh” separatists, Arayik Harutyunyan, during the Karabakh war solemnly received Armenian mercenaries from Abkhazia, including militants from the Baghramyan battalion, who arrived through Yerevan. And not a word reproached them that they fought against Georgia!

In fact, in 1992-1993. not only Abkhaz Armenians fought against Georgia in Abkhazia, but Armenians from the very Republic of Armenia from the separatist "Artsakh" and Samtskhe-Javakheti. And all were equally distinguished by atrocities against Georgians. Although it is not possible to find at least some signs that the Georgians in Abazia, even in the slightest degree, somehow infringed upon the Armenians. The Georgians did not even understand why they were being killed and tortured by their neighbors, Armenians ?!

In Abkhazia, the Georgians sheltered Armenians on their land, just as in other parts of Georgia, as they could, they helped them, did not put any obstacle in their identity. The Armenians in Abkhazia lived on the best lands, they were given the opportunity to have their own schools, publications, and develop their culture.

Question: what else did the Abkhaz Armenians lack? Why did they all start fighting against Georgia ?! And not only fought, but showed unthinkable cruelty towards Georgians?

The fact is that the Armenian nationalists did not want to live peacefully on a foreign land with the people who hospitably sheltered them. They "laid eyes" on Abkhazia and decided to get their hands on it by organizing "another" mono-ethnic "Armenia" on the shore of the warm sea. But together there were too many Georgians and Abkhazians. Therefore, the Armenian lobby purposefully set the Abkhazians against the Georgians in order to "cleanse" the land they liked from the indigenous population with their help. And with their atrocities they pursued the goal of the entire indigenous Georgian population to leave Abkhazia (similarly, the savage cruelty of Armenian militants towards Azerbaijanis in Khojaly was also explained).

Well, today in Abkhazia, the Armenians already far outnumber the remaining Abkhazians, who are rapidly degrading and dying out with the complete economic domination of the Armenian community in the separatist territory.

The Abkhaz people, fraternal to the Georgians, were treacherously deceived by them. It was specially organized so that blood was shed between Georgians and Abkhazians. "Baghramyanovtsy" and other mercenary militants specially staged demonstrative massacres of the Georgian population.

All this was done specifically so that the Abkhaz would then be afraid of revenge and so that they would not even have thoughts of making peace with the Georgian people. Say, "after everything that happened, the Georgians will not forgive you." Because, they say, they will not figure out who killed their relatives and friends - Armenian militants or Abkhazians.

It was the deliberate intention, at all costs, to embroil the Abkhaz brothers with the Georgians forever, that explained such brutal cruelty of the Baghramyan fighters towards the Georgians.

And another example: in pre-war Abkhazia there were a lot of villages where Georgians lived on one side with Abkhazians, and on the other with Armenians. In many Abkhaz villages, a certain percentage of Georgians, especially those related to Abkhazians, still remained. But in the former mixed Georgian-Armenian villages there is nothing of the kind.

In the "mixed" Georgian-Armenian villages, which were completely captured by Armenian militants, almost every single person of Georgians was expelled or killed. The same thing happened in the districts that the Armenian militants in Sukhumi and Gagra "chose" for themselves. It is simply not possible to find at least one remaining Georgian family living among the “Christian brothers-Armenians”.

Remembering the tragedy of Abkhazia today is necessary in order to prevent similar tragedies in other parts of Georgia, primarily in Samtskhe-Javakheti. The experience of Abkhazia shows that separatism should be suppressed in the bud.