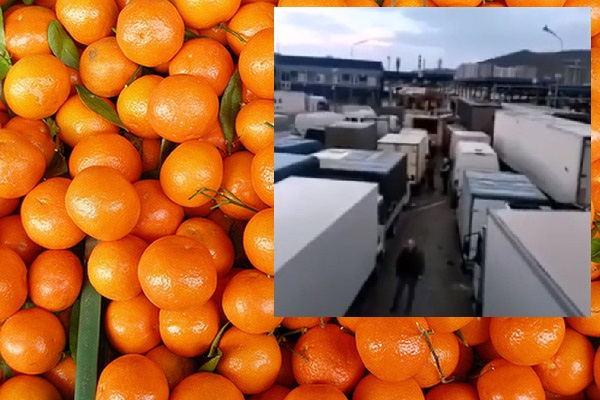 “Sell tangerines and buy bread” - this will be the way for a significant part of Abkhaz families to survive in the near future. There is simply no other income.

The tourist season due to the coronavirus epidemic this year was a failure in Abkhazia compared to the last. Even if someone has earned some pitiful pennies on tourists, they have already been spent or gone to pay off old debts. Mining as an "alternative" way of earning is also "closed". In the midst of a severe energy crisis, the separatist regime banned mining "farms". And even if there was permission, then all the same Abkhazia "plunges into darkness" in the literal sense of the word. Rolling power outages have been introduced in the separatist territory.

As a result, Abkhazians are trying to collect tangerines (including in the “trophy” Georgian gardens) to hand over to dealers for a pittance and with the money raised somehow “stretch out” the cold dark and hungry winter months.

But, in contrast to the past years, the situation with the export of tangerines to the Russian Federation is critical. The Russian customs, as if mocking the separatists, "slowly" inspects and clears the goods, which is why they have organized a huge traffic jam at the border out of the blue.

Trucks with tangerines from Abkhazia cannot cross the border with Russia along the Psou River for several days. During this time, a considerable part of the goods becomes unusable and trite rot. Rotten goods have to be thrown away right at the border.

Experts say bluntly that this is a "political message from Moscow." And the purpose of this message is to remind the separatist authorities of Abkhazia of the need to quickly and fully implement the recently signed new agreement on "cooperation", which many in Abkhazia qualify as a partial start of Russia's annexation of the separatist territory.

The main point that the Kremlin insists on is the so-called "harmonization" of separatist legislation with Russian, within the framework of this "cooperation" agreement. This is a permit for those who do not have separatist "citizenship" to acquire real estate in separatist territory. Or, to put it simply, Armenians from Russia, the Republic of Armenia and the recently liquidated separatist "Artsakh" will be permanently and thoroughly resettled in Abkhazia for a long time.

Those. the hint is more than obvious. And the Abkhazians themselves can feel "the spirit of the Kremlin ultimatums in the villa of the smell of rotting tangerines on the border."

And the Abkhazians who have harvested the harvest of tangerines are forced to literally "sit on a tangerine diet." As soon as there was a traffic jam at the border, dealers sharply reduced purchase prices. Now it is impossible to realize the harvest even for a song. You have to eat the tangerines yourself until they rot. Moreover, there is often nothing else to eat.

Therefore, sooner or later they will “surrender” and the stream of Armenian settlers will rush to “settle down” in separatist Abkhazia, dooming the Abkhazians themselves as an ethnic group to a rapid disappearance.