In separatist Abkhazia, Armenian - "businessmen" will be massively populated into trophy "apartments" 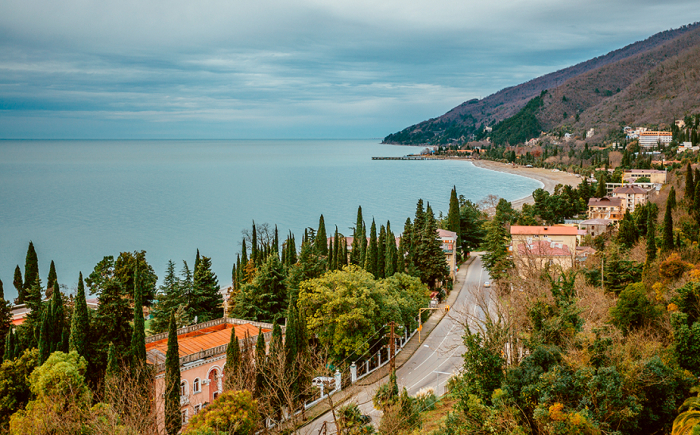 It seems that the separatist Abkhazia has already decided to start populating the self-proclaimed "republic" with ethnic Armenians as massively as possible, without even particularly changing the separatist legislation and without asking special permission from the "Abkhaz patriots" who are beginning to understand that they remain on their land in a hopeless ethnic minority.

Moreover, "time is running out." The Armenian "Artsakh" separatists are fleeing Karabakh, liberated by the Azerbaijani army, in Yerevan they feel cramped and uncomfortable, and although they quickly "settle down in a new place." Better than Georgian Abkhazia, which, in fact, has long been subordinated to the Armenian lobby, you will hardly find land. And in the Azerbaijani Karabakh, where there is no sea, the climate is not as fertile as in Abkhazia.

To quickly populate Abkhazia with tribesmen, the Armenian lobby has already found a “loophole”. This can be concluded if "between the lines" read the material recently published in the "Sputnik Abkhazia" publication "The possibility of selling apartments to foreign businessmen was discussed in Sukhumi" (https://sputnik-abkhazia.ru/Abkhazia/20201102/1031211460/Vozmozhnost- prodazhi-apartamentov-inostrannym-biznesmenam-obsudili-v-Sukhume.html)

Here are excerpts from this material:

“A round table on the creation of priority development territories in Abkhazia was held at the press center of the Apsnypress State News Agency, and the possibility of selling apartments to foreign businessmen and citizens of Russia was discussed.

At the meeting, it was discussed what the possibility of selling apartments to foreign businessmen means, how this form differs from the sale of real estate in the republic...

The round table was devoted to the discussion of the topic, which was raised in mid-October by the chairman of the Association of Women of Abkhazia and the head of the presidential commission on constitutional reform, Natella Akaba. She stated that the creation of priority development areas and the construction of apartments will have a positive impact on the formation of jobs and will intensify economic growth in the republic...

The first to express his opinion at the meeting on November 2 was a member of the Public Chamber, entrepreneur Abesalom Kvarchia, who noted that Abkhazia should take the path of development, and this should be associated with a clear program. He is convinced that there are certain measures that need to be taken in the context of the development of a particular region, including the sale of apartments to foreign businessmen, but not real estate...

Director of the Institute of Economics and Law of the Academy of Sciences of Abkhazia, Doctor of Economics Zaur Shalashaa said that there are both positive and negative examples of joint entrepreneurship of Abkhaz and Russian businessmen in the republic. As an example, he cited cellular companies that have been operating in the republic for many years….
“Selling apartments to businessmen is not new in the world, and as an idea it is not a bad idea,” said the specialist.

Lawyer Frida Lazba also expressed an opinion on the announced topic of the round table, who noted that the issue of selling the country's housing resource causes fear among a certain part of the population of Abkhazia.

"The purpose of the idea for the sale of apartments is to get away from linking citizenship with the acquisition of housing. We have a thriving illegal real estate market, they register for Abkhazians, they are acquired by foreigners, and the state does not receive anything from this and the citizens of Abkhazia do not receive anything from this. The only thing is this illegal one. the system makes it possible for people to come here, buy goods, and so on, thus expanding the consumer market. But we must legalize this, "says Lazba.

At the same time, the lawyer noted that in the Abkhaz society there are fears associated with the acquisition of housing by foreigners.

"Those who propose the idea of ​​apartments are talking about linking this with the development of the regions. I also do not have a ready answer, but I definitely do not agree to link citizenship with the acquisition of housing, because political problems are much higher than the acquisition of resources," noticed the lawyer.

In her opinion, without such projects, such as granting the right to buy apartments to businessmen, it will be difficult to revive the regions of the country that are in economic decline."

In general, everything is clear where everything is going. Is the separatist Abkhazia's economy in complete poverty in need of development? Need! Who can provide it? "Foreign Businessmen"! Including the Armenians from the Russian Federation and the separatist "Artsakh" which is already disappearing into oblivion.

Finding an ethnic Armenian who doesn't have business talent is difficult. So, they will calmly settle in and "legalize" in separatist Abkhazia as "businessmen".

Thus, the massive sale to the newcomer "Artsakh" and Krasnodar Armenians as "businessmen", taken away from the exiled indigenous Georgians of housing, and which according to the documents will go as "apartments" (including as "newly built" on paper, so as not to have claims from the legitimate owners) is already an almost resolved issue. This does not even require amending the separatist "constitution".

However, in the Gagra, Gulripsh, Sukhumi and regions and in the city of Sukhumi, there is already an overwhelming majority of Armenians. They will prevail very soon in all other regions of Abkhazia. Except perhaps the Gall region, in which the Armenian "masters" of the separatist territory will create a kind of ghetto for the "Christian Georgian brothers" deprived of any "Christian brothers", as well as the Abkhazians deceived by them and deprived of land.

It is clear that many Abkhazians are alarmed by the possible influx of Armenian settlers, the path under the guise of both refugees and "businessmen". What can they do?

Financing of the separatist Abkhazia is completely dependent on the Armenian lobby in the Russian Federation, led by ethnic Armenians Lavrov (Kalantarov) and Mishustin. They specially led the Abkhaz separatists to ensure that further financing from the Russian budget of their pseudo-“state” is fully linked to how quickly and irreversibly the “Armenization” of Abkhazia will be carried out.