"Javakh" militants from the liquidated separatist "Artsakh" will appear in Georgia earlier than expected. 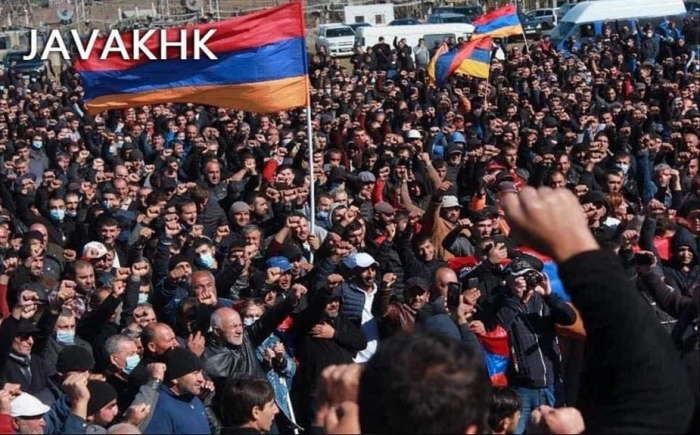 The war of liberation in Nagorno-Karabakh and nearby territories, which Azerbaijan is waging with the Armenian armed forces that have occupied its territory for more than 27 years, is drawing to a close. The pace of the Azerbaijani army's offensive against the positions of the Armenian invaders, terrorists and "Artsakh" separatists is becoming more and more impetuous.

In fact, with the liberation of Gadrut and Fizuli, the front of the Armenian aggressors in Karabakh began to "burst at the seams." The militants, gathered from all over the world to keep the Azerbaijani lands under occupation, understand that things are already hopeless in "Artsakh", they abandon their positions and simply save their skins. Many of them have already decided for themselves that the "Artsakh" war is hopelessly lost, the "miatsum" has completely failed, and it is urgent to prepare for a new war.

It is also not necessary to guess where the next war of the Armenian aggressors will be. From the Armenian side, Armenians who have arrived from Georgia take part in the hostilities, both from the region, where ethnic cleansing of Georgians has been carried out largely with the help of Armenian militants and a separatist-occupation regime has been established - Abkhazia, and from Samtskhe-Javakheti.

As a result of Azerbaijan's liberation of its occupied territories, the separatist Armenian groups will return back to Georgia. Upon their return, these groups will unite with groups of Armenian nationalists "on the ground" for destructive activities on Georgian territory.

We must not forget that in Samtskhe-Javakheti, thousands of separatists, already ready for hostilities, were enrolled in illegal militant formations and rushed to Karabakh. But they were not allowed by the Georgian border guards through the Georgian-Armenian border.

Now these, in fact, formed detachments will await "combat mentors" who have experience of military operations, kicked out of Azerbaijani Karabakh. So that at the first opportunity to raise a separatist rebellion against Georgia, which will be 100% supported by official Yerevan and the regular Armenian army.

The "Artsakh" direction of the Armenian aggression failed miserably, but the aggressive essence of Armenian nationalism has not gone anywhere. As well as the intention to "fuse" battered terrorists and militants into a new war. Otherwise, they will simply overthrow the current regime in Yerevan, accusing it of military defeat. Most likely, the same thoughts are beginning to prevail in the Armenian leadership. It is no coincidence that the Prime Minister of Armenia Nikol Pashinyan himself posted on his official Facebook page photos of gatherings of separatists in Georgia with the inscription "Javakhk".

The preparatory work to "justify" such aggression is already in full swing. All Armenian media are literally overwhelmed with hatred of Georgia and Georgians, accusing our country of “betrayal”, since it did not succumb to the pressure of the Armenian lobby and did not allow the transit of weapons and militants.

With regard to Georgia, the Armenian nationalists do not even hide their territorial claims. An example is the organization "Azat Javakh", which in 2009 already advocated the annexation of Javakheti to Armenia. Today active "Javakhk" separatists are already fighting with might and main in Karabakh and are spreading their photos through social networks. For example, the notorious separatist Vahagn Chakhalyan, who from the very beginning of the Karabakh war, together with his comrades-in-arms, “promised to return” to Georgia so as not to fight against. Most likely, the return of the surviving separatists will take place earlier than the time originally planned by them.

The activities of the Armenian militants returning to Georgia will lead to armed actions of the separatists, for which official Tbilisi should be ready today. Judging by the latest trends, not months, but a few weeks remain until the complete liberation of Azerbaijani Karabakh. Pashinyan's regime will not keep the militants driven out of there for a long time - this is very dangerous for him. Chakhalyan and militants like him can be transferred to the territory of Georgia "without stopping." And in Samtskhe-Javakheti, they are already awaited by like-minded people - separatists and underground arms depots.

Question: what does official Tbilisi intend to do, what steps will be taken in case of intensification of the activity of Armenian separatists on the territory of Georgia? Are the Georgian authorities ready for an escalation and attempts at territorial claims by fighters of Armenian origin from Nagorno-Karabakh and Armenia? And not only the "Javakhk" - after all, with them to "recapture" Georgian lands after they were thrown out of the Azerbaijani lands, all the Armenian terrorist rabble from all over the world, including such organizations as ASALA, will rush. Not only armed actions by separatists in Samtskhe-Javakheti are possible, but also terrorist attacks, as well as sabotage, primarily against strategically important transit communications. The Georgian patriots and the Georgian state should be ready for such a negative development of events now.

There is little time left. After all, many militants can appear in Georgia without even waiting for the complete defeat of the Armenian occupation army in Karabakh.