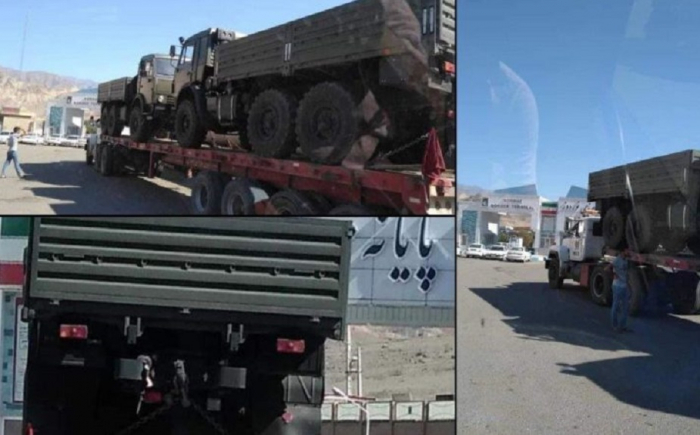 Many serious international analysts speak about the threat of the Third World War today. And there is a huge risk that this war will be nuclear.

Iran has long been considered as the “ignition point” of the Third World War, but the likelihood that the South Caucasus will also be the epicenter is not excluded. This became especially evident after the provocation of the Armenian aggressors, who continued the occupation of 20% of Azerbaijan, this time in the Tovuz region on the section of the internationally recognized Armenian-Azerbaijani border. In Yerevan, they did not even hide the fact that the provocation was aimed at drawing Russia into the war as "Armenia's ally in the CSTO."

The fact that this can eventually lead to the Third World War does not seem to scare the Armenian nationalists at all, they want to organize their "Great Armenia" at any cost. Even if half the world burns in a nuclear fire.

After all, we must not forget that it was the very same Armenian nationalists who greeted the beginning of the First World War with such enthusiasm - the fact that millions perished in this massacre did not bother them, they had a goal - the collapse of traditional empires and the organization of the same “Great Armenia”. Then the plans of the Armenian nationalists, despite the collapse of the hated Ottoman Empire, did not come true. Moreover, the war merged into a tragedy for the Armenian people themselves, but apparently history teaches nothing to the maniacs obsessed with nationalist myths.

However, it seems that the "tandem of the instigators of the third world" has recently found mutual understanding. The matter concerns the organization of massive supplies of Russian weapons to the Yerevan regime through the Armenian-Iranian border in exchange for helping Yerevan in the implementation of the Iranian nuclear program. Fortunately, the most dangerous nuclear facility in the world, the Metsamor NPP, is being operated on the territory of the Republic of Armenia in violation of all safety standards. Being, like all nuclear power plants built in Soviet times, a "dual-use" facility, the Metsamor power plant can be used to enrich nuclear materials intended for the manufacture of nuclear weapons.

Taking advantage of the fact that the world community was distracted by the coronavirus pandemic, Tehran, with the help of Yerevan, sharply accelerated its nuclear program and, apparently, there is not much time left for Iran to possess a full-fledged nuclear weapon. At the same time, Iran is helping Armenia to foment a regional conflict that has every opportunity to develop into a "big war" by organizing the supply of weapons.

The material by Ali Hajizadeh, published on the tgme.org resource "How Iran helps Moscow to arm Armenia ..." gives cause for concern (https://tgme.org/2020/09/how-iran-helps-moscow-to-arm-armenia/?fbclid=IwAR29KEJIYkBmD6ltkJgcQIEQa9-40vt09w2R4Fsk_ES4bVZ4yo3Rr87APC8).

“More and more details emerge in connection with the scandal with the supply of Russian weapons to Armenia. Recently, Western media reported that some of the weapons are being transported through Iranian territory. In general, this was not a secret for many observers in Baku, including me. Iran provides its airspace as well as its territory for the transportation of military equipment and weapons to Armenia. Moreover, Iran is supplying fuel to the army of the so-called "NKR". And Armenia, in turn, allows the transportation of materials for the Iranian nuclear and missile programs through its territory. In addition, the Islamic Revolutionary Guards Corps (IRGC) established a channel for the supply of drugs to Europe through Armenia and the occupied territories of Azerbaijan (obviously in exchange for something).

When information about transportations through the territory of Iran became public, the Iranian embassy in Baku denied this issue. But the facts speak for themselves. And photos of the transportation of Russian weapons across the Iranian-Armenian border appeared on the Internet. An interesting detail: during the hostilities in Tovuz, after it became clear that the provocation of the Armenian side had failed, official Tehran began to declare its support for the territorial integrity of Azerbaijan. It should be noted that for the Iranian regime it is quite normal practice - verbal declarations of friendship, but in practice - attempts to destabilize the situation in Azerbaijan and support Armenia".

As we can see, if the regime in Tehran demonstrates unprecedented hypocrisy in relation to the people, whose representatives constitute, according to various estimates, from 30 to 40% of the population of the Islamic Republic of Iran (Azerbaijanis), then it will be no less hypocritical before the world community. On the one hand, declaring about "peacefulness" and the suspension of the nuclear program, and on the other, with the help of the same Yerevan, acquiring full-fledged nuclear weapons, which it may well use in the event of another aggravation of the situation in the Middle East.

At the beginning of 2020, the world was already on the brink of a major war in the Middle East, and it was heading towards Iran, on the one hand, and the United States and its allies, on the other, with massive mutual strikes. But the unexpected crash of a Ukrainian passenger plane that flew out of Tehran and was mistakenly shot down by the Iranian air defense (preparing for American raids) led to the inhibition of the military scenario (hence the question - was the Ukrainian Boeing crash deliberately set up).

The situation in the world today is much more complicated. The coronavirus epidemic has caused the global economy to collapse. The contradictions between the main geopolitical players have sharply escalated. Therefore, there are more and more temptations to kindle a "big war" among certain circles.

Apparently, the regime in Yerevan is simply obsessed with the intention to help ignite such a war. And as the "first victim" of this war (and, accordingly, the "prey" of the Armenian nationalists), strategists from Yerevan have planned Georgia. It is through the territory of Georgia that the Armenian lobby is clearly preparing to break through the "military corridor" from the already occupied Georgian territories.